Greetings, radio amateurs- homemade products !
Various sound-reproducing equipment, in particular, amplifiers, are demanding on power supply – if any ripple occurs in the constant supply voltage, they immediately penetrate the sound path and are heard in the form of an extraneous whistle or hum along with the reproduced sound. If the amplifier is powered simply from a conventional mains transformer with a rectifier, no problems usually arise, because low-frequency 50 Hz ripple is perfectly smoothed out by ordinary electrolytic capacitors for power supply. The more the power of the amplifier, respectively, the greater the current consumption – the more capacity must be in the power supply to suppress ripple.
The situation is more complicated with the power supply of amplifiers from switching power supplies, because in them transformers operate at higher frequencies, as a rule, it is several tens of kilohertz. The trouble is that getting rid of such ripples is somewhat more difficult, they can penetrate the sound path even though an impressive battery of electrolytic capacitors is installed on the power supply. In these cases, small ceramic capacitors with a capacity of 100 nF – 1 μF are often installed in parallel with them, they work better at high frequencies and suppress high-frequency ripples better, but often these measures are not enough. Ripple problems also often arise in car on-board networks – although there is a constant voltage, when the generator and the car's ignition system are operating, the voltage in the network is quite significantly “polluted”.
If you look at the power supply circuit of various branded car radios, very often you can see a special filter on capacitors and inductors on the power supply – such a filter is very effective for suppressing ripple at both high and low frequencies, its circuit is presented below.
< a href = "https://usamodelkina.ru/uploads/posts/2021-01/1609685969_3.jpg" rel = "prettyPhoto"> On the Internet, you can find such a circuit by the name “CLC” filter, the name corresponds to its essence – “capacitor-inductance-capacitor”. Voltage is supplied to the left side of the circuit, for example, from the on-board network of a car or from a “noisy” pulse source, it immediately goes to an electrolytic capacitor with a capacity of 1000 μF. After that, as you can see, the plus of the power goes through the choke – the inductor, if you recall physics, it turns out that it has a low, practically zero resistance to direct current, and a sufficiently high resistance to alternating current, and the higher the frequency, the higher the resistance becomes. With a capacitor, the opposite is true – it does not conduct direct current at all, but at the same time it becomes a conductor for alternating current. That is why the capacitor is parallel to the power supply, and the inductance is in series.
You can easily buy a capacitor for this circuit in a store, but you can make an inductance yourself – although you can find suitable copies on sale in radio parts stores. The coil should have an inductance of about 50-200 μH, the rating does not play a special role, and pass a current of at least 1-10A – the specific current value will depend on how powerful the amplifier/car radio will be connected. The current passed by the inductance will be determined by the diameter of the copper wire used, it is optimal to take a diameter of 1 mm, it is flexible enough and easily wound, at the same time it provides low resistivity and allows you to connect powerful amplifiers. The number of turns will determine the inductance of the coil, the rule works – the more, the better, but without fanaticism, about 30-50 turns will be quite enough. As a core, you can take, for example, a ferrite ring with a diameter of about 3 cm, or a small core made of transformer iron, the turns should be wound tightly.
After the choke, there is another capacitor of the same capacity, in series with it there is a small ceramic one, for complete happiness. A load, amplifier or car radio is connected to the output of the circuit, on the right side, you can use such a filter to power any devices that are demanding on the quality of power – these include some peripheral devices from automotive electronics, and using such a filter you can organize a laboratory power supply even with the use of a switching power supply, for example, from a laptop or a printer.
Below is an embodiment of such a filter as a separate unit, which does not take up much space. The choke and capacitors are installed next to each other and wound tightly with electrical tape. 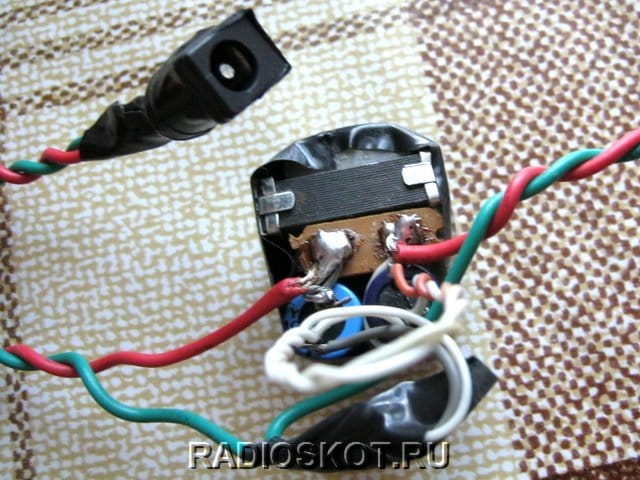 If the source ripple is very large, and even after the CLC filter, noise is heard in the audio signal, you can modify the circuit by adding one or more additional steps, as shown in the diagram below. It will take, respectively, two or more inductances, the size of the structure will also increase, but the ripple suppression coefficient will still grow significantly. 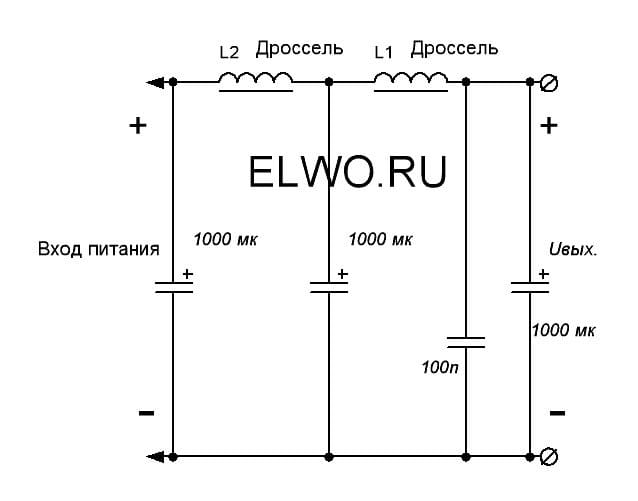 Both on this and on the previous diagrams indicate the ratings of electrolytic capacitors of 1000 μF, however, this value must be selected based on the load power – the greater the current consumption, the greater the capacity should be. It is advisable to set the same or at least close values ​​of the capacitances before and after the inductance.
If you simply assemble this circuit “by eye”, without accurately calculating all the ratings, it will already work quite effectively, but for maximum efficiency you can use special calculators that calculate all values, including the calculated ripple suppression coefficient of the circuit. An example of such a program is shown in the picture below, successful assembly!