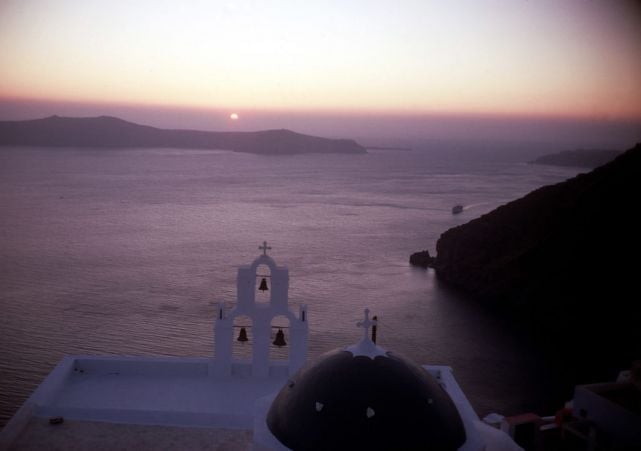 The cupola and bells of an Orthodox church on the Greek island of Santorini (PA), © PA Archive/PA Images

Greece’s powerful Orthodox Church is rebelling against a government order to briefly close places of worship under a week-long drive to tighten virus restrictions before the planned reopening of schools.

The conservative Church’s ruling body issued a statement directing priests to admit worshippers during indoor services for Wednesday’s feast of the Epiphany.

The Holy Synod said it “does not accept” the new restrictions, in force from January 3-10, and would send a letter of protest to the centre-right government.

After Greece saw a spike of new Covid-19 infections and deaths in November, when intensive care units bordered on full capacity, authorities imposed a second lockdown closing schools and suspending much economic and social activity.

The measures were partially relaxed before Christmas, when churches and nonessential shops were allowed to resume some activities, albeit with limitations, together with hair salons and nail parlours.

All these have now been closed for a week as authorities hope to contain the virus spread so schools can reopen on January 11 after a two-month hiatus.

Priests are allowed to conduct Epiphany church services, but without admitting worshippers.

Monday’s Holy Synod statement said the government should stick to the Christmas relaxation, which had followed negotiations with the Church, arguing that clerics had faithfully observed all agreed pandemic containment measures over the holidays.

The Church’s moderate leader, Archbishop Ieronymos, who himself contracted and recovered from Covid-19, has backed the country’s ongoing vaccination drive.

But a conservative bishop made headlines shortly after Christmas by railing against the vaccines, telling parishioners he had been informed that they included material harvested from aborted foetuses.

Monday’s Holy Synod statement urged the European Union leadership, and the Greek government, to ensure that “the necessary number of approved vaccines is immediately secured for citizens”.

Scotland to return to lockdown as Johnson ponders school closures