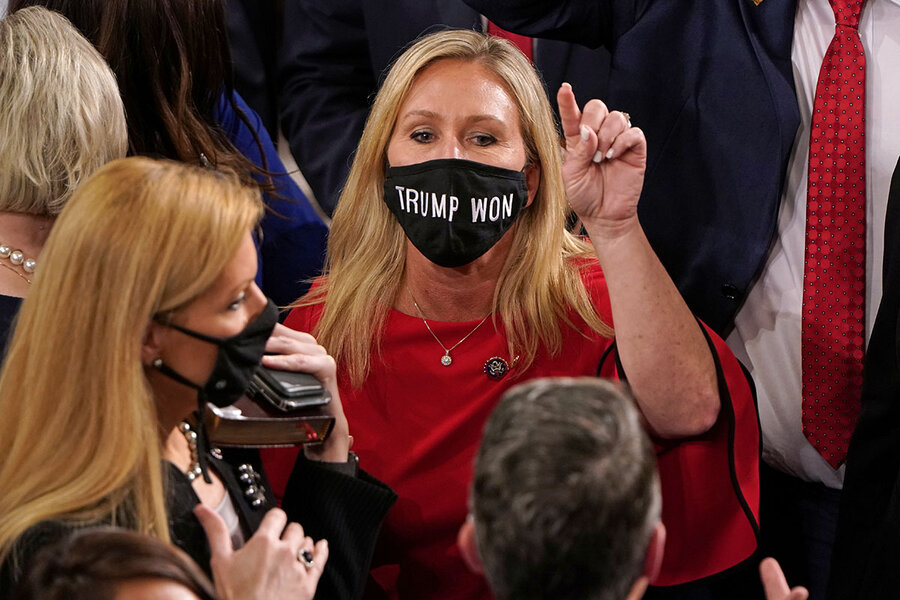 “This is an assault on democracy, an ill-considered assault,” he says.

In the short run, it is the outcome of Tuesday’s Georgia runoff elections that is extremely important, as it will determine which party controls the Senate for the first years of Mr. Biden’s term.

If Democrats win both, Senate seats would be split 50-50. But in the event of a tie, Vice President Kamala Harris could then tip the chamber to her party. Though narrow, this margin could have a tremendous influence on how a President Biden thinks about his initial legislative agenda.

President Trump has harshly criticized Secretary of State Raffensperger and Gov. Brian Kemp, both Republicans, for saying that Georgia’s November vote was secure and accurate. (The vote was subject to two recounts, one by hand, that affirmed Mr. Biden’s victory.) The president remains highly popular among Georgia Republicans, and Mr. Perdue and Ms. Loeffler could suffer if his words backfire or depress the GOP vote.

If they lose, President Trump will likely say they did not kiss his ring enough, says Chuck Bullock, chair of political science at the University of Georgia.

“The base lives and dies on what Trump says, and so do these two candidates. He’s the blood in their veins. So they cannot, dare not, separate themselves,” says Professor Bullock.

But sticking with Mr. Trump has its risks for candidates to statewide office. The president’s hourlong call with Mr. Raffensperger, in which he pushed for the Georgia state official to “find” 11,780 votes to defeat Mr. Biden, and vaguely threatened him with legal consequences if he didn’t, was an extraordinary display of false claims and conspiracy theories that directly contradicted what state and federal authorities have said about the election. It may have been illegal, according to some experts.

“Donald Trump committed a crime,” says Keith Gaddie, a professor of political science at the University of Oklahoma.

Others say that prosecuting a case for solicitation of vote fraud would be very difficult, given the circumstances and need to prove the president’s state of mind, and thus many prosecutors might give it a pass.

In any case, it was clear that President Trump and the Georgians on the other end of the phone call live in completely different worlds. President Trump described allegations of voter fraud popular in conservative media. These include claims that at least one specific official manipulated votes for Mr. Biden, that Biden ballots were counted multiple times, and that crooked voting machines were snatched up and moved out of state. Mr. Raffensperger and state counsel Ryan Germany patiently explained that those allegations had been found to be untrue.

At one point, President Trump pressed Mr. Germany as to whether Dominion had in fact moved its machinery out of Fulton County, the most populous in the state. Mr. Germany replied it had not, nor had it moved parts of machines.

“Are you sure, Ryan?” said President Trump.

But given the vehemence with which President Trump repeated the allegations during the call, some of them multiple times over, it seemed clear he truly believes them. Theories that hold the president has been simply lying about the vote in order to harm Mr. Biden or develop a following for post-White House endeavors now seem unlikely, says Professor Keyssar.

That is so despite the fact that some of the allegations, particularly those involving Dominion voting machinery, are bizarre to the point of irrationality. In that sense, the phone call with Mr. Raffensperger was analogous to the phone call with Ukrainian President Volodymyr Zelenskiy for which President Trump was impeached. In the latter call, the president pressed his Ukrainian counterpart about whether Ukraine had in its possession a hacked Democratic server supposedly smuggled into the country.

“It’s divorced from reality, but it’s lined up with prejudices and acrimonies that are a big part of their reality,” says Professor Keyssar of the Dominion allegations.

Split in the GOP

It is unclear how many of the GOP members of the House and Senate who are lined up to support President Trump on Jan. 6 share this commitment to the truth of the voter fraud allegations. Many rank-and-file Republican voters do, though: A December Quinnipiac poll found that 77% of Republicans believe there was widespread fraud in Mr. Biden’s victory.

This belief bubbling up from the bottom may help drive a split in the party between Trump followers such as Senators Cruz and Hawley and establishment players such as Senate Majority Leader Mitch McConnell – or, as President Trump has called them, the “surrender caucus.”

GOP lawmakers caught in the middle of this fight face tough choices, says Professor Bullock. Vote against Mr. Trump, and get a primary challenge from the right. Vote with him, and get accused of extremism by a Democratic opponent.

“It puts the marginal Republican in a very uncomfortable position,” says Professor Bullock.

The promise of legislative fireworks on Jan. 6 is itself evidence of how much of a split has already developed in the party. Majority Leader McConnell asked his caucus to refrain from challenging the election results, to no avail.

“The problem with the Republican Party in the U.S. is there seems to be no boundary on how far right one can go anymore, to the point of simply rejecting democracy,” says Professor Gaddie.

McConnell stares down the barrel of Trump’s gun

What to look for in Georgia’s runoff election