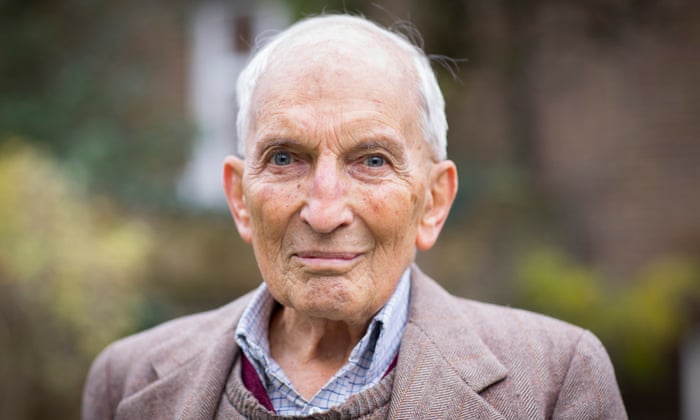 When Martin Kenyon went to receive his first coronavirus vaccination, his pithy responses after being accosted by a TV crew outside Guy’s hospital in London secured him “national treasure” status.

He’d had trouble parking, and had consumed a “nasty lunch” before getting the jab after cold-calling Guy’s and asking for it, he told the CNN crew who fortuitously bumped into him immediately afterwards. And he was hoping, he said, that he was “not going to have the bloody bug now”.

Now Kenyon, a sprightly 91-year-old, who found internet fame after his interview went viral, is one of the few who have received their second jab.

“I went back to Guy’s, and, well, it’s become quite a machine there,” said Kenyon, an Old Etonian and Oxford man who was very active in the anti-apartheid movement, and was friends with Desmond Tutu, and personally met Martin Luther King Jr and Nelson Mandela.

“When I went to get the first one, I was the only person there, I think. There was one man there, with a pencil and some paper and writing down a few names. This time it was very different. Very efficient.”

Kenyon, who says the immunity from the vaccine means he can now hug his “enchanting” two grandchildren, said second-time round he had no trouble parking his “super little car”, which he is “allowed to drive everywhere around London, because I have a badge, which is brilliant”.

“This time, I was able to park absolutely outside the main building in a special slot. So, all was well. It was very painless.”

“Now, I don’t have to think about it again. It’s all done. I am going to survive, and I’m looking at lovely pictures of my two delightful daughters and my two enchanting grandchildren [aged seven and 10]. They are very nice children, and they love their grandfather,” he said.

Kenyon’s recent fame saw him widely interviewed, including by Piers Morgan, causing further merriment when he asked ITV’s Good Morning co-host: “Who are you?”

“I didn’t intend to be rude,” he says now. “I think when he was interviewing me I had bits of cotton wool in my ears, and the interview came from somewhere else that I couldn’t see. So, when I said ‘Who are you?’ I think I meant who’s talking, because I couldn’t see the interviewer.”

Despite his vaccination, Kenyon intends to continue wearing a mask. “I was given a rather fancy one for my birthday by my daughter,” he said.

“In a few days I will be immune. I don’t think I’ll pass anything on to anybody else. I think all will be well. And my family are very pleased.

“I suppose it means I can do all sorts of things now. I can behave badly, now. I do most of the time, but generally in secret,” he joked. “I am, of course being very frivolous. But it’s new year, and I think we’ve got to cheer it up a bit.”