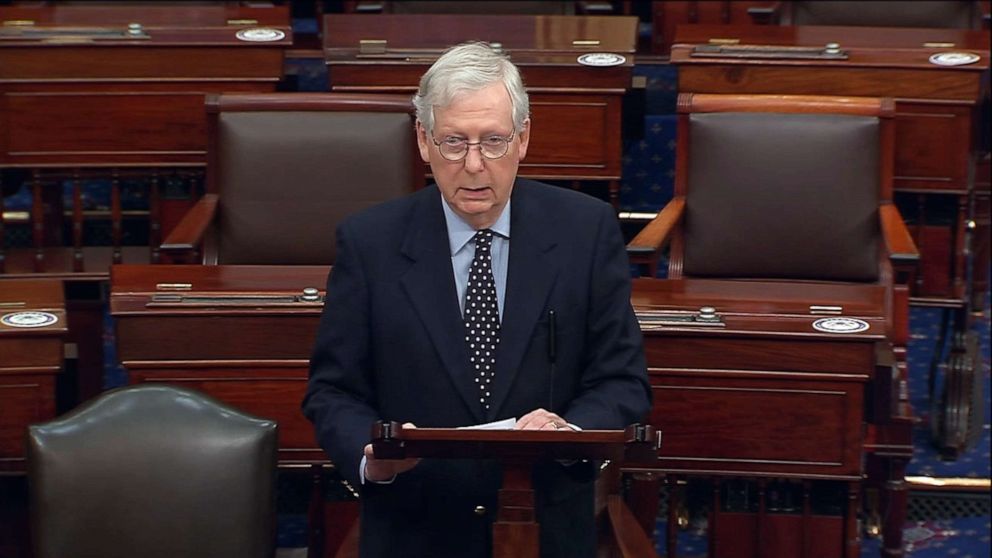 Senate Majority Leader Mitch McConnell blocked two separate attempts from Democratic senators to pass a bill that would boost relief payments from $600 up to $2,000, which the House narrowly passed late Monday night with Republican support.

McConnell, speaking on the Senate floor Tuesday, instead indicated the Senate would work on responding to the concerns raised by President Donald Trump when he signed the $900 billion pandemic relief and government funding bill Sunday.

McConnell said the Senate “will begin a process” to bring three priorities to the table this week, which includes increasing stimulus payments to $2,000, examining a repeal of Section 230, and considering election-integrity measures — all demands Trump has made in recent days.

“Those are the three important subjects the president has linked together. This week, the Senate will begin a process to bring these three priorities into focus,” McConnell said.

After McConnell spoke, Trump once again tweeted a warning, saying, “Unless Republicans have a death wish, and it is also the right thing to do, they must approve the $2000 payments ASAP.”

It’s unclear at this point how McConnell plans to proceed, but if he does intend to tie those three issues Trump wanted addressed together into one bill, it’s unlikely to pass.

“If we start adding poison pills to the $2,000 payment bill, that is just another way of telling the American people that this body doesn’t support $2,000 payments,” Sen. Chris Murphy, D-Conn., said on the floor.

Senate Minority Leader Chuck Schumer on Tuesday called for unanimous consent to boost the direct payments to $2,000 per qualifying American but McConnell objected and the request was blocked.

Just after Schumer spoke, Sen. Bernie Sanders, I-Vt., also asked for unanimous consent that after the Senate vote to override the defense policy veto, which is expected to happen Wednesday, it take up and pass the $2,000 stimulus checks bill.

McConnell also objected to that. Sanders then objected to the NDAA override vote taking place Wednesday, which could keep the Senate in longer than leadership intended.

In a major rebuke to the outgoing president, the House on Monday overwhelmingly voted to override Trump’s veto of the must-pass sweeping defense policy bill known as the NDAA.

The final vote was 322-87, receiving the two-thirds majority it required. 109 Republicans voted to override the president. Twenty Democrats voted to sustain the president’s veto.

If the Senate also overrides the president’s veto, it will be the first time Congress has successfully rejected a presidential veto during Trump’s presidency.

“Let me be clear: If Senator McConnell doesn’t agree to an up or down vote to provide the working people of our country a $2,000 direct payment, Congress will not be going home for New Year’s Eve,” Sanders said in a statement late Monday. “Let’s do our job.”

Later Tuesday, Sanders told reporters he wasn’t sure what McConnell planned to do.

“I think Leader McConnell is going to tell us what’s going to happen but I would say that at a time when two-thirds of the House voted to provide those $2,000 checks. The overwhelming majority of Americans want that, Trump wants it, Biden wants it, Pelosi wants it, Schumer wants it. Let’s have a vote, and let’s pass this damn thing,” Sanders said.

As of Tuesday, at least five Republican senators have said they outright support the measure that would boost those $600 stimulus checks to $2,000.

Loeffler and Perdue are facing tough reelection battles in Georgia next week – the fate of their races will determine which party controls the Senate next year.

“Absolutely, we need to get relief to Americans now, and I will support that,” Loeffler said on Fox News Tuesday.

Perdue, meanwhile, tweeted he backs “this push for $2,000 in direct relief for the American people.”

“For working families and frontline workers I think this would be very helpful,” GOP Sen. Susan Collins of Maine said Tuesday, though she cautioned she has concerns about checks going to individuals who aren’t necessarily in need.

“I am concerned the way it is structured it would also benefit upper-income individuals because it does not phase out as quickly as the $600 check,” Collins said. “I don’t know whether it’s possible put a cap on it or make some changes or whether this is going to be an all or nothing vote.”

GOP Sen. Deb Fischer echoed Collins, and said she agrees with the relief payments but isn’t on board with the payment structure.

“People are hurting and I think we need to get more aid. I’m upset it’s not targeted. I’m upset that the process is always throwing in things together, I’m upset we continue to not have bills in time to really study them,” Fischer told reporters Tuesday.

Asked if she’d support a bill that includes the stimulus checks, and other elements that McConnell touched on, including a repeal of Section 230 and election integrity measures, Fischer expressed concern.

“I don’t like everything rolled in together. I think you end up with bad policy. And I realized that in many cases, you have to throw a lot of stuff in to get the votes but we need to we need to assume the responsibilities, and really start to prioritize what the needs are of the people of this country,” the Nebraskan senator said.

If McConnell were to put a standalone measure – such as the House bill – on the floor it would need at least 60 votes initially to start the procedural process. With every Democrat on board, and at least 7 Republicans saying they could support it, only a handful of Republicans would need to sign off.

But McConnell’s hesitancy to put this measure on the floor could be due to his concerns over the growing national debt.

The Joint Committee on Taxation estimated that the $2,000 relief payments could cost as much as $464 billion dollars, which is more than half of what the entire COVID-19 relief package cost, at $900 billion.

The current COVID-19 relief measure that includes $600 checks came at a total cost of about $160 billion.

Senate Republicans have for months stressed over increased government spending and are likely to oppose adding more to the national debt, so it’s unclear if enough Republicans in the Senate would support $2,000 stimulus checks.

Late Monday, the House narrowly passed a bill that would increase the amount of money Americans receive in a second round of pandemic relief stimulus payments to $2,000 up from $600.

The final vote tally was 275-134, receiving the two-thirds majority it required under the expedited vote. Forty-four Republicans voted with Democrats.

Even though Trump supports the measure, a number of Republicans voted against the bill.

The House vote came one day after Trump signed the $2.3 trillion spending and COVID-19 relief bill, which included $600 stimulus checks for Americans who make $75,000 or less.

Trump initially threatened to hold up the bill last week and said it was a “disgrace.” He spent the next several days calling on Congress to pass a bill that included $2,000 stimulus checks instead.

Despite all the political back-and-forth, late Tuesday afternoon Treasury Secretary Steven Mnuchin tweeted that paper checks would begin to be sent out Wednesday, including a link where Americans can check on the status of their relief payments.

Telangana nod for Ayushman Bharat; to be dovetailed to Aarogyasri