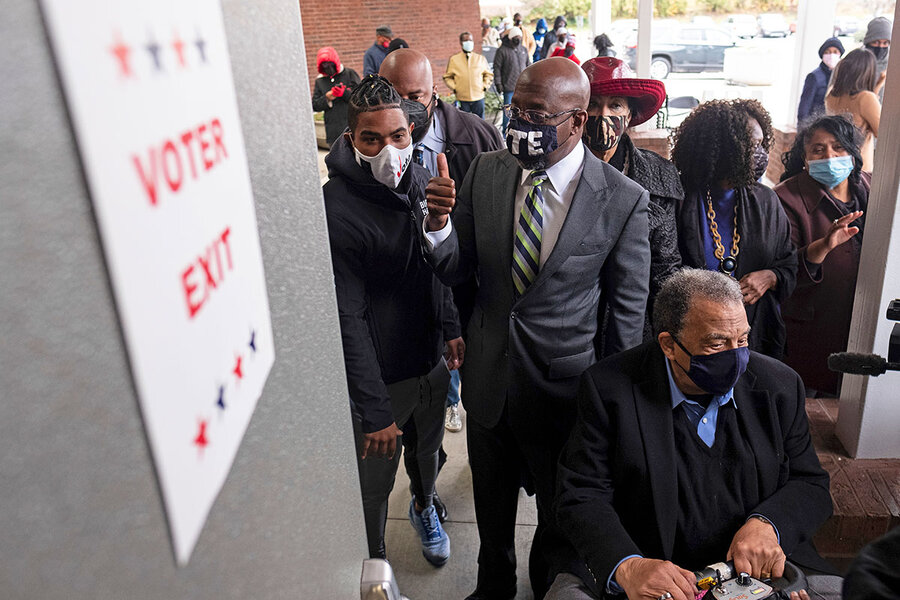 Andrew Young looks at the long line of mostly Black voters that wraps around the C.T. Martin Natatorium and Recreation Center on a dark, cold, and wet morning on the first day of early voting for Georgia’s Senate runoff elections, and his eyes brim with tears.

“People died for this right,” says the former Atlanta mayor, congressman, United Nations ambassador, and civil rights activist. “I knew many of them.”

He recalls the first voter registration drive he worked on ahead of the 1956 elections, when the Ku Klux Klan rallied nearby. A friend to the late Georgia Rep. John Lewis and Martin Luther King Jr., Mr. Young helped organize the 1960s civil rights demonstrations in Birmingham and Selma, Alabama, and he was with Dr. King in Memphis when he was assassinated in 1968. Mr. Young’s life has been dedicated to making a line like this happen.

“If Lewis were here, he’d be tearing up with me,” Mr. Young tells the Monitor. “They’d be tears of joy.”

Years of work by activists like Mr. Young – and more recently, former gubernatorial candidate Stacey Abrams – have arguably brought Georgia to this moment. In November, the state narrowly went for Joe Biden, the first Democratic presidential candidate to win here since 1992. Now, the outcome of Tuesday’s two runoffs – between Republican Sen. David Perdue and documentary filmmaker Jon Ossoff, and between Republican Sen. Kelly Loeffler and the Rev. Raphael Warnock – will determine which party controls the U.S. Senate.

When early voting ended last Friday, a record-breaking 3 million ballots had been cast, with turnout in Democratic-leaning areas surpassing that in rural, conservative districts. That’s not surprising, since Democratic voters are more likely to vote early, but the party can point to another encouraging data point: Black voters made up a larger share of early voters than they did in November’s election.

Still, many here say that the fight to expand voting access is far from over. Fair Fight, the organization Ms. Abrams founded in the wake of her 2018 loss, has taken aim at what it calls modern forms of voter suppression, such as purging registration lists and unnecessarily long lines at polling stations. Activists also cite gerrymandering, photo ID requirements, and signature match laws as efforts to discourage minority turnout.

Significantly, according to the secretary of state’s website, Georgia has become the first state in the country to implement the “trifecta” of automatic voter registration, at least 16 days of early voting, and no-excuse absentee. But local Republicans are now trying to roll back some of these measures, with Secretary of State Brad Raffensperger calling for the elimination of no-excuse absentee ballots late last month, something that the state Senate Republican Caucus has also called for, along with banning ballot drop boxes, and requiring photo identification for absentee voting.

On the docket to be considered by the U.S. Senate if Georgia’s two Democratic candidates win is the John R. Lewis Voting Rights Act – a piece of legislation aimed at restoring the original Voting Rights Act, which was largely stripped of its teeth in a 2013 Supreme Court ruling.

“This is a defining moment in American history,” says Mr. Warnock, after voting for himself in Atlanta alongside Mr. Young. “And Georgia is at the center of it.”

High stakes for the U.S. Senate

If elected, Mr. Warnock, who has served since 2005 as the pastor at Ebenezer Baptist Church, where Dr. King preached, would become the first Black Democratic senator from the South.

Currently, the Senate stands at 50 Republicans and 48 Democrats, with both parties seeing Georgia’s two seats as must wins. The four candidates have raised more than $340 million combined, with the majority of funds coming from outside Georgia. A slew of big names have come to campaign in the state, including both President Donald Trump and President-elect Biden on Monday.

Despite Mr. Biden’s recent victory in Georgia, the incumbent Republican senators are largely considered the front-runners. Republicans have held the governorship and both legislative chambers since 2005, and they’ve long been successful in Senate runoff races. In November, both Republicans earned more votes than their Democratic opponents, with Senator Perdue earning more votes statewide than President Trump. Under Georgia state law, if no candidate breaks 50%, then the top two, regardless of party, advance to a runoff.

But the Democratic candidates have reasons to be hopeful. Mr. Warnock and Mr. Ossoff outraised their Republican opponents in the final two months of the race, with Mr. Ossoff becoming the best-funded Senate candidate in history.

If Democrats are successful on Tuesday, it may be because of previously disengaged voters like Angela Embry. Ms. Embry had never voted in a midterm or special election, and she didn’t vote in November’s presidential election. But after hearing so much talk about the importance of the Senate runoffs, Ms. Embry lined up in Atlanta on the first day of early voting to cast a ballot for Mr. Ossoff and Mr. Warnock.

“I just didn’t use to think about voting,” she says.

Runoff elections rarely achieve the same level of turnout as presidential races, notes Andrea Young, executive director of the American Civil Liberties Union of Georgia and the daughter of Andrew Young. But like so many things over the past year, she adds, this runoff election could be different.

“It’s always a challenge to get people back out to vote,” says Ms. Young. “There’s a big gap between the super voters – the people who show up every time there’s an election, who tend to be older, who tend to be whiter – and the younger voters, who tend to be much more diverse.”

Exit data suggests that Mr. Biden was able to flip Georgia blue because of strong support from suburban voters around the Atlanta area, where he added 188,000 votes to Hillary Clinton’s 2016 totals. This included Black suburbanites, who constitute between 30% and 58% of the population in six suburban counties.

But higher turnout among Black voters doesn’t mean suppression is no longer an issue, says Ms. Young. “It means that people worked really hard to overcome it,” she says.

Concerns in Georgia date back to 1860s

Race and politics have been intertwined in Georgia since at least the Reconstruction era, when the first 33 Black members of the Georgia General Assembly – and some of the first in the country – were elected in 1868. Later that same year, they were removed from office because of their race, and at least one-quarter of them were killed, beaten, or jailed. Today, a statue honoring the “Original 33” stands outside the state capitol in Atlanta.

For almost a century, until President Lyndon Johnson signed the Voting Rights Act of 1965, Black voters in several states – and particularly Georgia – were subject to various hurdles intended to depress turnout, such as literacy tests or poll taxes.

Even Georgia’s runoff rule has racist origins. In the early 1960s, Denmark Groover, a segregationist and state representative from Macon, who had previously blamed an election loss on “Negro bloc voting,” led a campaign in the legislature to enact a runoff rule statewide to hinder the political power of Black and non-segregationist candidates.

Many today echo this same history as their reason for making sure they cast a ballot.

Pheolian Evans III, a retired paper mill employee born and raised in Augusta, remembers having to read the Constitution at the local polling location when he was 18 in order to vote. He says he’ll vote for Mr. Warnock and Mr. Ossoff on Election Day.

More than 80% of Black registered voters nationwide identify as Democrats, and over the past two decades, the Black electorate has participated in elections at a rate that surpasses other nonwhite voting blocs. Black voters represent almost one-third of Georgia’s electorate, the fourth highest share among all the states and District of Columbia.

In 2018, Ms. Abrams, who was previously the Georgia House minority leader and the first Black female gubernatorial nominee to run in any state, lost to Republican Brian Kemp by fewer than 55,000 votes. She accused Mr. Kemp, who oversaw the election as Georgia’s then-secretary of state, of voter suppression – including removing nearly 700,000 voters from voter rolls and placing 53,000 voters, 70% of whom were Black, in registration limbo due to the state’s exact-match policy one month before the election.

While she acknowledged Governor Kemp as the victor in a press conference 10 days after the election, she never officially conceded.

Through her activism, Ms. Abrams has become a central figure in politics, vilified on the right and cheered on the left. Shortly after the 2020 presidential race was called for Mr. Biden, the crowd of cheering voters outside the White House repeatedly chanted “Sta-cey Ab-rams,” rather than the name of the president-elect.

“There’s no question,” Mr. Warnock tells the Monitor after a drive-up rally outside a church in Augusta. “[Voting rights] are being imperiled right now by those politicians who somehow feel that rather than the people picking their politicians, the politicians ought to be able to pick their people. And so they engage in all kinds of tricks, the machinations of voter suppression.”

Mary Smith, a retired social service investigator leaning against the hood of her car at Mr. Warnock’s rally, remembers the fear her mother would have going to the polls on Election Day growing up in rural South Carolina during the civil rights era.

While she may not worry about physical violence or threats as her mother did, Ms. Smith says Black Americans still face hurdles when it comes to voting. Some of her family and friends can’t afford the transportation costs to get to their polling station on Election Day, she says, and the mass incarceration of Black men takes a sizable chunk of eligible voters permanently out of the electorate.

“To get out of poverty, we’re told to participate in the education system and vote for a ticket to a better life,” says Ms. Smith. “And it feels like people want to take that away.”

Samuel Little, deemed the nation’s ‘most prolific serial killer’ by the FBI, has died