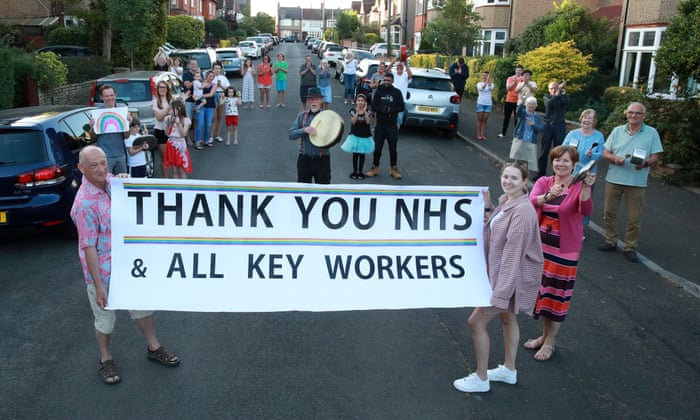 The originator of the weekly “clap for carers”, honouring NHS and other healthcare staff for their efforts during the coronavirus pandemic, has announced it is to resume on Thursday.

The original clap started as the UK went into its first lockdown in March last year and ran for 10 weeks, taking place every Thursday at 8pm.

Millions of people stopped what they were doing each week to applaud NHS staff, carers and other health workers, sometimes playing instruments or bashing pots and pans.

Annemarie Plas, a Dutch national living in south London, who started the clap for carers, announced an end to the ritual in May because of concerns it was becoming politicised.

The prime minister and other MPs had joined in the applause, while at the same time facing criticism over the lack of personal protective equipment for healthcare workers, pay levels, and the government’s decision, later reversed, to continue charging overseas health and care staff for using the NHS.

On Wednesday, Plas tweeted that she was relaunching the weekly clap. She wrote: “We are bringing back the 8pm applause in our third lockdown. I hope it can lift the spirit of all of us.”

We are bringing back the 8pm applause, in our 3rd lockdown I hope it can lift the spirit, of all of us. Carers teacher, homeschooling parents, those who shield and ALL who is pushing through this difficult time! Please join & share!#clapforheroes pic.twitter.com/Tl27BlzqlH

However, she was bombarded with negative responses, suggesting there could be much less support for the gesture this time round.

One Twitter user, James Oswald, wrote: “This may be well intentioned, but it’s absolutely the wrong thing to do. You want to reward all the heroes? Lobby hard for pay rises, bonuses across the NHS, living wages. That’s how you applaud the heroes, not with some vacuous hand clapping.”

Concerns were also raised that it could lead to people flouting lockdown rules. During the weekly ritual last year, crowds of Londoners were filmed on Westminster Bridge. The scenes led to Downing Street stepping in to urge people to adhere to social distancing while applauding.

Another Twitter user, James Piggford, wrote in response to Plas’s tweet: “Let’s not, it’s an empty gesture. Let’s support the heroes by staying at home and beating this awful disease.”

The royal family and celebrities joined in the original claps, leading to further accusations of virtue signalling.