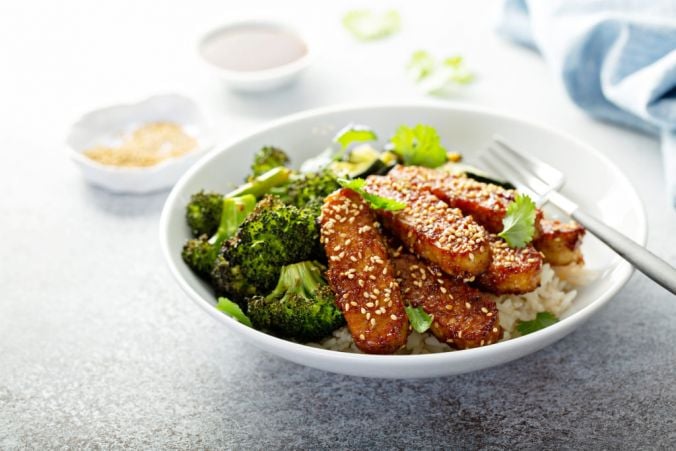 Recipe ideas for Veganuary: Teriyaki tempeh with rice and vegetables

This year’s Veganuary is set to be the biggest yet, with thousands of people already signed up to go plant-based for 31 days.

Whatever your motivations for ditching meat – maybe it’s for your health or the environment – cutting animal products from your diet can be a tricky task at first.

To make sure you last the whole of January – and even beyond – you’ll need to be prepared in the kitchen, with vegan meat alternatives on hand. While substitutes won’t be exactly the same as tucking into a steak or beef burger, many have similar textures to meat and can be cooked in the same way.

Looking to spice up your Veganuary? Try these meat replacements…

When cooked with no love or attention, tofu can be a bit grey and tasteless. But do it right and there’s a reason why it’s one of the most popular sources of protein for veggies and vegans.

Made out of bean curd, tofu is incredibly versatile. It can provide a crispy pop of deliciousness atop stir fries; after freezing it becomes the perfect ‘meaty’ base for a bolognese; or kept soft, it’s silky and flavourful when stirred through stews and curries.

Made from wheat gluten, seitan has the closest texture to meat of anything on this list, so is often used in burgers, fried ‘chicken’ and fake bacon. While seitan on its own doesn’t have huge amounts of flavour (nor does it look wildly appealing), it’s all about how you season it and what you put it with.

You can make your own seitan – for example, using this recipe from Yup… It’s Vegan! – or buy it ready-made.

Originating from Indonesia, tempeh is similar to tofu but with a nuttier taste. Made from fermented soybeans, it’s also firmer in texture, meaning it can be easily sliced and then fried or baked.

When cooking with tempeh, it’s worth marinating it beforehand to amp up the flavour, then use to top salads, stir fries or curries.

January is a time for hearty meals like chillies, cottage pies and ragus, and if you’re doing Veganuary, you don’t have to miss out on these warming dishes entirely. Instead, experiment with replacing your regular beef mince with soya.

Soya mince is widely available at most supermarkets. You don’t have to learn any new dishes or fancy cooking techniques for this one – it tends to come ready cooked, meaning you can chuck it in a pan with all your usual flavours and sauces, and you’ll have dinner on the table in no time.

When slow cooked and laden with spices, jackfruit tenderises into something similar in texture to pulled pork. Whole jackfruit are hard to come by, so look out for it tinned.

We particularly like slow cooking jackfruit in beer for tacos, or dousing it in hoisin sauce and five-spice powder for Chinese ‘duck’ pancakes. While delicious, jackfruit isn’t a great source of protein, so you’ll want to make sure you’re getting enough of that in your meals as well – perhaps by adding beans or chickpeas.

One in four Irish adults expected to participate in Dry January

Couple use lockdown to make over stately home in Co Down

Greta Thunberg at 18: I’m not telling anyone else what to do