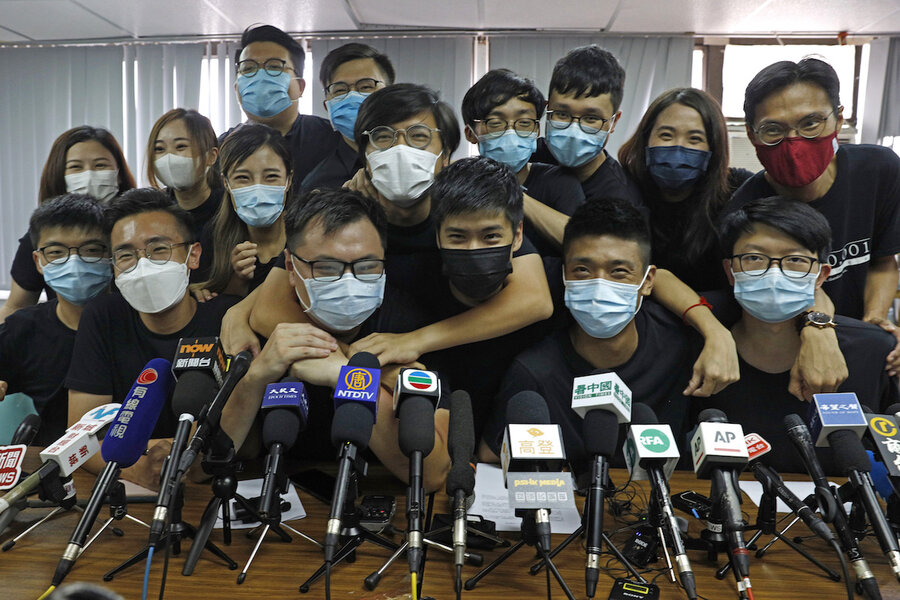 The mass arrests were the largest move against Hong Kong’s democracy movement since the law was imposed by Beijing last June to quell dissent in the semi-autonomous territory.

“The operation today targets the active elements who are suspected to be involved in the crime of overthrowing, or interfering [in] … the Hong Kong government’s legal execution of duties,” Hong Kong’s security minister, John Lee, said at a news conference.

He said those arrested were suspected of trying to paralyze the government by attempting to gain a majority in the legislature to create a situation in which the chief executive had to resign and the government would stop functioning.

A video on former lawmaker Lam Cheuk-ting’s Facebook page showed police arriving at his home and telling him he was “suspected of violating the national security law, subverting state power.” Police told those recording the video to stop or risk arrest.

The legislative election that would have followed the unofficial primaries was postponed by a year by Hong Kong Chief Executive Carrie Lam, who cited the public health risks during the coronavirus pandemic. Mass resignations and disqualifications of pro-democracy lawmakers have left the legislature largely a pro-Beijing body.

Mr. Lee said the police would not target those who voted in the unofficial primaries, which were held in July and attracted more than 600,000 voters even though pro-Beijing lawmakers and politicians had warned the event could breach the security law.

All of the pro-democracy candidates in the unofficial primaries were arrested, apart from a few who had fled the territory, according to reports by the South China Morning Post, online platform Now News, and political groups.

At least seven members of Hong Kong’s Democratic Party – the city’s largest opposition party – were arrested, including former party chairman Wu Chi-wai. Former lawmakers Mr. Lam, Helena Wong, and James To were also arrested, according to a post on the party’s Facebook page.

Benny Tai, a key figure in Hong Kong’s 2014 Occupy Central protests and a former law professor, was also arrested, reports said. Mr. Tai was one of the main organizers of the primaries.

The home of Joshua Wong, a prominent pro-democracy activist who is serving a 13 1/2-month prison sentence for organizing and participating in an unauthorized protest last year, was also raided, according to a tweet posted from Mr. Wong’s account.

American human rights lawyer John Clancey was also among those taken into custody. Mr. Clancey was the treasurer of political group Power for Democracy, which was involved in the unofficial primaries.

“We need to work for democracy and human rights in Hong Kong,” Mr. Clancey said as he was being led away by police, in a video posted by local online news outlet Citizen News.

Police also went to the offices of Stand News and Apple Daily, two prominent pro-democracy news outlets, with a court order to hand over documents to assist in an investigation related to the national security law, according to the two media outlets. Another online news outlet, In-Media, received a similar court order. No arrests were made.

Mr. Lee pointed to a “10 steps to mutual destruction” plan that included taking control of the legislature, mobilizing protests to paralyze society, and calling for international sanctions.

That plan was previously outlined by former law professor Mr. Tai. He predicted that between 2020 and 2022, there would be 10 steps to mutual destruction, including the pro-democracy bloc winning a majority in the legislature, intensifying protests, the forced resignation of Ms. Lam due to the budget bill being rejected twice, and international sanctions on the Chinese Communist Party.

“The plot is to create such mutual destruction that if successful … will result in serious damage to society as a whole,” said Mr. Lee. “That is why police action today is necessary.”

Senior Supt. Steve Li of the national security unit said the operation involved 1,000 officers. The 45 men and eight women arrested are aged between 23 and 79, according to a police statement.

All were in police custody except for one man who was granted bail so he could self quarantine, according to the statement. He is expected to report to the police later this month.

Six were arrested for subverting state power by organizing the unofficial primaries, while the rest were arrested for allegedly participating in the event, Mr. Li said. He said more arrests could be made and investigations were ongoing.

Alan Leong, chairman of the pro-democracy Civic Party in Hong Kong, said at a news conference Wednesday that plans to exercise voting rights to veto the budget and eventually oblige the chief executive to step down are rights enshrined in the Basic Law, Hong Kong’s mini-constitution.

The arrests were an “affront to the constitutionally protected rights to vote” in Hong Kong, Mr. Leong said.

Hua Chunying, a spokesperson for China’s Ministry of Foreign Affairs, said Beijing supports Hong Kong police in their carrying out of “their duties in accordance with the law.”

“The rights and freedom Hong Kong people enjoyed have not been affected in any way,” Ms. Hua said at a daily news briefing. “What was affected was that some external forces and individual people in Hong Kong colluded with each other in an attempt to undermine the stability and security of China.”

The security law criminalizes acts of subversion, secession, terrorism, and collusion with foreign powers to intervene in the city’s affairs. Serious offenders could face up a maximum punishment of life imprisonment.

Ms. Lam had said at the time of the unofficial primaries last year that if their aim was resisting every policy initiative by the Hong Kong government, the election may fall under subverting state power, an offense under the national security law.

Beijing had also called the primaries illegal and a “serious provocation” of Hong Kong’s electoral system.

Following the handover of Hong Kong to China by the British in 1997, the city has operated on a “one country, two systems” framework that affords it freedoms not found on the mainland. In recent years, Beijing has asserted more control over the city, drawing criticism that it was breaking its promise of Hong Kong maintaining separate civil rights and political systems for 50 years from the handover.

The sweeping arrests drew condemnation from Anthony Blinken, the U.S. Secretary of State nominee for the upcoming Biden administration, who said on Twitter that it was an “assault on those bravely advocating for universal rights.”

“The Biden-Harris administration will stand with the people of Hong Kong and against Beijing’s crackdown on democracy,” Mr. Blinken wrote in his tweet.

In Germany, Foreign Ministry spokeswoman Maria Adebahr said the arrests “confirm our fears … that the national security law would lead to an erosion of the freedoms, rights and rule of law guaranteed to Hong Kongers in the Basic Law.”

The arrests send the “signal that political pluralism is no longer tolerated in Hong Kong,” EU spokesman Peter Stano told a press conference. The security law is being used “to crush dissent and stifle the exercise of human rights and political freedoms.”

“Hong Kong is looking more like mainland China but where one ends and the other begins is hard to discern,” she said.

A year after COVID appeared in China, normalcy makes a comeback