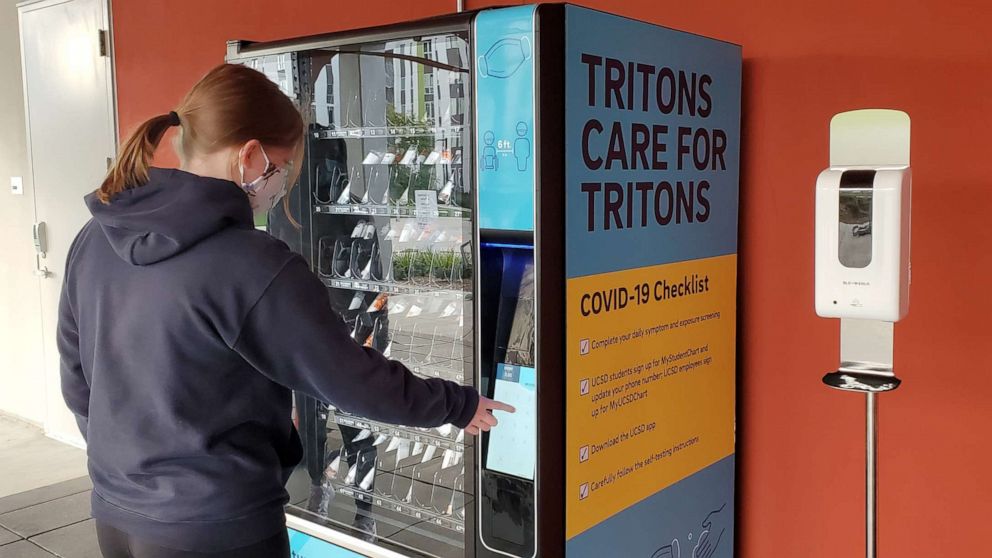 Lengthy waits for COVID-19 tests are a thing of the past at the University of California, San Diego now that the school is distributing test kits — for free — from on-campus vending machines.

Schools officials attributed the success in mitigating the spread of the virus over the fall quarter to normalizing proven methods, such as enforcing mask-wearing, social distancing and frequent testing, Pradeep Khosla, UCSD’s chancellor, told ABC News. Only 581 students, and just 183 among the approximately 10,000 who live on campus, have tested positive since March 1.

But as the university prepared for a nationwide surge over the holidays, school officials said they wanted to come up with an idea to make testing more widely available, Khosla said.

“The way to think about this is, we are removing the friction associated with testing,” Khosla added.

While an appointment with a nurse previously was required to get tested, the new program was in place by Saturday — right when students returned from the holiday break. Dr. Angela Scioscia, head of student health and well-being at UCSD, told ABC News that the take-home kits are then returned to a dropbox, and results are uploaded to a student’s portal, sometimes that same day.

“They can pick up the kit at their convenience — they can drop it off,” Scioscia said. It’s “much more user-friendly.”

A few hundred kits were distributed on Saturday, more than 1,000 were on Sunday and more than 2,000 were on Monday, Scioscia said.

Freshman Andy Goodman told ABC San Diego station KGTV that while he was “uncomfortable” with the new process at first, “after doing it a bunch of times, I got used to it.”

Sophomore Citlaly Magana told KGTV her last test was “like my 20th time since I’ve been here. I’m not lying. We get tested every week.”

Tests are required for students as they return to campus for the spring semester — the first within 24 hours of arrival, then five and 10 days later, Scioscia explained. After the 10-day tests, students who live on campus are required to get tested weekly or face disciplinary action.

The school has incentivized students to remain diligent about testing — if someone gets tested 10 straight weeks, they receive a $50 donation in their name to the basic needs hub on campus, Khosla said.

Why GOP is splitting over Electoral College results