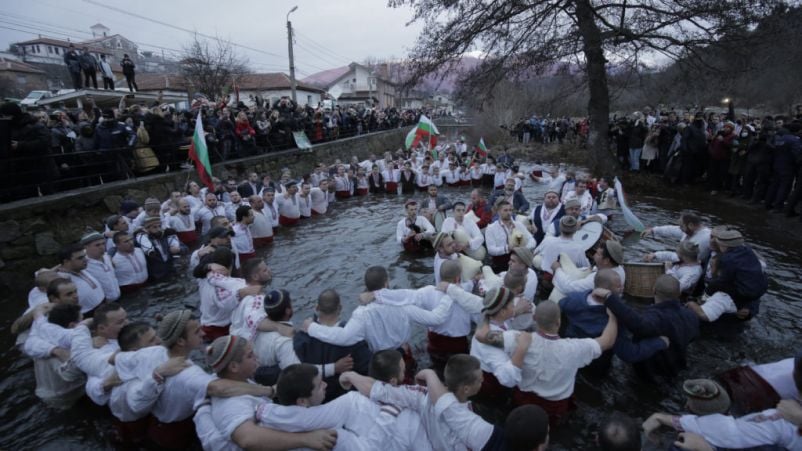 Thousands of Orthodox Christian worshippers in Bulgaria have ignored warnings to abstain from mass gatherings due to the coronavirus pandemic and taken part in centuries-old Epiphany traditions.

Young men plunged into the icy waters of rivers and lakes across Bulgaria to retrieve crucifixes tossed by priests in ceremonies commemorating the baptism of Jesus Christ.

The legend goes that the person who retrieves the wooden cross will be freed from evil spirits and will be healthy throughout the year.

After the cross is fished out, the priest sprinkles believers with water using a bunch of basil.

Inspired by bass drums and bagpipes and fortified by homemade liquor, they performed a slow “mazhko horo”, or men’s dance, stomping on the rocky riverbed.

The mayor of Kalofer, who usually leads the dance, this year did not enter the river to set an example that coronavirus regulations have to be followed.

A few local police officers attempted to prevent people from entering the river, threatening them with fines, but their calls were widely ignored.

Epiphany marks the end of the 12 days of Christmas but not all Orthodox Christian churches celebrate it on the same day.

While the Orthodox Christian churches in Greece, Bulgaria and Romania celebrate the feast on January 6, Orthodox Churches in Russia, Ukraine and Serbia follow the Julian calendar, according to which Epiphany is celebrated on January 19, as their Christmas falls on January 7.

Some Western Christian churches celebrate the religious holiday of Epiphany as the Three Kings Day, which marks the visit of the Magi, or three wise men, to the baby Jesus, and closes out the Christmas season.