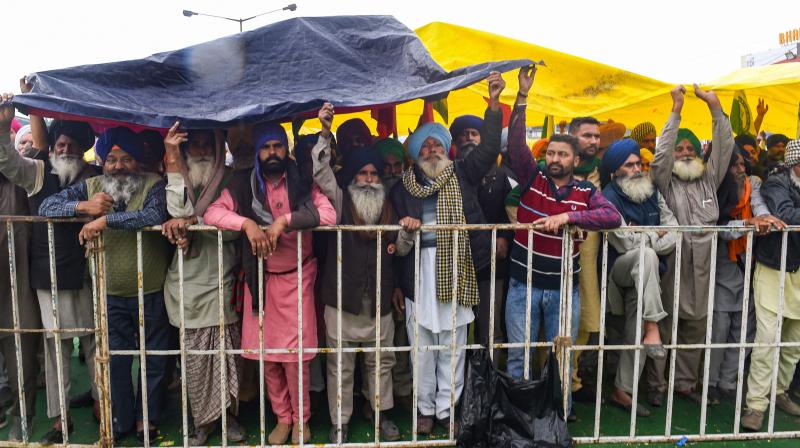 NEW DELHI: The seventh round of talks between the representatives of protesting unions at Delhi borders and the Central ministers failed to end the impasse on Monday as the government ruled out a roll-back of the three contentious agricultural laws and the farmers' leaders refused to call off their agitation till that happens. The next round of discussions to resolve the deadlock over laws enacted in September last year will be held on January 8.

The government, represented by Union ministers Narendra Singh Tomar, Piyush Goyal and Som Prakash, told a delegation of 41 union leaders that it would review any clause the protesters had a problem with. During the meeting, the government also listed various benefits from the three laws, but farmers kept insisting that the legislation must be withdrawn to address their apprehension that the new Acts would weaken the Minimum Support Price (MSP) and mandi systems and leave them at the mercy of big corporates.

“The agriculture minister clearly said that the laws will not be repealed, he even told us to approach the Supreme Court for repeal of the laws," said Sarwan Singh Pandher of the Kisan Mazdoor Sangharsh Committee, who attended Monday's meeting. “We urge the youth of Punjab to prepare for a long haul. We will take out a big procession on Republic Day,” he added. The farmers have threatened to hold a rally on January 26 if their demand for repeal of the three laws and a legal guarantee on the MSP are not met.

“The agriculture minister wanted us to discuss the laws point-wise. We rejected it and said that there is no point in discussing the laws because we want a complete rollback of the laws,” said Yudhvir Singh, Bhartiya Kisan Union (BKU).

BKU’s Rakesh Tikait said that farmers’ unions will hold a meeting on Tuesday to decide their future course of action. “Kanoon wapasi nahi, to ghar wapasi nahi (We will not go home until the laws are withdrawn)," he added.

After the meeting, Mr Tomar said the government is sensitive to farmers' concerns and offered clause-wise discussion on the three Acts but they could not reach a conclusion. "The meeting was held in a good atmosphere but farmers were adamant on their demands and we could not arrive at any conclusion. The next meeting has been decided with due consensus," he said in response to allegations by farmers' leaders that they do not trust the government.

"Several rounds of talks are held during such important issues. The government has to decide keeping in mind farmers of the entire country. Both sides want to resolve the issue. The laws have been made keeping in mind the best interest of farmers,” he added.

Before the meeting at Delhi’s Vigyan Bhavan began, both parties observed a two-minute silence as a mark of respect to the 50 protesting farmers who have died during the agitation till now.

The two sides took a long break after about one hour of discussions, during which union leaders had their own food, arranged from langar (community kitchen), as they have been doing for the last few times. Unlike the last round of talks on December 30, the Central ministers did not join the leaders for the langar food and were seen having their own discussion separately during the break, which lasted for almost two hours.

Monday's was the first meeting this year as the sixth round of discussion was held on December 30 when both the sides reached a consensus on two issues — the rise in power tariff and penalties for stubble burning. The meeting, which lasted for over five hours, had, however, failed to break the deadlock over the repeal of three agriculture legislations and a legal guarantee for MSP.

The Tom Cotton gambit to win the Republican future

Which GOP members of Congress plan on challenging the Electoral College results?

Telangana Congress in a fix over PCC chief appointment