Greetings, Homemade products !
Today we will cast a brass razor handle without using casting machines, literally on our knees, simultaneously combining this business with the very basics of forging , and try to forge a knife from the spring.
The author of the YouTube channel “Bonn Factory” sometimes pleases us with rather complex products, which are not easy to repeat without preparation. And sometimes, as in fact this time, home-made in the format of the very beginners, everything will be very simple, and all the processes can even be repeated in garage conditions. You saw the end result on the cover, now let's take a step-by-step process of creating this unique razor from the spring.
First of all, cut a small piece from the spring.
As you can see, it has uneven thickness and bending along its entire length. Further, for the convenience of further work, we will weld a piece of reinforcement to the resulting workpiece. It will replace the pliers that the author does not have.
Next, you need a forge.
Of course, the forge is not the best because of the high heat loss, but we work with what we have. In forging, there are no rules like “the heavier the hammer, the better.” For the most part, the weight of the working hammer depends on the strength of the blacksmith, that is, it is quite normal to use hammers weighing 800 and 500 grams.
Lack of experience and running out of propane in the burner played a role. The master was in a hurry because of the end of the gas and constantly forged an unheated workpiece, plus in some places it was not clear how to hit in order to get the desired shape. But in the end, as for the first time, everything turned out quite well.
Now you can cut off the previously welded reinforcement, after which we proceed to roughing the blade.
In the end, it worked out pretty well. The thickness is uniform and the shape is exactly what it was originally intended. We continue to work. Let's start manufacturing the handle.
First, you need to decide on the dimensions of the future handle. Then we outline the blade on paper and come up with the shape of the pen.
We will use the method of obtaining wax plates by pouring molten wax into a foil mold. Here it is important to keep the printed pattern of the crumpled foil on the wax, so it is necessary to come up with a way to painlessly separate the wax blank from the foil. At first, the author decided to use a special separator composition in the form of a spray, but after experimenting with the first form, it became clear that in fact this spray does not really help with separation. Therefore, we make another form and this time we cover it with talcum powder. But the result remained the same. This is the case when stability is not in our favor. In general, it was necessary to continue looking for a way, and the third option was the option with applying liquid soap on the foil.
We wrinkle the foil a little, melt the wax and pour it into the resulting shape.
When pouring molten wax, the soap began to boil, which made the entire workpiece porous. Let's see how all this will be separated.
In general, it was possible to separate the foil from the third attempt. We also managed to get a relatively flat plate with a very interesting pattern that somewhat resembles leather.
The front part turned out without bubbles, which cannot be said about the back. But despite this, it was decided to continue working with the blank. The next step is to put the wax plate under the press for a while, so that it evens out and finally cools down under pressure.
To further offer the work, it is necessary to warm up the wax a little and make it more flexible so that it does not split under the action of the cutter at an unnecessary moment. In this case, it is enough to hold the plate between your palms. Then we select the place on the plate that is most even in thickness and cut out the wax halves of the handle.
Then equalize the thickness, scraping off excess wax with a scalpel.
Also, when leveling the thickness of the workpiece, it was possible to clean almost the entire surface of most of the bubbles, which could not but rejoice. We will simply melt the largest remaining pores with a soldering iron so that air does not cling to them during molding and does not create additional problems in processing.
Next, you need to try on the blade in the handle and, making sure that everything goes according to plan, we solder the plates.
Now the most interesting thing is to start making the gating system. Since not everyone has foundries in their garages, so we will pour it by gravity. For a good result, the gating system must be very powerful so that the metal spills freely over the entire length of the casting. But thick sprues are far from being a guarantee of success. In addition, we need vapors so that gases are freely removed from the mold and do not create gas locks, thereby preventing pouring. It is also extremely important that the vapors do not merge into one, since they are very thin and the metal in them can solidify at any time, thereby blocking the air movement for the channels located below. 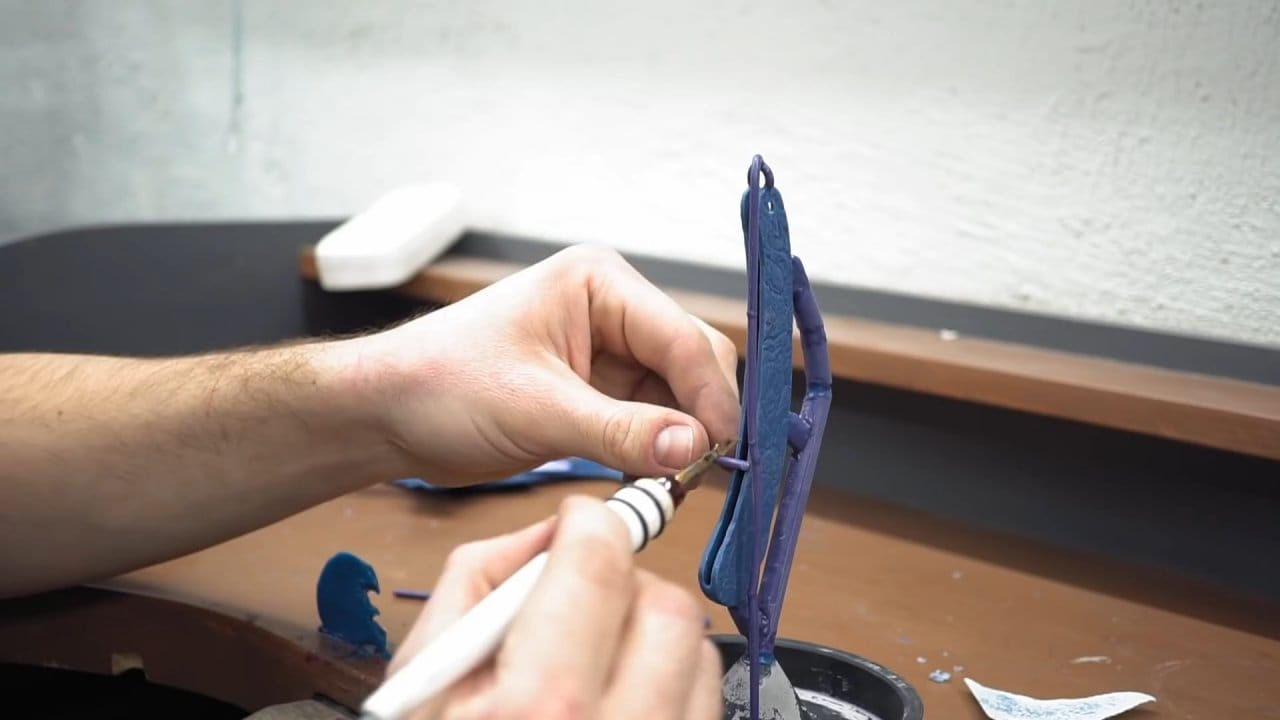 Of course, this will all affect the size of the structure, but such is the price of primitive casting. There is either a rich gating system, or a rich pocket for the purchase of casting machines. The next step is to weigh the resulting structure and go to calculate the metal.
According to the results of calculations, in the end we need 208g of brass, which will fit, for example, brass plumbing.
Next, knead the gypsum and pour it into the flask. After that, the form must be tapped a little to help the lost air bubbles come to the surface. You need to act quickly and confidently to leave the flask alone until the plaster has set.
After 40 minutes, the plaster was finally set. Now it is necessary to remove the excess gypsum from the investment ring and start calcining it. In this case, you still can't do without a muffle furnace, even the simplest one.
Since the master ran out of propane at the initial stage, so it was decided to melt the metal in a smelter, but brass can be easily smelted even in a fire over coals, or in common smelters buckets.
It's time to pour. And pouring, as mentioned earlier, will be by gravity.
Now it only remains to free the casting from the plaster. We are waiting for about 5 minutes, when the glow of the metal from the temperature is almost over and we dip the flask in water. Gypsum is very readily destroyed from thermal shock and thereby frees the casting.
As you can see, the casting was successful. And most surprisingly, there were practically no bubbles on the surface. Most of the bubbles suffered from vapor, which is not at all important for us. The handle itself spilled more than perfectly.
Moving on. Using a grinder, we cut off thick sprues.
To give an old look to the freshly cast blank, we will use the usual pharmacy sulfuric ointment. Apply it in a thin layer to the surface and heat the handle. There will be a lot of smoke, so make sure you have good ventilation beforehand.
The handle is ready, and it looks quite decent.
It's time to harden the blade. From information from the Internet, it follows that spring steel is hardened at temperatures of about 830 degrees with quenching in oil and subsequent tempering at a temperature of 250 degrees. This is exactly what we will do.
Now we apply a drawing with a construction felt-tip pen.
Next, throw a couple of pieces of iron chloride into warm water and immerse the blade in the resulting solution for half an hour.
That's all. Thank you for attention. Until next time!
Author's video:

Folding table made of wood

Bookcase made of wood and metal