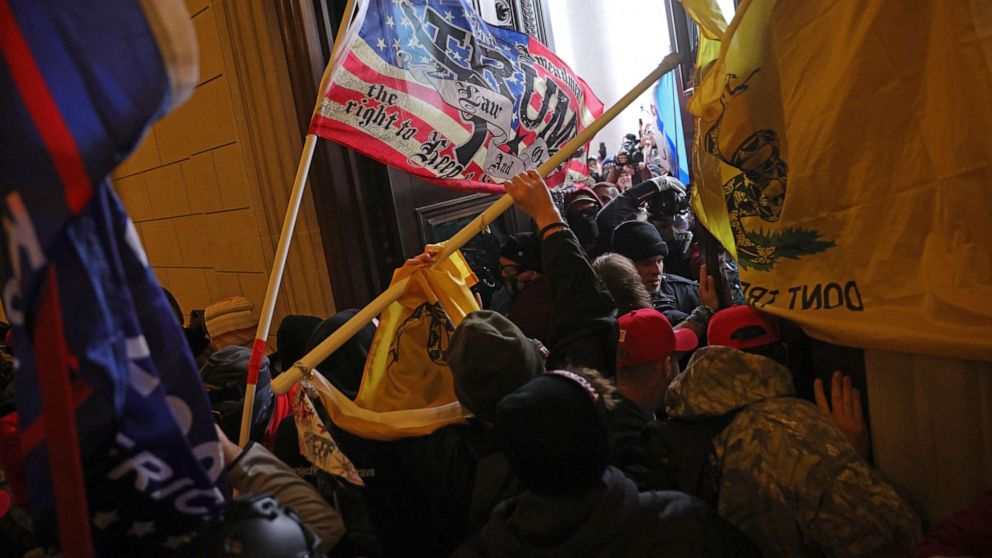 Political leaders demanded late Wednesday to know why law enforcement did not better fortify the United States Capitol after extremist groups for days chattered online about their plans to react violently to the final formal step of certifying President Donald Trump’s 2020 election defeat.

Ken Cuccinelli, the Department of Homeland Security’s acting deputy secretary, told ABC News he was “quite surprised” to watch on television an instance in which the doors of the Capitol were breached with no obvious police resistance — even as U.S. Capitol Police officers with shields withstood the force of a mob armed with pepper spray at other locations.

“All of us in law enforcement have been planning for this for a number of days,” Cuccinelli said. “This is all going to get analyzed. It really is going to have to be looked at.”

U.S. Capitol Police, which is the lead agency in protecting the hallowed structure, could not be reached for comment.

The potential for a mob of President Trump’s supporters to launch an assault on the Capitol was not explicitly laid out by extremist groups. But there were red flags and warning signs widely circulating on social media and flagged to law enforcement in the run-up to Wednesday’s unprecedented breach, internal bulletins and intelligence reports obtained by ABC News show.

Intelligence reports widely circulated among federal law enforcement agencies included scores of social media posts condoning unruly actions similar to those that unfolded Wednesday. A Dec. 29 report by the online extremism watchdog group SITE quoted a right-wing activist saying, “I really don’t care if people break into Congress and drag these politicians out in the streets.”

In one video cited in the report, agitators “encouraged each other to attend the event armed and prepare for violence,” the report said.

The report concluded that extremist far-right and conspiratorial groups would use the Jan. 6 pro-Trump protest to act on online threats.

“Based on the fairly straightforward intelligence that thousands of angry people were going to come and show their presence — including groups prone to violence — law enforcement was totally ill-prepared to handle today’s incident,” said ABC News contributor Brad Garrett, a former FBI special agent. “This was a phenomenal law enforcement failure.”

Federal and local law enforcement were openly talking about security concerns they harbored in the days leading up to Wednesday’s “Stop the Steal” rally in Washington. One federal official briefed on the situation told ABC News that concerns about violence were not a secret. The official said it’s not clear why more action was not taken with so much advance notice.

Mary McCord, a Georgetown Law professor and former federal prosecutor, said federal agencies that protect the nation’s most sacred and hallowed offices had gathered ample information ahead of the assault on the Capitol.

“I don’t know why the Capitol Police were so unprepared,” McCord said.

Her alarm at the ease with which the protest mob moved across the National Mall, over modest fortifications, and into the Capitol, was shared by members of Congress. Committee on House Administration Chairperson Zoe Lofgren, a California Democrat, said the breach “raises grave security concerns.”

“I intend to have the Committee on House Administration work with the bipartisan House and Senate leadership to address these concerns and review the response in coming days,” she said.

“I have always felt safe at the Capitol,” Bass said. “It would have never dawned on me that this is the place where I needed to be afraid.”

Jeh Johnson, who served as Secretary of Homeland Security under President Barack Obama, said he believes “there could have been adequate security in place to prevent this from happening.”

Not only was Wednesday’s breach predictable, said ABC News contributor Garrett, but in a city so accustomed to mass gatherings, it should have been a routine law enforcement exercise to fortify against it.

“This should have been a classic anti-riot operation for a law enforcement agency, where a perimeter is set up in advance, crowds are channeled away from their target location, and reinforcements are called in from the National Guard or other federal agencies,” Garrett said. “I just can’t imagine that the Capitol Police didn’t go through that drill.”

Former U.S. Capitol Police Chief Kim Dine told ABC News that, more than anything, the day’s events were “so tragic on so many levels, it literally is hard to describe.”

Dine said the breach was no doubt “the worst nightmare” for a department dedicated to “protecting that place, those people, the democratic process. … There’s no question about it, there’s a whole lot of work to be done.”

For Democrats, the Cheneys are unlikely heroes

US to modify H1B visa selection process, to give priority to wages, skill level

Check Also
Close
Live COVID-19 statistics for
World
Confirmed
88,021,991
Recovered
49,082,780
Deaths
1,898,347
Popular Posts
Facebook Twitter WhatsApp Telegram Viber
Back to top button
Close
Popular Posts
Most Commented
x
More Information
We and our partners use technology such as cookies on our site to personalise content and ads, provide social media features, and analyse our traffic. Click below to consent to the use of this technology across the web. You can change your mind and change your consent choices at anytime by returning to this site. Read more
I accept
Cookies Settings
Cookie Box Settings
Cookie Box Settings