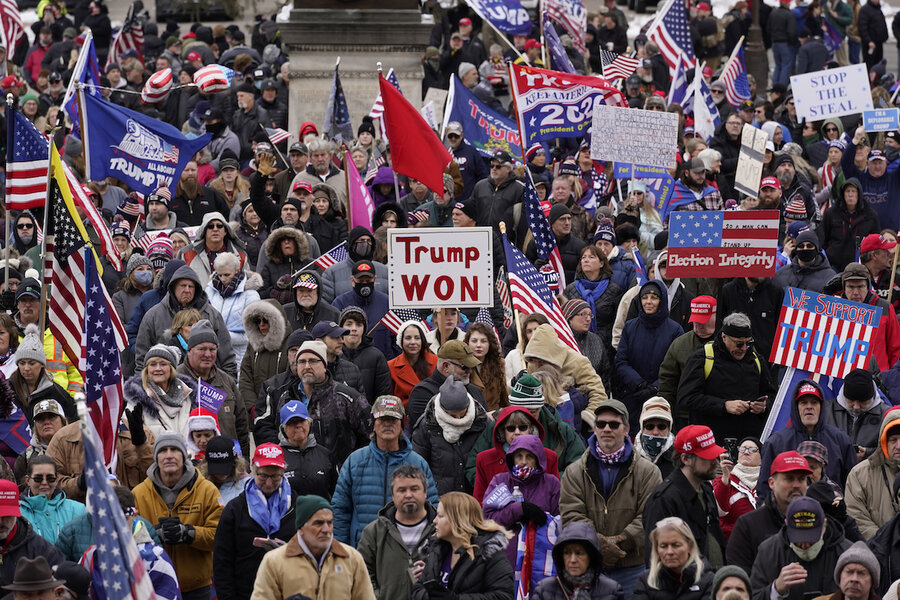 As supporters of President Donald Trump stormed the United States Capitol Wednesday – upending the certification of President-elect Joe Biden’s Electoral College win and forcing members of Congress to shelter in place – more protests were taking place across the country.

About 200 supporters of President Donald Trump rallied Wednesday at the Kansas Statehouse to show their support for overturning President-elect Joe Biden’s victory.

Mr. Trump’s supporters listened to speeches promoting Trump’s baseless claims about election fraud and suggesting that the COVID-19 pandemic has been exaggerated.

They chanted “stop the steal,” “four more years,” and “no more masks,” a reference to many Mr. Trump supporters’ opposition to coronavirus restrictions such as requiring people to wear masks in public.

Close to 1,000 supporters of Mr. Trump gathered Wednesday at the Oklahoma Capitol. Holding “Trump 2020” flags and signs that read “Stop the Steal,” the protesters gathered on the Capitol’s south steps.

In Utah, about 200 people in Salt Lake City crowded around a television monitor on the steps of the Capitol to watch the president give a speech in Washington promoting his baseless claims of election fraud.

Colton Fiedler said he was the first person to arrive at the statehouse at just before 9 a.m. in the hopes that the nation’s representatives in Congress would “finally find the courage to do the right thing.”

In St. Paul, hundreds of supporters Mr. Trump gathered at the Minnesota Capitol.

The Star Tribune of Minneapolis reports the demonstration was heavy on speeches and chants in opposition to both the outcome of the presidential election and the emergency measures implemented in Minnesota to stop the spread of COVID-19. Few people in the crowd of up to 500 wore masks as Congress began the process of certifying Mr. Biden’s win.

There were loud cheers when the crowd learned that protesters in Washington had breached the U.S. Capitol complex. And there were boos for Vice President Mike Pence, who has defied Mr. Trump by saying he doesn’t have the authority to reject the electoral votes that make Mr. Biden president.

“This is not dissent, this is disorder,” Mr. Biden said addressing the overrun of the Capitol in D.C. “It’s not a protest, it’s insurrection.”