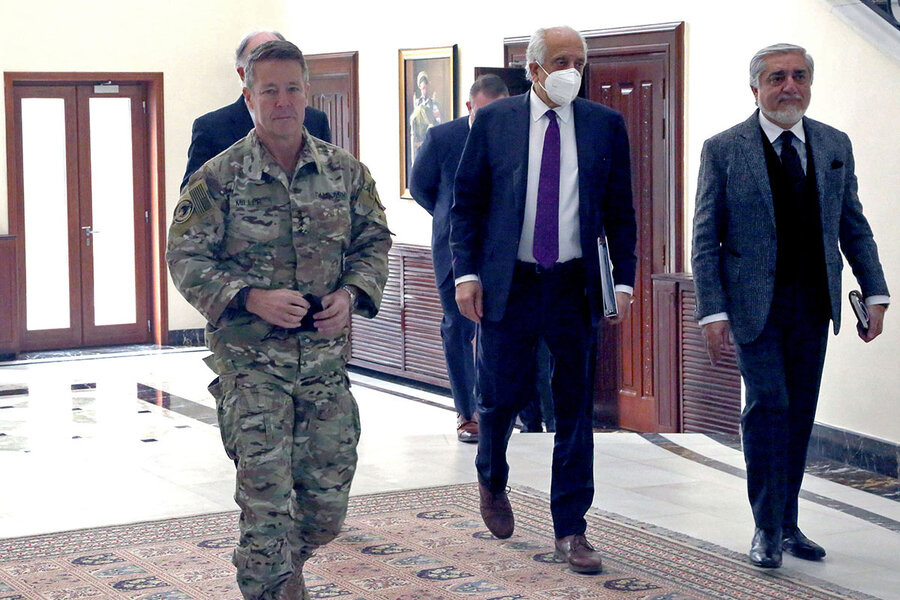 As America’s longest war reaches the two-decade mark this year, one of President-elect Joe Biden’s first orders of business will be figuring out a way forward in Afghanistan – and, by extension, a roadmap for NATO’s mission in the country.

Neither the Taliban nor Al Qaeda is at the top of America’s national security threat list anymore, and NATO officials, too, have been clear about their belief that they have bigger fish to fry. In the alliance’s new Strategy 2030 report, Afghanistan is mentioned just six times in 40 densely-packed pages.

The war in Afghanistan is a mission on which the success or failure of NATO was once thought to hinge. In its early days, the war was billed as not only a post-Cold War rebirth of the alliance, but also its 21st-century evolution.

No longer. The new security agenda, according to the report, will be dominated by “competing great powers, in which assertive authoritarian states with revisionist foreign policy agendas” – in other words, China and Russia – “seek to expand their power and influence.”

Yet as NATO prepares for the next decade, its challenges will be tackled by an alliance transformed, for better or worse, by its experience in Afghanistan and the lessons it has learned there. The question, analysts say, will be whether it chooses to heed them.

“Habits of cooperation and interoperability”

Afghanistan became NATO’s marquee mission with the U.S. invasion in 2001, the first time in history that the alliance invoked Article V, which declares that an attack on one is an attack on all. The NATO-led International Security Assistance Force (ISAF) was ultimately composed of allies from 50-plus countries, including non-NATO partners.

In the early years of the war, the running joke among U.S. forces, however, was that ISAF stood for “I saw Americans fight,” or “I sunbathed at FOBs” (forward operating bases, which are heavily fortified and largely safe). The underlying critique was that some allied governments used restrictions called “caveats” to prevent their troops from carrying out night missions, for example, or from deploying to certain more violent parts of the country – and, as a result, U.S. and other fighting forces carried a heavier load.

Still, the cooperation was a growth experience for the alliance, says Ian Lesser, executive director of the German Marshall Fund in Brussels. “These caveats did in some ways hinder the ISAF’s ability to operate, but it operated nonetheless, and learned a lot by that in terms of habits of cooperation and interoperability that were tested everyday.”

At the same time, the experience transformed the militaries of many NATO member nations. In Germany, some 90,000 troops have deployed to Afghanistan over the years. “There’s no German general today who doesn’t have military or even fighting experience there,” says Markus Kaim, senior fellow at the German Institute for International and Security Affairs in Berlin. The same goes, too, for a generation of soldiers in Italy, Spain, the Netherlands, and Canada.

Member forces grew accustomed to collaborating on intelligence sharing and mission planning that made use of some high-tech systems that many nations wouldn’t have been exposed to in peacetime, says Anthony Cordesman, defense analyst at the Center for Strategic and International Studies. This in turn, led to a “much better appreciation for allied capabilities.”

And it led to an even greater appreciation for allies themselves – including non-NATO partners, many of whom, like Australia and South Korea, took part in the Afghanistan war.

“If we think about any military engagement of NATO going forward, we’ll conceptualize it not as 30 member countries of NATO, but as a loose platform” that includes other organizations and non-NATO partners as well, Dr. Kaim says. “NATO needs partners,” he says, because “NATO is aware that it can’t shy away from deep political changes we’re seeing.”

The NATO 2030 report emphasizes making the bloc a “more political alliance,” which means making it a “place where core security concerns of all sorts are discussed,” Dr. Lesser says. The Asia-Pacific region, especially China, is a case in point. “It’s a recognition that the definition of what bears on Euro-Atlantic security has expanded tremendously.”

“The right thing to do for NATO”

This focus on great power competition, coupled with the varying levels of disenchantment with missions that don’t end cleanly, means that the appetite for launching military operations again anytime soon will differ across the alliance.

It starts with the question of whether NATO members consider Afghanistan a success. “Was it worth all the effort, the blood? Most people would likely answer ‘not really,’” Dr. Kaim says. Militarily, an alliance with impressive weapons uprooted Al Qaeda but did not defeat the Taliban, which, though an effective guerrilla force, was never a highly sophisticated threat. On the nation-building front, “You spent an incredible amount of money to achieve remarkably little,” Dr. Cordesman says.

Yet the definition of success itself reflects the different strategic cultures within NATO. While America is deeply uncomfortable with the notion of not winning, for many NATO allies, analysts say, it was enough to show solidarity, to be present, and to make a contribution.

More broadly, Afghanistan was seen as “the price to pay, and the right thing to do for NATO in return for the reassurance those countries get from the alliance on the bigger existential threats they face,” Dr. Lesser says. “The fact that they’ve been present in Afghanistan is simply part of the insurance policy, and you have to pay these premiums over time.”

And even as most members came out of their Afghan experience “more cautious about exporting democracy,” the 2030 report acknowledges, it also argues that it’s nonetheless “vital” that NATO doesn’t allow democratic “erosion.”

The causes and costs of corruption

For this to happen, NATO must take some key lessons of Afghanistan, including the corrosive effects of corruption – and the ways in which the U.S. and its NATO allies may inadvertently encourage it, says retired Col. John Agoglia, former director of both the U.S. Army’s Peacekeeping and Stability Operations Institute and the Counterinsurgency Training Center-Afghanistan, both in Kabul.

The billions of free-flowing Western dollars that flooded into Afghanistan after the invasion made graft and fraud easy and commonplace. “We need to understand how we put money into an environment – who we’re giving it to, what are the oversight mechanisms? What could be the second and third order impacts?”

Corruption “undermined the legitimacy of the Afghan government, reduced its effectiveness, and created a source of resentment for its own population,” which in turn drove Taliban recruitment and made it “much more difficult” for NATO to achieve its key mission goals, “from security to effective governance,” Karolina MacLachlan, policy officer at Transparency International in London, wrote in NATO Review.

At the same time, in bolstering some former Soviet republics to help resist Russian democratic undercutting and influence, as in Afghanistan, “we may have to deal with some people who have blood on their hands, some who are corrupt, some who are trying to reform,” Colonel Agoglia says. “We’ve learned a lot about understanding the limits of power, how to shape it as best you can, and how to take what you can get – and it’s not always going to look pretty.”

“I get the great power competition, but it’s won and lost in the trenches doing these things – so that if you actually do have to go into combat,” he adds, “you own the day.”