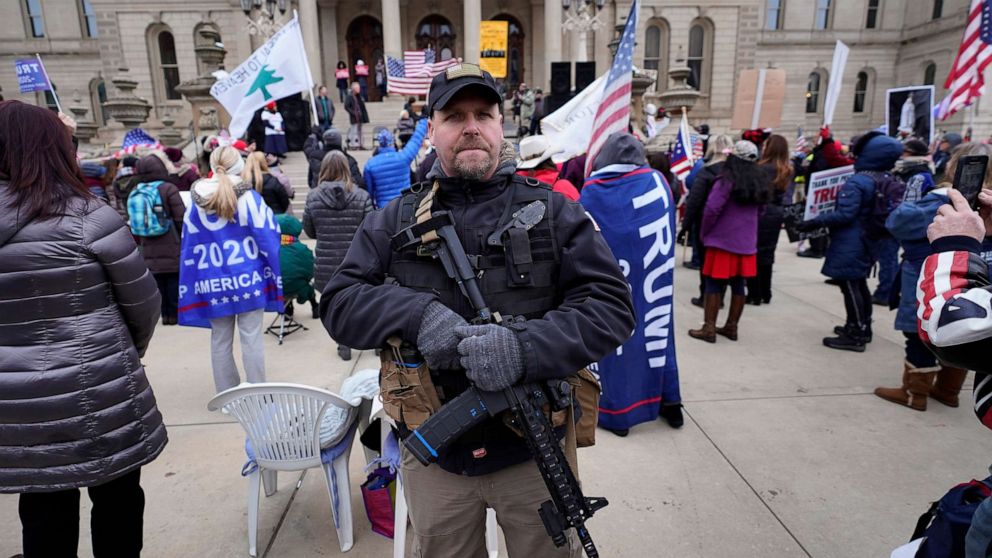 As rioters stormed Capitol Hill in Washington, D.C., protesters in support of President Donald Trump — mostly unmasked — convened in cities across the U.S.

“The LAPD’s Metropolitan Division was at the scene but did not engage in any crowd management or crowd control,” police said.

An unlawful assembly was declared and six people were arrested: three for carrying unpermitted items while attending a public demonstration, two for failing to disperse and one for resisting/obstructing an officer.

The state patrol responded to the first call of a breach and officers dispersed the crowd, Wright said.

“They did not make access to the entrance itself, just to the grounds,” Wright said, adding that the protest was peaceful.

No arrests were made, he said.

The state patrol is investigating how the breach occurred, he said.

Washington Gov. Jay Inslee said in a video message that he was safe.

Altercations erupted at the Oregon Capitol in Salem “despite repeated attempts to keep opposing groups from converging toward violence,” Salem police said.

“No force was necessary to separate the two groups,” police added.

The Oregon State Police, who declared the event an unlawful assembly, said one person was arrested for harassment and disorderly conduct.

About 400 Trump supporters came together at the Utah Capitol in Salt Lake City, The Salt Lake Tribune reported.

The Salt Lake Tribune reported that one of its photographers was pepper-sprayed and verbally harassed while covering the protest.

Utah Gov. Spencer Cox tweeted in response, “This is disgusting. We will work with Capitol security to ensure the perpetrator(s) are held accountable and prosecuted to the fullest extent of the law.”

About 700 to 800 people came to the lawn of Michigan’s Capitol in Lansing, some bringing rifles and “Stop the steal” signs, The Detroit Free Press reported.

One woman held a sign that said, “ELECTION #’S AS PHONY AS COVID #’S”.

No one tried to get inside the building, the Free Press said, and the state police called the crowd “cooperative.”

About 100 protesters, some armed with long guns, came to Georgia’s Capitol in Atlanta, The Associated Press reported.

Georgia Secretary of State Brad Raffensperger and his staff evacuated their offices as the protesters assembled outside.

Hundreds of Trump supporters united outside Colorado’s Capitol in Denver for a peaceful rally, The Denver Post reported.

Some wore helmets, knee pads and gloves with hardened knuckles, while others held signs that said “Media is the virus,” the Post reported.

Denver Mayor Michael Hancock said he instructed city municipal buildings to close early “out of an abundance of caution.”

Some protesters laughed when they learned about the mob sieging the U.S. Capitol in D.C., the newspaper said.

“We are going to fight, we are going to go down, there’s going to be casualties,” said local Republican Party leader Alley Waterbury, according to the Tribune. “I’ll be the first casualty, I do not care.”

“This is 1776 … the time for talk is over,” one man told the Tribune. “Be on the right side of history because we are about to make it.”

About 1,000 Trump supporters converged at Arizona’s Capitol in Phoenix for a 10-hour-long protest, The Arizona Republic reported.

A few Trump supporters banged on state Capitol building’s doors, shouting “Freedom!” and yelling for the governor, the newspaper reported.

Some protesters brought a wooden guillotine with a Trump flag on it, the Republic reported.