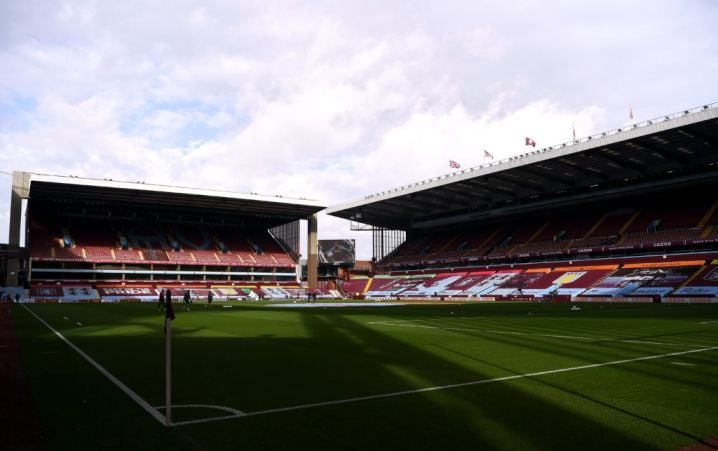 Villa are due to host Liverpool in the FA Cup on Friday, © PA Wire/PA Images

Aston Villa’s FA Cup clash with Liverpool remains in doubt with a decision on whether the match can go ahead to be made on Friday morning after a coronavirus outbreak at the midlands club.

The third-round tie scheduled is to take place on Friday evening at Villa Park but is in doubt after the club were forced to shut their Bodymoor Heath training ground on Thursday after “a large number” of players and staff members contracted the virus.

With the game at risk, Villa’s medics have been talking to the Football Association and Premier League.

The @FA and @AVFCOfficial are working closely together to try to ensure that the club’s #EmiratesFACup third round tie with @LFC can go ahead as planned at Villa Park tomorrow evening.

Final confirmation will be made tomorrow pending the results of additional COVID-19 testing. https://t.co/HmBDvxpQpo

An FA statement on Thursday evening said: “The @FA and @AVFCOfficial are working closely together to try to ensure that the club’s #EmiratesFACup third round tie with @LFC can go ahead as planned at Villa Park tomorrow evening.

“Final confirmation will be made tomorrow pending the results of additional Covid-19 testing.”

An earlier statement from Villa read: “Aston Villa can confirm that the club has closed its Bodymoor Heath training ground after a significant Coronavirus outbreak.

“A large number of first team players and staff returned positive tests after being routinely tested on Monday and immediately went into isolation.

Aston Villa can confirm that the Club has closed its Bodymoor Heath training ground after a significant Coronavirus outbreak.

“A second round of testing was carried out immediately and produced more positive results today.

“First team training ahead of tomorrow’s FA Cup match with Liverpool was cancelled.

“Discussions are ongoing between medical representatives of the club, the Football Association and the Premier League.”

It came after Southampton’s third-round tie against Shrewsbury was called off due to an outbreak at the Sky Bet League One club.

The match was due to take place on Saturday, but a number of Shrewsbury players and staff members have tested positive for Covid-19.

The @FA has confirmed that @shrewsweb's #EmiratesFACup third round fixture against @SouthamptonFC will not be taking place on Saturday 9 January at 8pm as scheduled.

The Football Association’s Professional Game Board will meet early next week to decide what will happen to the fixture.

A statement on Southampton’s website read: “Southampton’s FA Cup third-round game at home to Shrewsbury Town will not take place as scheduled this Saturday.

“The club received notice of the decision from the Football Association this morning, after a number of Shrewsbury players and staff members tested positive for Covid-19.”

Shrewsbury said they had “reluctantly” advised the FA they would be unable to fulfil the fixture after medical advice said it would be unsafe for the game to take place.

The League One club have been unable to train since last week and have closed their Sundorne Castle training ground for 10 days.

Rachel Robinson, Shropshire’s director of public health, said in a statement on the club’s official website: “We have been made aware of positive cases of Covid-19 at Shrewsbury Town Football Club.

“We are working closely with the club to help limit any further potential spread. All positive cases, as well as close contacts, are self-isolating for at least 10 days in line with national guidance.

“The club has acted responsibly and taken all the necessary precautions to limit the spread of the virus, which in this case has required closing the training ground and isolating all close contacts.

“The club are also following all the Government’s elite sport protocols, which include regularly testing players and staff.”

Southampton had their own concerns last week after goalkeeper Alex McCarthy tested positive for coronavirus and had to miss his side’s win over Liverpool.

Shrewsbury’s statement added: “The health and safety of all staff members at Shrewsbury Town Football Club remains paramount and the club continually takes all necessary steps to protect all where possible.”

Elsewhere, Middlesbrough have seen their preparations for their game at Brentford disrupted by a series of positive tests.

An update from Rockliffe #UTB https://t.co/W59YtNpeOC

The move came after positive cases among first-team staff and players had been confirmed.

A further round of testing, which also included under-23s players, took place on Thursday morning with the results expected before the weekend.

Derby chief executive Stephen Pearce confirmed on Wednesday the club will send a group of under-23 and under-18 players to play in the FA Cup at Chorley on Saturday following a coronavirus outbreak which has closed their training ground.

Wayne Rooney and Derby’s entire first-team squad will miss the third-round tie in Lancashire, with Pearce revealing nine players and staff within that bubble have tested positive for Covid-19.

Meanwhile, in the Women’s Super League the games between Manchester City and West Ham and Arsenal and Aston Villa were called off after positive tests.