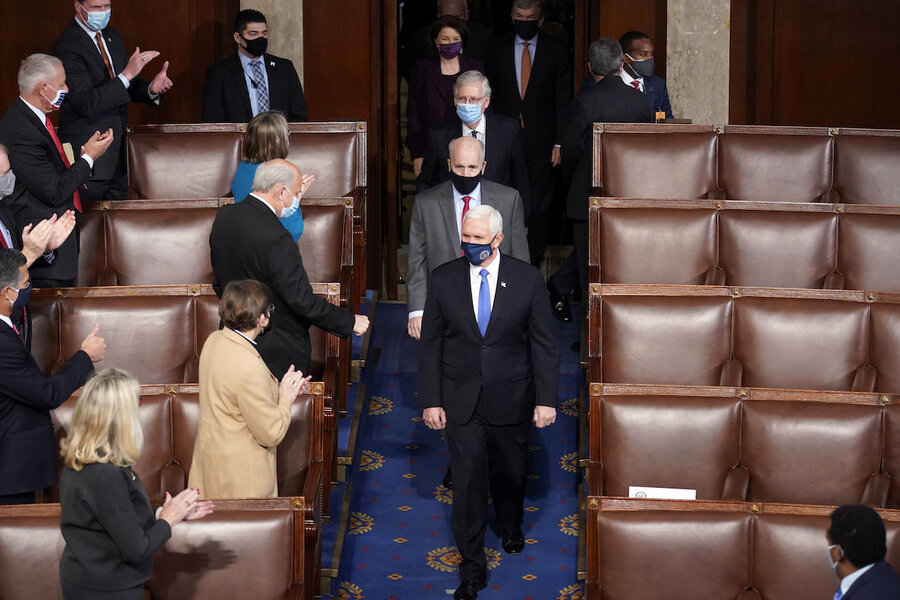 Defying United States President Donald Trump, Vice President Mike Pence said Wednesday that he does not have the power to discard electoral votes that will make Democrat Joe Biden the next president on Jan. 20.

Mr. Pence said in a statement issued minutes before he was to begin presiding over a joint session of Congress to count those votes – which was later disrupted after pro-Trump supporters stormed the Capitol – that it was “my considered judgement that my oath to support and defend the Constitution constrains me from claiming unilateral authority to determine which electoral votes should be counted and which should not.”

In the days before the joint session, Mr. Trump has pressured his vice president to toss electors from battleground states that voted for Mr. Biden to overturn the will of voters in a desperate and futile bid to undo President-elect Joe Biden’s victory in the November election.

“If Mike Pence does the right thing we win the election,” Mr. Trump told thousands of supporters who rallied Wednesday on the Ellipse, just south of the White House, an hour before the count in Congress was to begin.

“All Vice President Pence has to do is send it back to the states to recertify and we become president and you are the happiest people,” Mr. Trump said, repeating a falsehood he has been promoting leading up to the congressional session.

Mr. Trump repeatedly pressured Mr. Pence to act during his more than 75-minute speech to supporters. “Mike Pence is going to have to come through for us,” Mr. Trump said, “and if he doesn’t, it’s a sad day for our country.”

Shortly before the 1 p.m. start of the joint session and even as Mr. Trump continued his verbal haranguing, Mr. Pence made clear in a three-page letter that he would follow the Constitution, not the commander in chief. While Mr. Trump was speaking, Mr. Pence’s motorcade carried him through a heavily-secured Washington toward the Capitol, where thousands of Trump supporters were marching.

Mr. Pence has no unilateral power under the Constitution and congressional rules that govern the count. It is up to the House and Senate to voice objections, and states’ electors were chosen in accordance with state law, not fraudulently.

Beginning at 1 p.m., Mr. Pence began to open the certificates of the electoral votes from each state and present them to the appointed “tellers” from the House and Senate in alphabetical order. At the end of the count, Mr. Pence, seated on the House of Representatives’ rostrum, has the task of announcing who has won the majority of votes for both president and vice president.

Despite his largely ceremonial assignment, Mr. Pence has faced intense pressure from the president and legions of supporters who want the vice president to use the moment to overturn the will of the voters in a handful of battleground states.

Mr. Pence told Mr. Trump during their weekly lunch in the West Wing on Tuesday that he did not believe he had the power to unilaterally overturn electoral votes, according to a person briefed on the one-on-one conversation. This person was not authorized to publicly discuss the private discussion, which was first reported by The New York Times, and spoke on condition of anonymity.

Mr. Trump denied the report in a statement late Tuesday in which he continued to falsely assert Mr. Pence has powers he does not. But the vice president, whose office declined to discuss his plans, was not expected to deliver on Mr. Trump’s request to overturn the electors, acknowledging he has no such unilateral power.

Mr. Pence has spent hours with staff and the Senate parliamentarian to prepare for Wednesday’s joint session, including studying the Electoral Count Act of 1887, which governs the proceedings, and relevant legal opinions.

In fulfilling one of the few formal responsibilities of the vice presidency, Mr. Pence risks compromising his own political future. Mr. Pence is eyeing a run for the White House in 2024 and is banking on his years of loyalty to Mr. Trump, who could be a political kingmaker for years to come, to help him stand out in what is expected to be a crowded field.

Despite claims by Mr. Trump and his allies, there was not widespread fraud in the election. This has been confirmed by a range of election officials and by William Barr, who stepped down as attorney general last month. Neither Mr. Trump nor any of the lawmakers promising to object to the count have presented credible evidence that would change the outcome.

By early afternoon Wednesday, thousands of people, riled up after President Donald Trump addressed the the crowd with his baseless claims of election fraud, descended on the U.S. Capitol as Congress prepared to vote to affirm Joe Biden’s 2020 presidential win. The proceedings were halted when protestors breached the U.S. Capitol, erupting the House chambers into confusion and chaos.

As he faced growing pressure from allies to condemn the violence Wednesday afternoon, Mr. Trump tweeted, “No violence!” adding: “Remember, WE are the Party of Law & Order – respect the Law and our great men and women in Blue.”

Republican lawmakers repeatedly called for Mr. Trump to more vocally condemn the violence and to call to an end to the occupation.

Mr. Pence called on protesters to leave the Capitol immediately, going further than Mr. Trump who merely called for his supporters to “remain peaceful.”

In a tweet Wednesday afternoon, Mr. Pence said, “This attack on our Capitol will not be tolerated and those involved will be prosecuted to the fullest extent of the law.”

More than two hours after protesters stormed the Capitol, Mr. Trump, in a video message, is urged supporters to “go home” but is also keeping up false attacks about the presidential election.

Mr. Trump opened his video, saying, “I know your pain. I know your hurt. But you have to go home now.”

He also went on to call the supporters “very special.” He also said, “we can’t play into the hands of these people. We have to have peace. So go home. We love you. You’re very special.”