Indonesia plane crash: 'Debris' from flight appears to be found

Footage has emerged of “suspected debris” being pulled from the water after all contact with an Indonesian passenger plane was lost. The domestic Sriwijaya Air flight SJ182 plunged more than 10,000 feet of altitude in less than one minute, according to flight radar data. There are growing fears for the passengers and crew aboard the domestic flight as a desperate search for survivors gets underway.

Footage from local TV broadcasts and on social media shows what appears to be debris being pulled from the water in the Java Sea.

It has yet to be confirmed whether the debris is part of the plane.

Indonesia’s transport ministry confirmed that a search and rescue investigation was under way after contact was lost with the Sriwijaya Air flight SJY 182 from Jakarta to Pontianak. 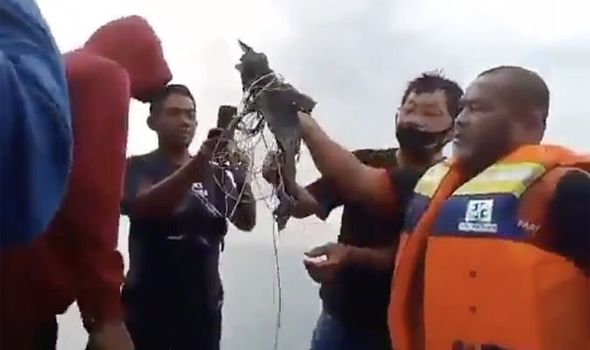 The dramatic plunge in altitude took place just four minutes after departure from the Jakarta airport.

It flew a short distance north of the airport and above the Java Sea when contact was lost.

According to AirLive.net, the plane had 62 people on board, including 56 passengers, four crew members and two pilots.

Adita Irawati, the Indonesian Transport Ministry spokesperson, said: “At this point, we are investigating and coordinating the matter with Basarnas (the search and rescue agency) and KNKT (the transport safety body).

“We will release more information as soon as there are developments.”