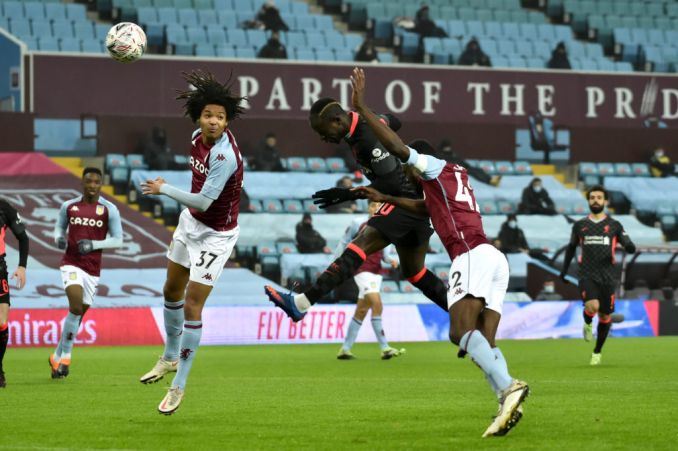 The Reds eventually clinched a 4-1 third-round win after Louie Barry’s equaliser for coronavirus-hit Villa threatened to embarrass the visitors.

Villa’s first-team squad had been decimated by coronavirus, with nine players testing positive along with five staff, forcing the club to quickly call on the youngsters.

The game had been in doubt until Friday morning, but disciplined Villa produced a dogged display, with Barry, goalkeeper Akos Onodi and Mungo Bridge announcing themselves.

It owed much to Liverpool’s relaxed first-half approach – despite starts for Salah, Jordan Henderson, Fabinho and James Milner – but Villa, made up of under-18s and under-23s, deserved their moment.

Several members of the squad are yet to pass their driving test and were dropped off at Villa Park by their parents, but they held their own for an hour against the Premier League champions.

Four of them – Barry, Ben Chrisene, Mo Sylla and Lamare Bogarde – were not even born when Milner made his debut for Leeds in 2002.

It was men against boys and Liverpool needed just four minutes to open the scoring when Mane headed in Curtis Jones’ right-wing cross.

Wijnaldum should have made it 2-0 five minutes later but lifted the ball over from six yards.

The debate over whether the game should have gone ahead – or indeed about Jurgen Klopp’s team selection after frequent complaints about his players’ workload – was a subplot, but Liverpool failed to build on their superior class and experience.

Chrisene, at 16, was the youngest for the hosts, with Callum Rowe the most senior at just 21, and despite the early goal, Villa mainly kept the Premier League leaders at bay.

Liverpool were in a no-win situation where they were expected to put several past Villa, but they struggled to go through the gears and when they did Onodi denied Fabinho and Mane.

Everyone at @AVFCOfficial should be extremely proud of tonight’s performance. A great effort in tough circumstances 👏#AVLLIV | #FACup pic.twitter.com/70slJC7z70

The hosts grew in confidence, winning a few corners, as they looked to take advantage of a Liverpool side who lacked a killer instinct or a desire to really put Villa to the sword.

Onodi saved from Salah and Milner shot over before Liverpool paid the price when Villa stunned them to equalise five minutes before the break.

It was a deserved leveller, with Liverpool lackadaisical, and as Klopp’s side pushed to regain the lead after the break, Fabinho headed straight at Onodi.

Salah then had the ball in the net but was pulled back for kicking it out of Onodi’s hands – although the decision was debatable.

Wijnaldum started the goalrush on the hour when he found the bottom corner from the edge of the box.

Two minutes later Mane looped in a header for his second, and Salah wrapped it up when he turned in the area to fire low past Onodi.

Those goals ended the contest, but Thiago Alcantara hit the bar with five minutes left.

Mikel Arteta: No one can question what Mesut Ozil has done for Arsenal