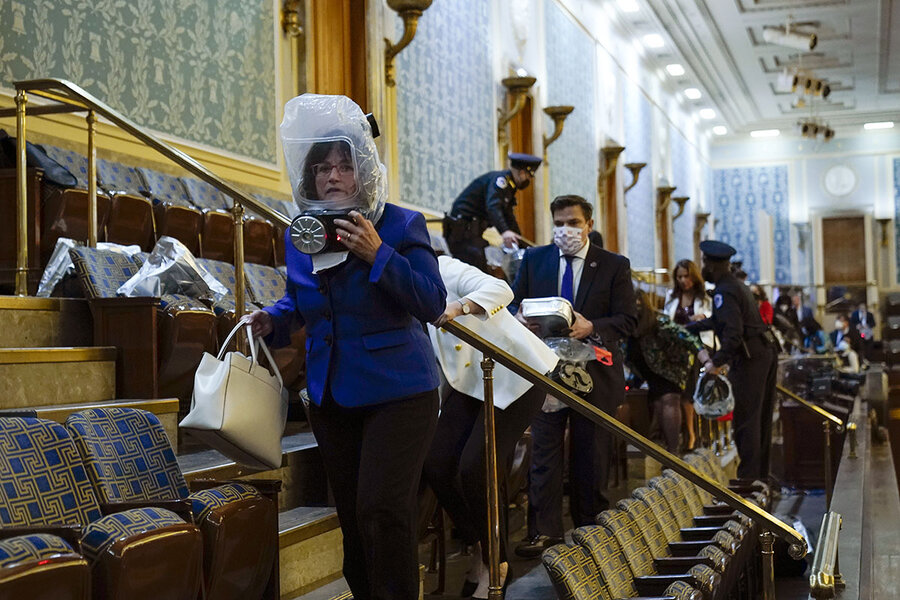 It was a shocking finale even for a presidency defined by the use of combustible rhetoric. President Donald Trump addressed supporters on the Ellipse prior to their explosion, continuing to falsely insist he had won the November election in a landslide and repeating baseless claims of Democratic voter fraud, which have been dismissed by his former attorney general, William Barr.

Moments before the Capitol’s windows began rattling, Senate Majority Leader Mitch McConnell said the claims were untrue and that for Congress to overturn the results of the vote would “damage our Republic forever.”

Many of the rioters were white. The Proud Boys, a male-chauvinist organization with ties to white nationalism, were present in force at Wednesday’s Trump rally.

White supremacy may have been a component of the motivation for many in the crowd, says Mr. Johnson, though the full nature of the insurrection is yet unknown. In that sense it may have been driven by a desire to protect the privileges of a certain sector of society.

Hyperpartisanship and political polarization could also have fueled the mob’s rage. Political opponents are today too easily seen as enemies, as “others” who are an existential threat to the country.

“Politicians have tapped into this fervor and used it for political expedience,” says Mr. Johnson. “And the lack of principled leadership to walk a fickle and easily swayed public away from the ledge and accept their fellow Americans as fellow Americans and not as enemies is the story of the last five years.”

“These kinds of words have consequences”

In some respects, racialized violence has bracketed President Trump’s time in power.

The Unite the Right white supremacist rally of 2017 ended with the death of a counterprotester. The president said afterward that you had “people who were very fine people on both sides.”

President Trump’s response Wednesday to the Capitol riot was initially similarly respectful to the instigators, and continued to promote his unfounded election claims. He released a recording late Wednesday afternoon that said the election had been “stolen” and was a “landslide,” and said to those who had stormed the national Capitol, “You have to go home now. We have to have peace. We love you. You’re very special.”

Those who made up the mob may have heard those words as a structure of permission for their acts, or absolution.

“These kinds of words have consequences,” says Eric Foner, a Columbia University professor of history and renowned expert on Abraham Lincoln and Reconstruction.

Professor Foner says many Black Americans are not surprised by political violence, having been the target of past efforts to chill voting and otherwise deny them the rights of citizenship.

The only real parallel might be 1860 and Lincoln’s fears that the government might be overthrown, dooming the nation even as he took office.

“Violence is built into our political experience, although lately we haven’t quite seen this kind of thing,” Professor Foner says.

On Wednesday the entire Washington, D.C., National Guard was activated to help deal with the situation. It was unclear whether Congress would resume counting Electoral College votes, perhaps in more defensible circumstances, but a number of lawmakers expressed a desire to resume.

“Whatever it takes. These thugs are not running us off,” said Sen. Joe Manchin, Democrat of West Virginia.

President-elect Joe Biden, in remarks from Wilmington, Delaware, called on rioters to end their occupation of the House and Senate’s halls.

“This is not dissent. It’s chaos,” said Mr. Biden.

Mr. Biden, due to be inaugurated Jan. 20, called on President Trump to appear in person himself and denounce the occupation and call for his supporters to stand down. President Trump’s own words had helped cause the crisis, Mr. Biden suggested.

“At their best, the words of a president can inspire,” said Mr. Biden. “At their worst, they can incite.”

A farewell to @realDonaldTrump, gone after 57,000 tweets