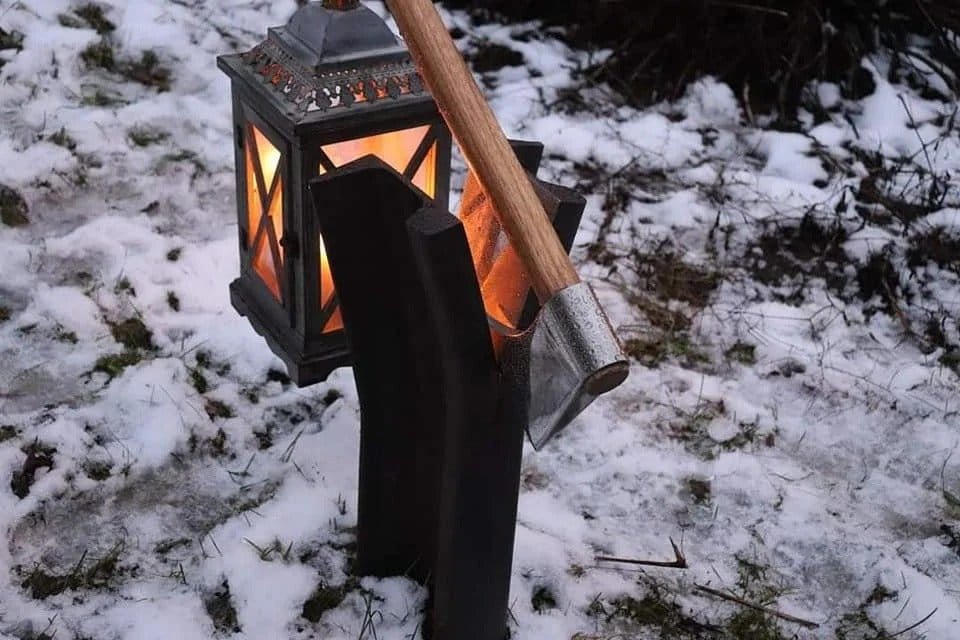 This railroad lamp will indicate the way to the house, but for it the master made a very interesting suspension – a rail split with an ax.
Actually, the lantern is planned to be hung in the winter, and in the summer there will be a plate with the house number.
Why exactly an ax splitting rail? The master explains this by the fact that few people will pay attention to the ax sticking out in the log, but the ax in the rail will be remembered by many.
Tools and materials:
-Part of the railroad;
-Vise;
-USHM;
-Welding equipment;
-Marker;
-Clips;
– Hammer;
-Stainless steel;
-Seed paper;
-Polishing paste;
-Paint;
-Sheet bending;
-Wood block;
-Polishing and grinding discs;
-Circular saw;
-Electric jigsaw;
-Knife;
-Coating for wood;
-Aluminum adhesive tape;
-Hook;
– Gas burner;
Step one: cutting the rail
The total length of the rail with which the master will work – 750 mm. As you can see in the first photos, the rail needs to be bent. It is difficult to bend such a large piece, and the craftsman decided to first work with a piece 270 mm long and then weld the two rails together.
For cutting, he used a 230 mm angle grinder with 2 mm cutting discs.
characteristics, the maximum depth of cut for this angle grinder is 65 mm. But with the correct position, you can reach a depth of almost 85 mm.
The craftsman measured and marked the center line around the rail, and then made cuts along the marked line.
It is important that the bottom of the cut groove remains as “warm” as possible. If the slot cools down, the metal begins to shrink and the disc clamps.
If you feel that the cut-off wheel starts to get stuck, carefully lift it up a little and carefully, after a while, push back.
Do not press hard on the disc.
The video shows what technique the master uses when cutting the rail. < br> 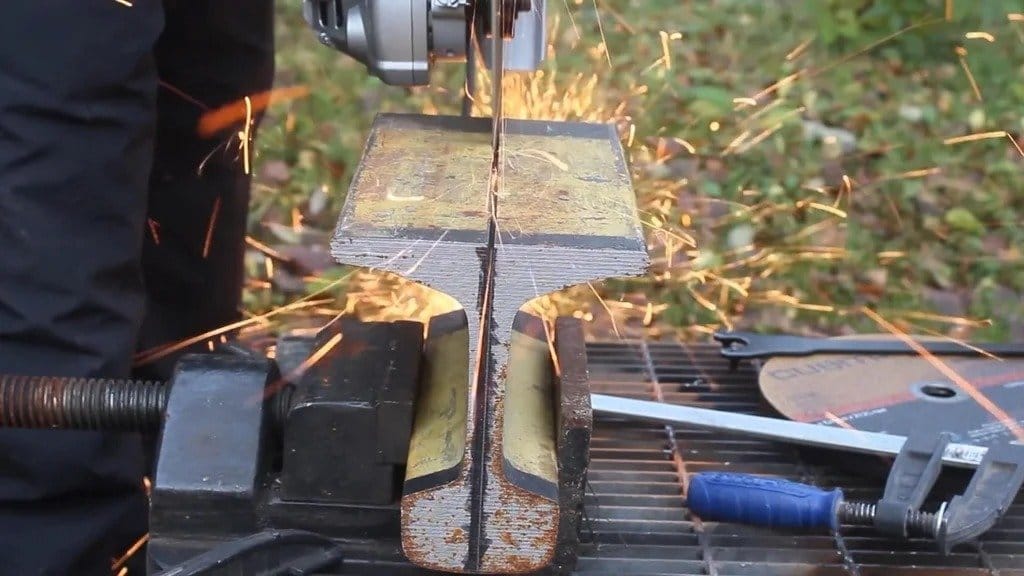 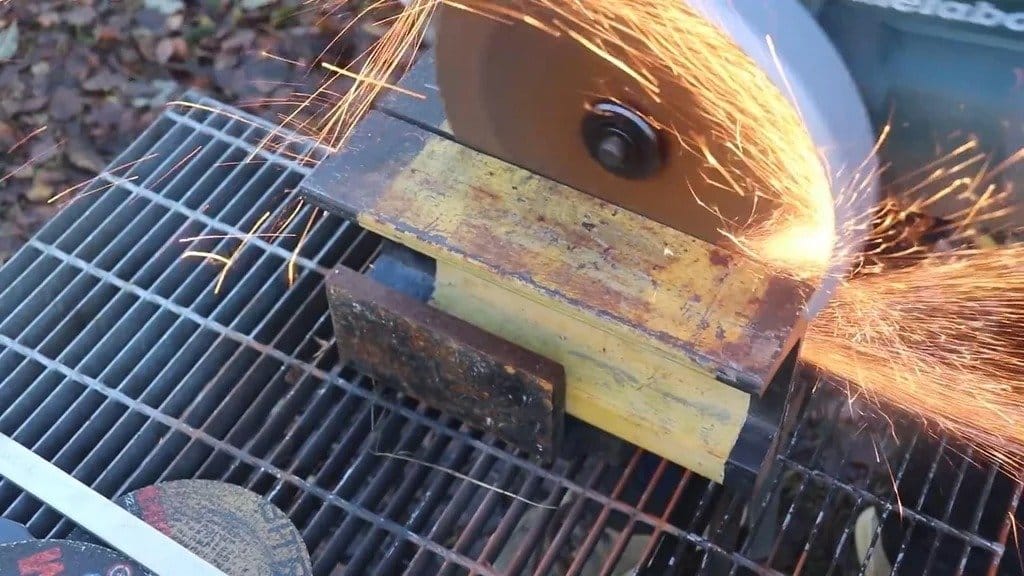 Step two: bending the rail
Now you need to bend the sawn pieces of rail. The master has an 8-ton press, but he would not have coped with such a task.
He decided to bend with a vice and a gas burner.
The two halves of the rails are installed in a vice. Metal bars are laid between the parts, along the edges. Then he warms up the middle of the rails with a torch and tightens the vise screw. Then it warms up and tightens again. 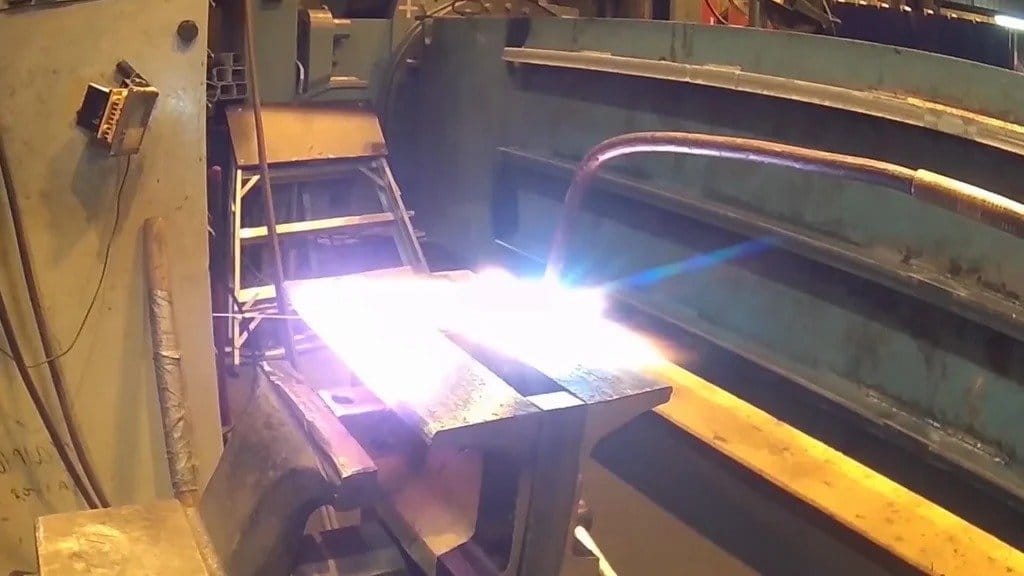 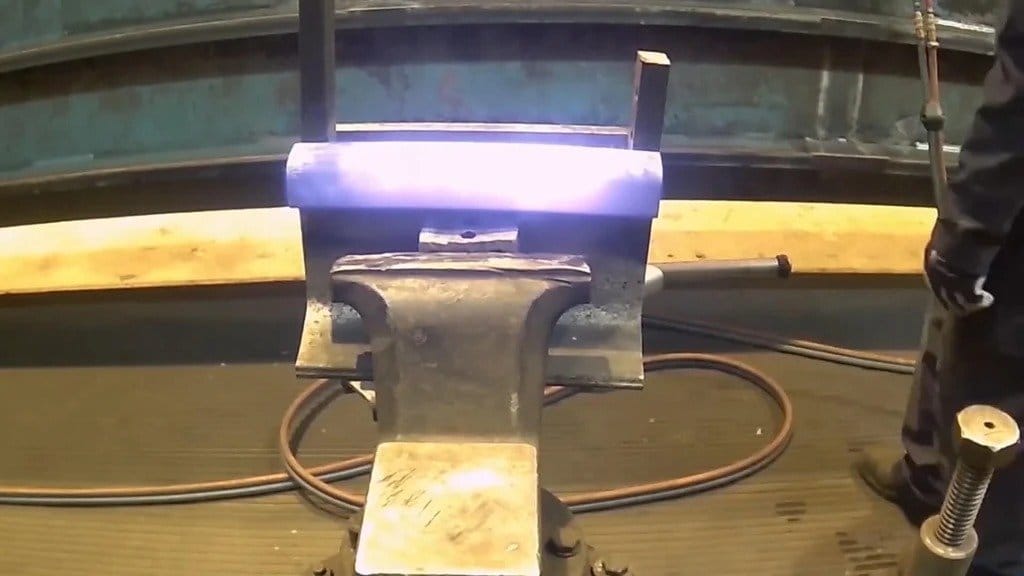 Step three: linings
The rail will be installed outside and naturally rust, but the master wanted both the ax and the split part to be mirrored. Then he decided to cover the inner sides of the rail with 1.5 mm thick 316 stainless steel sheets.
Cut two pieces to size. The blanks must cover the inside and one end of each half. I pressed and grabbed the parts to the rails. Before welding, tack welds are ground to surface level. Welds parts. Weld seams must be tight. It is important that there are no holes or pores in the welds. Otherwise, water will get between the welds, and when it freezes in winter it will expand and tear off the plates.
After welding, I sanded the welds with an angle grinder. 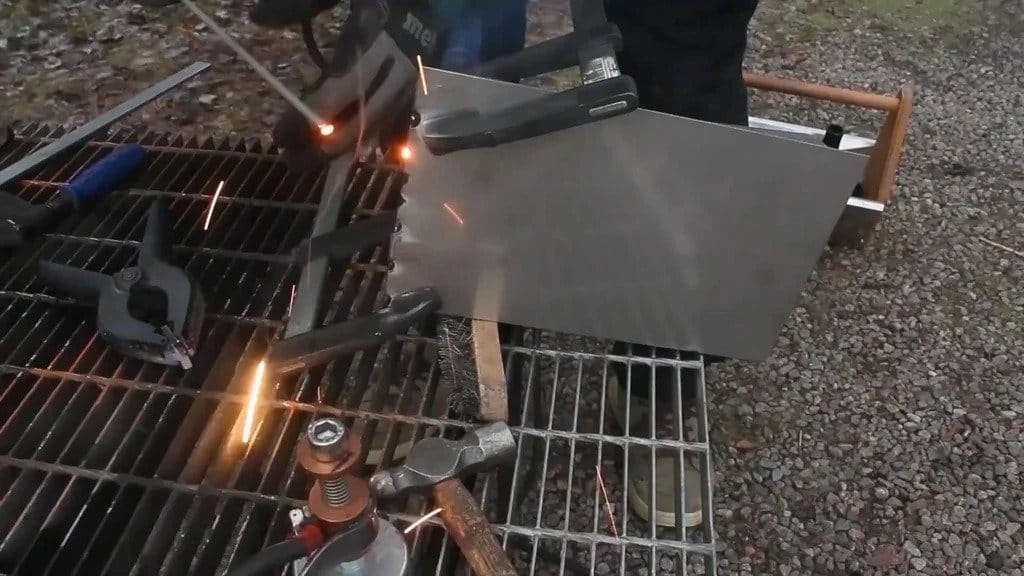 Step four: sanding, polishing
To get a beautiful and shiny surface, you need to sand and then polish the surface.
The master began to sand with paper with a grit of 60 grit. Sanding until all scratches were removed, and then continued with 80-grit sandpaper. Gradually reducing the grit, the master finished sanding with 240 grit sandpaper.
Then he polished the surface using polishing paste and an orbital sander.
Step five: welding
It's time to weld all the rails together. < br> Before welding, he cleaned all the edges of the welds. Then he cleaned the parts of paint and rust.
Connected the cut rail halves from the opposite end of the stainless-coated end. Grabbed the edges. Then I welded it to a long piece of rail. 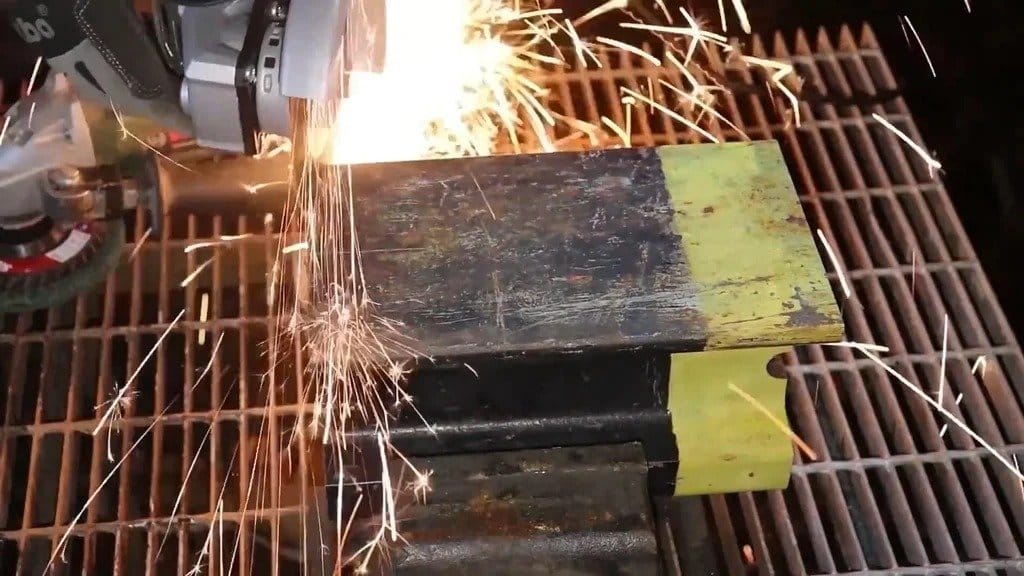 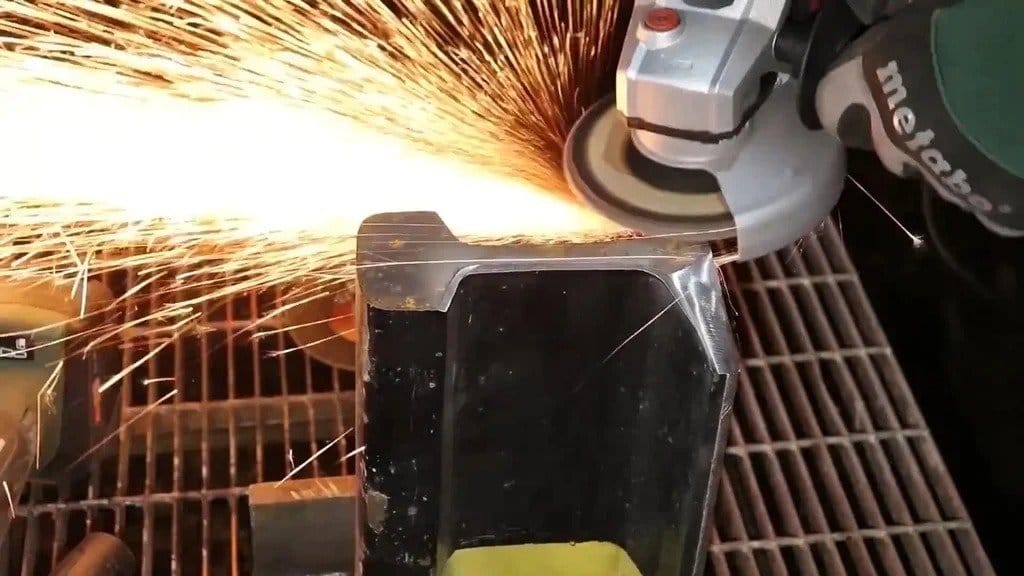 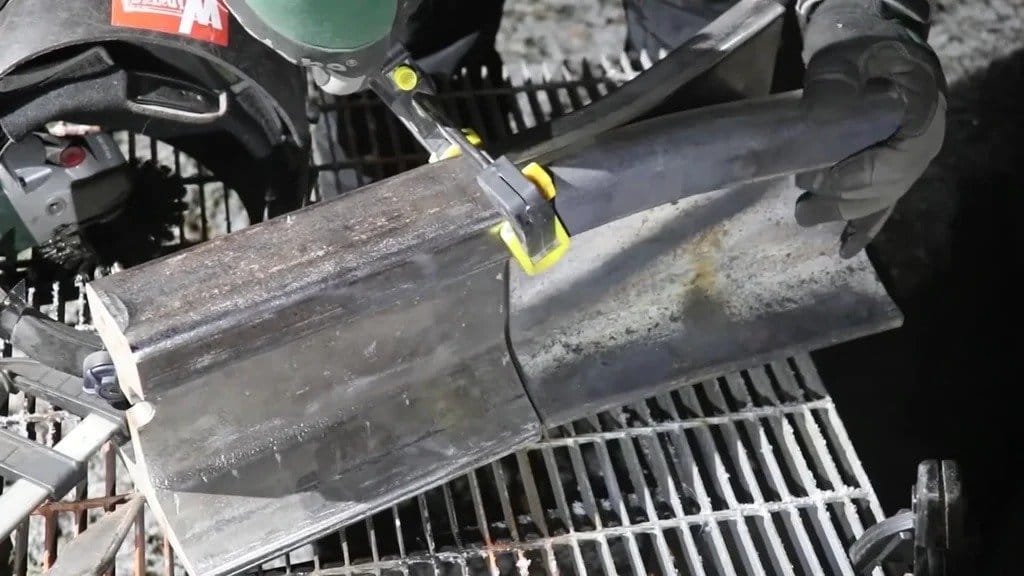 After welding, it cleans and grinds welded seams. The weld is then ground with a tungsten carbide pick. Tungsten carbide cutters make a rough surface with scratches resembling a rail surface.
Two pieces of reinforcement 20 mm thick and 300 mm long are welded to the end of the side that will abut against the ground.
Step six: painting
Before painting it is necessary to close the stainless steel surface.
Since it takes too long to get a good rusty surface on the rail, he painted it to make it look rusty.
There are special paints with a rust effect, but the craftsman decided to use his own “mixture.” The craftsman covered the surface with several layers of gray, white, red and brown paint and brushed the surface with a wire brush. This gives a nice mottled surface.
When the paint slowly peels off, the surface starts to rust, and after a couple of years it will have a great rust, while the inside retains its mirror-like “fresh cut” look.
Now you need to install the rail to the designated place. 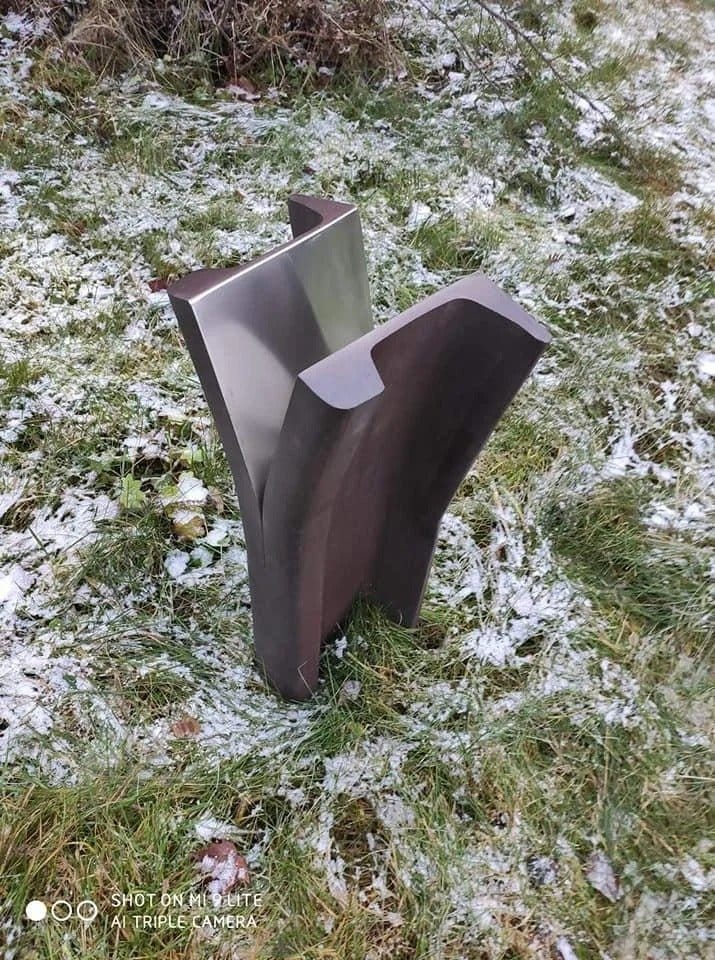 Step Seven: Making the Ax
The ax blade is made from a 3mm thick 316 stainless steel plate.
The main body is made from a single piece. The master cut out the workpiece angle grinder. Then he bent it with a homemade bending machine and hydraulic vise. 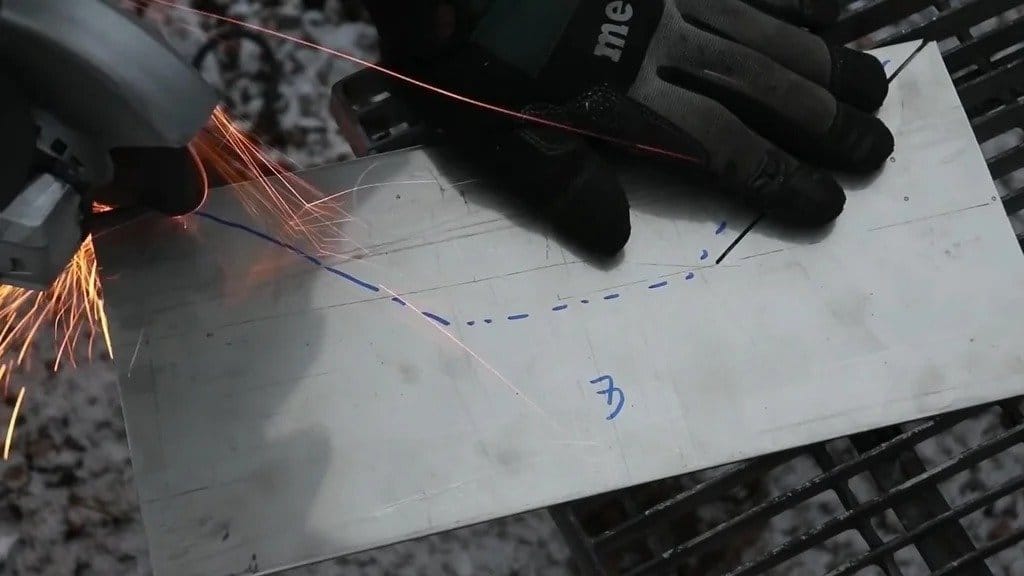 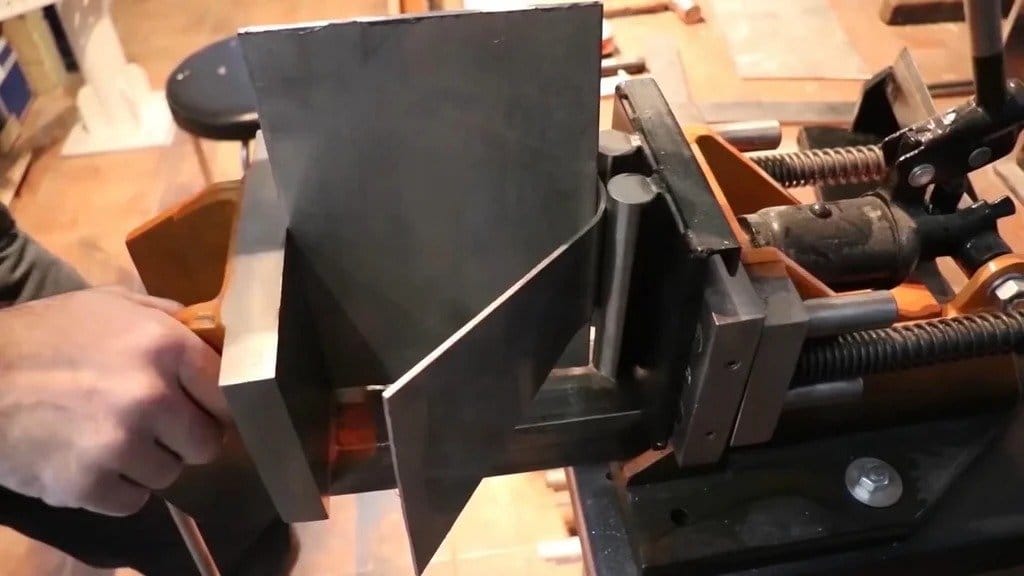 Cut and welded the upper part of the ax. Cut off the bottom to give the desired shape.
Grind, polish and sharpen the blade. 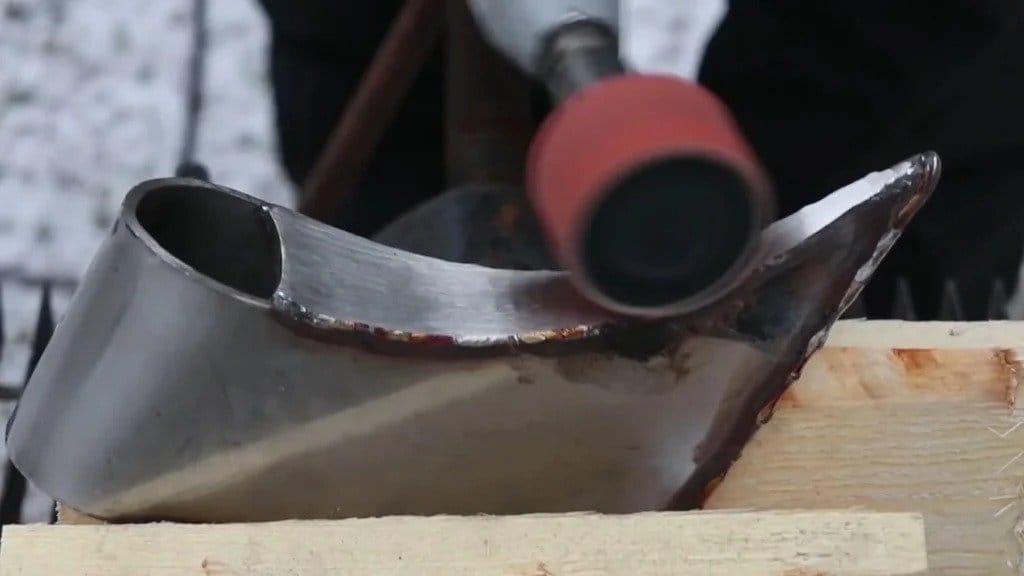 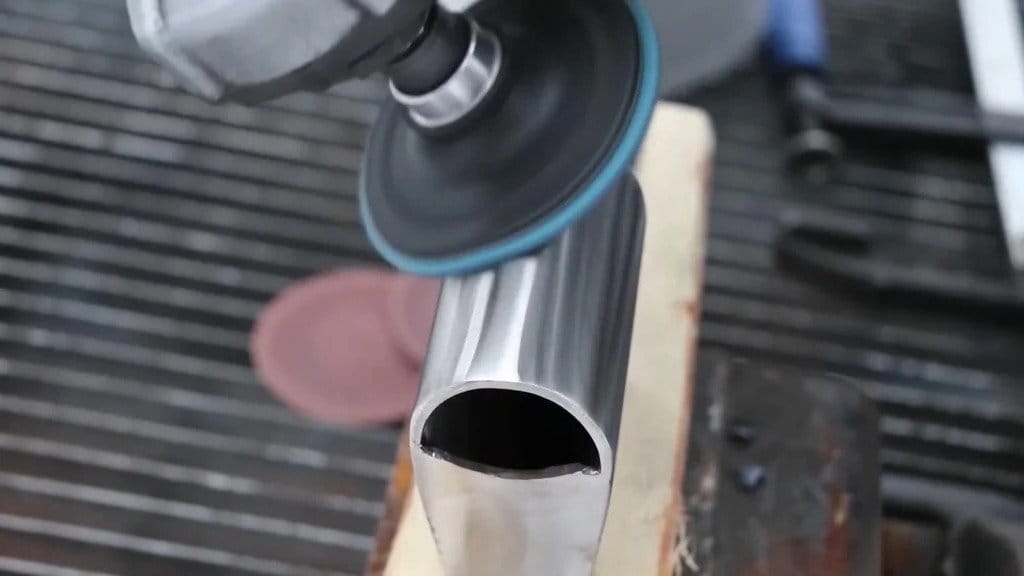 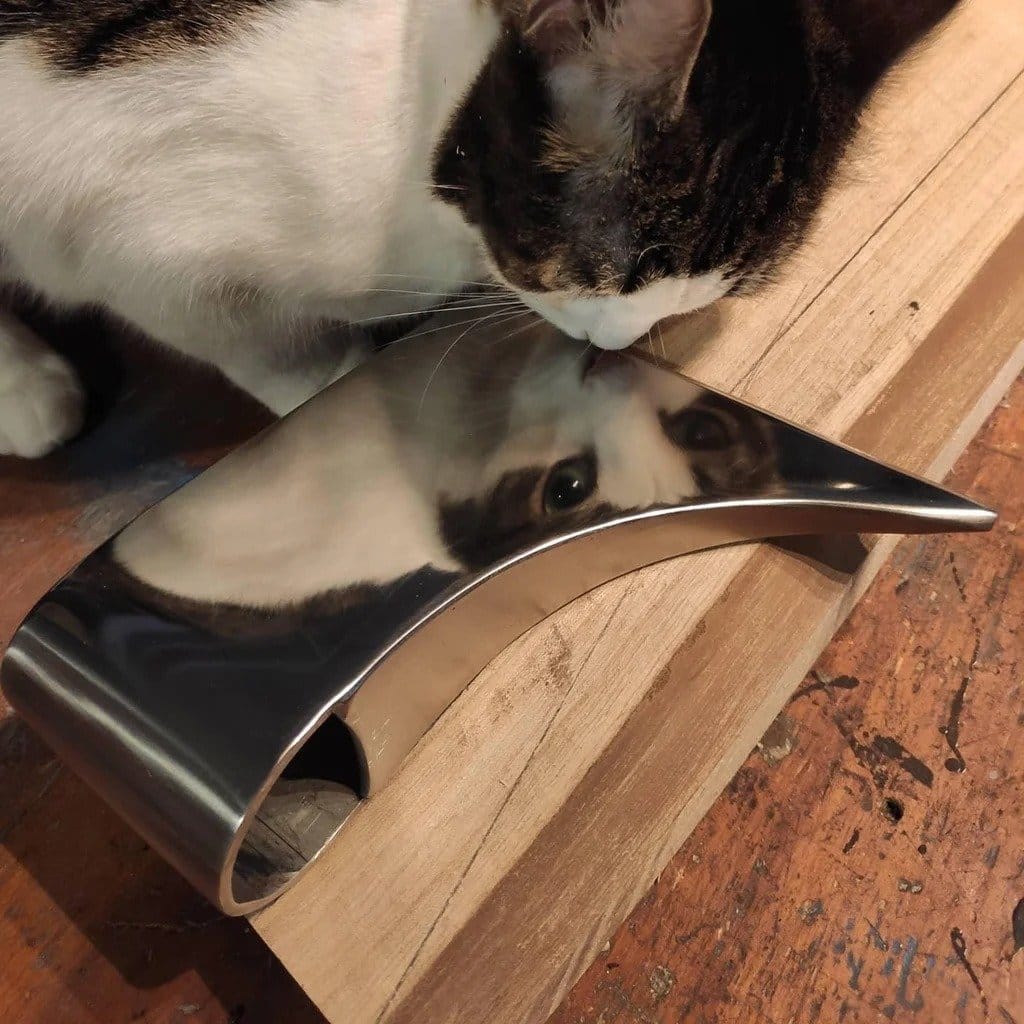 Step eight: the ax handle
The handle is made of oak. The shape of the handle is traditional for a two-handed Finnish ax. The handle along with the ax will be on the street, and so that it lasts longer, he immersed it in a special solution overnight.
The preservative has changed the oak color to too yellowish. To restore the oak to its natural color, he covered the top of the handle with dye wax.
Now you need to install the ax on the ax. 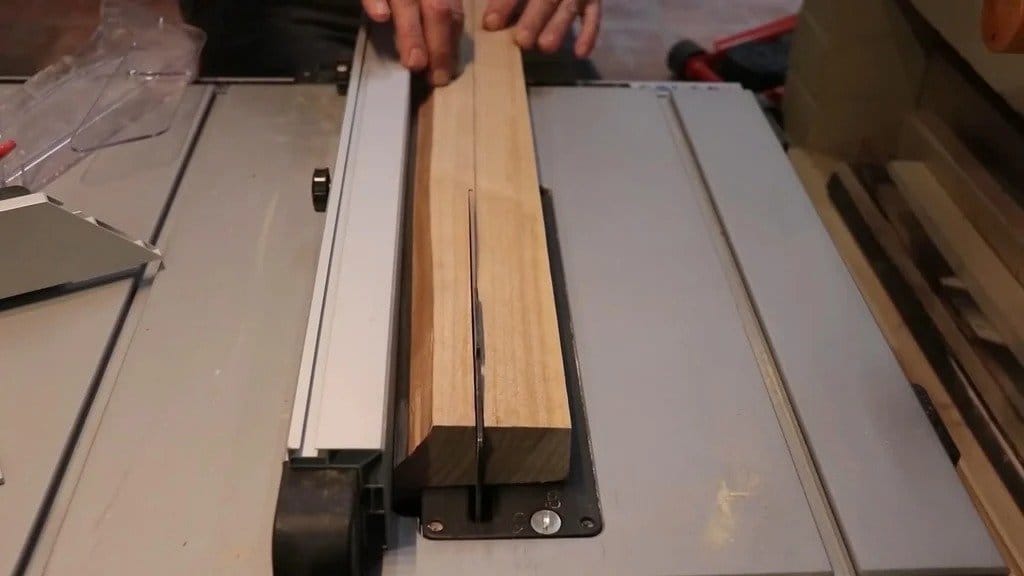 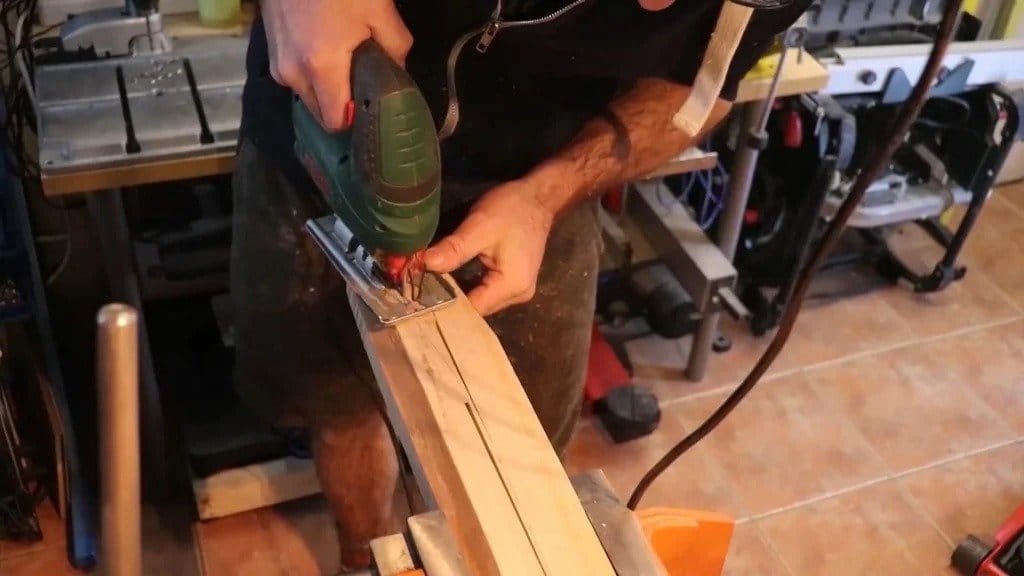 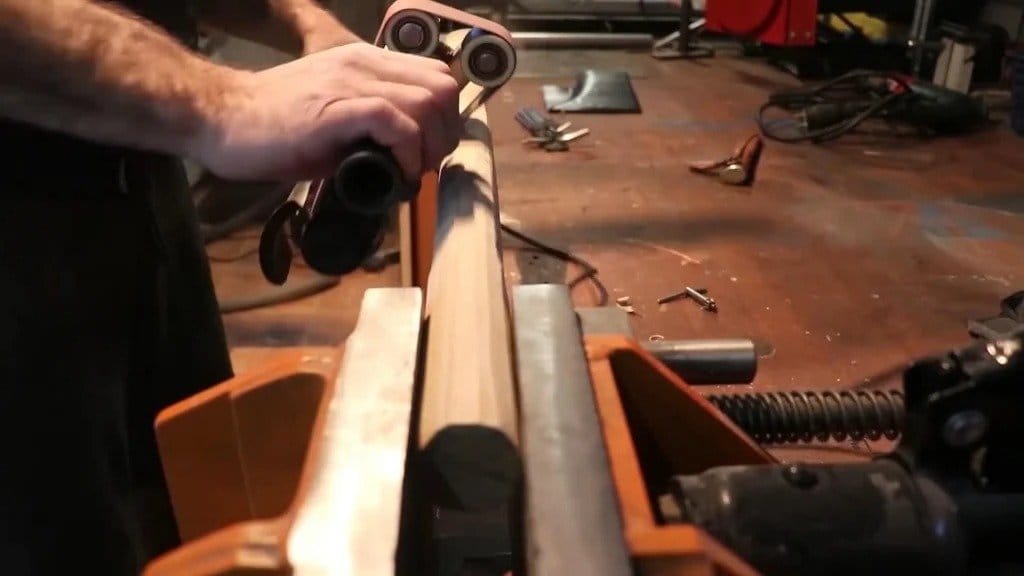 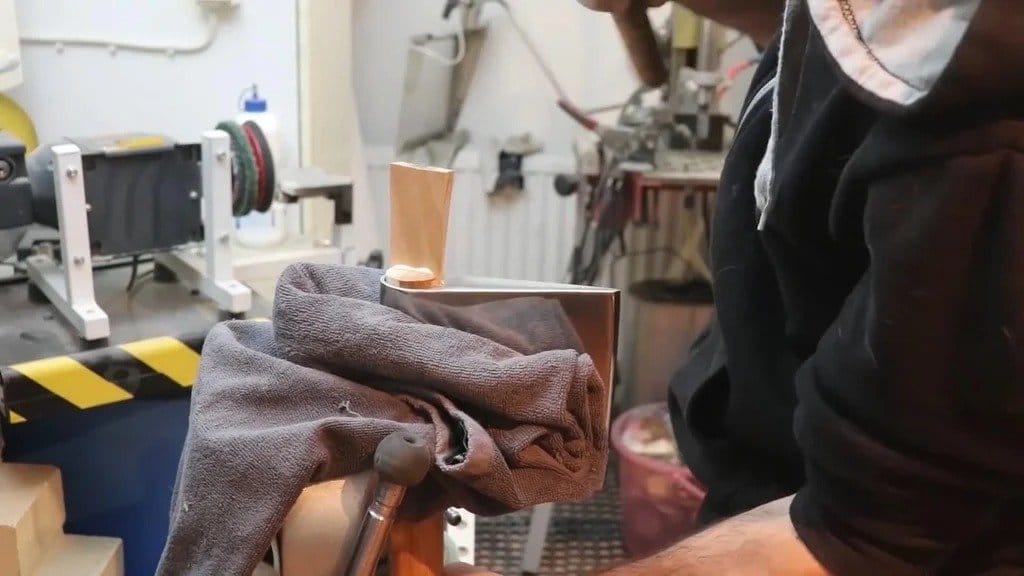 Step nine: installing the ax
To protect the ax, he glued aluminum tape to the blade. Then he set the ax into the rail cut and grabbed it in two places. He took off the adhesive tape, and cleaned and painted over the welding place.
At the end of the handle I screwed in a hook and hung a lantern. 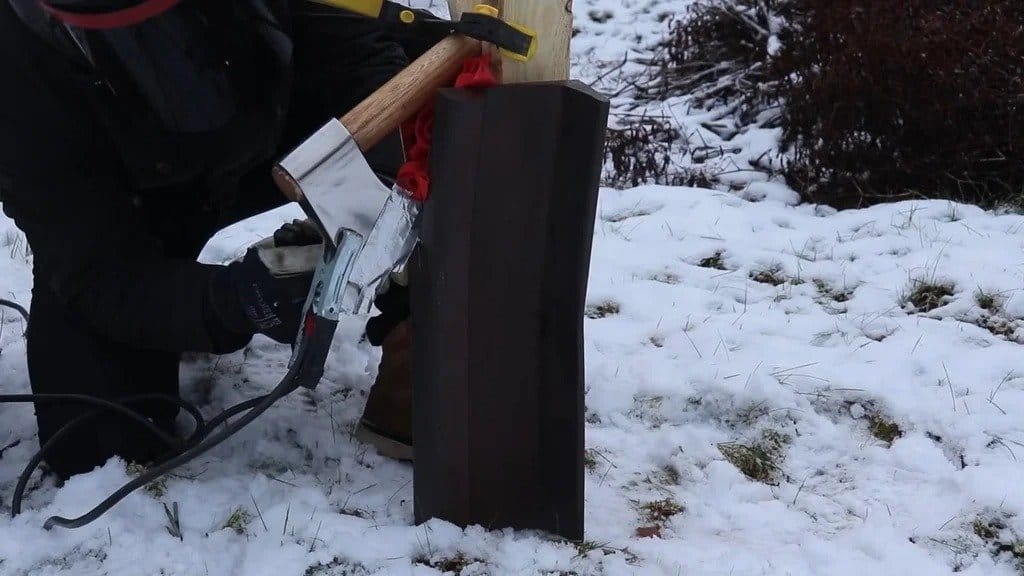 Everything is ready.
The whole process of making such an unusual sign can be seen in the video.

How to light a candle with a snap of your fingers

Controlling the block of switches and sockets using a smartphone