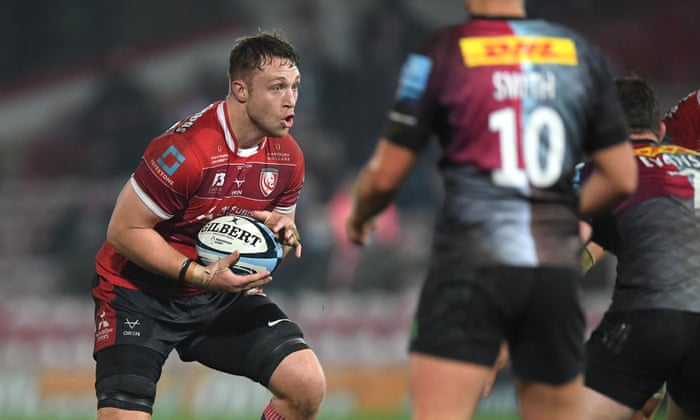 Ruan Ackermann considered leaving Gloucester when his father, Johan, ended his contract as head coach at Kingsholm prematurely to move to Japan last May, but the lure of playing for England proved too strong. The back-row, who qualifies through residency having joined the Premiership club in 2017, had only had one boss in his senior career, which started with the Lions in his native South Africa.

“The biggest thing for me is the need to be challenged in life,” the 25-year-old says. “It was a shock to me when my father left Gloucester because I did not know anything about it. He could not come and say goodbye to everyone. The thought of moving on did go through my mind, but I saw it as an opportunity to grow as a player and move out of a comfort zone, and prove to someone new what kind of player I was.

“When George [Skivington, current head coach] arrived, you quickly got a feel of how he wanted us to play. The first thing I said to him was that he had the same mentality as my father when it came to the pack, and the same style of play. It made it easy for me to move on from my dad. Things have not gone for us this season, but it is all stuff that we can control. There is no questioning the character and belief in the squad.”

Ackermann qualified for England at the end of last season. Head coach Eddie Jones spoke to him at the beginning of that year, but there has been no contact since with a player who played for South Africa at under-20 and A level, and can operate as a No 8 or blindside flanker.

“I have not had any interest from South Africa in the last 18 months,” Ackermann says. “England have grown since last year’s World Cup and the prospect of playing for them has excited me. There is a Lions tour coming up and, even if you are not involved, you feel how players react to it, the excitement it generates and how big an achievement it is to make the squad.

“I had discussions with Eddie Jones before the first lockdown, but it was nothing massive. He told me what I should work on and what he liked about me. There has been nothing since then and I just need to play to the best of my ability, making sure that I am ready if it ever happens and take it with both hands.”

An improvement in Gloucester’s form would help. They went into the sixth round of the Premiership at the bottom of the table, having played all their matches unlike some of their rivals who have been awarded cancellation points, but it is hard to argue that it is a false position: since beating Bath at the beginning of January last year, they have lost 14 of the 18 Premiership matches they have played.

They are at Newcastle on Saturday and their only away win in the past 12 came at Worcester in August, Skivington’s first match in charge. “It will be a really tough game,” Ackermann says. “Their forwards work hard and they are playing well with a lot of belief. We will probably be underdogs but it is another challenge for us.

“It was a difficult time when George started, with people coming and going. There was not time as a squad to sit down and discuss things. Results have not gone our way this season, but it is not about how we are playing, intent or belief, but the small things that happen during a game and the need to learn from them. Results will come through experience and you can see how the young players are growing. I am happy I stayed here; the reward will come.”