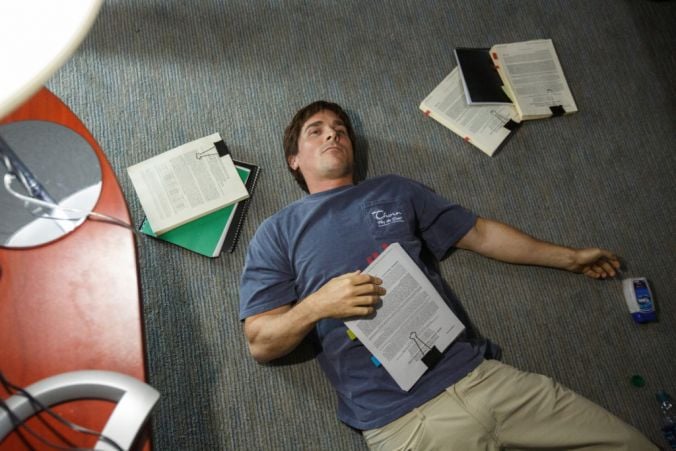 Resolution 1: Expand your horizons by trying something new

Directed by Judd Apatow, The 40 Year Old Virgin is a surprisingly sweet and endearing comedy of modern manners, proving that in the battle of the sexes, it’s always the ‘sex’ that creates conflict. Steve Carell is utterly adorable as a nerdy loner whose idea of a fun weekend is spending three and a half hours preparing “all the accoutrements” for an egg salad sandwich, only to realise he doesn’t have any bread.

The actor puts his character through the emotional wringer, including a hysterical chest-waxing scene that attests to Carell suffering for big laughs (yes, it’s real). He gels wonderfully with Catherine Keener. “Do you have protection?” asks her forty-something eBay store worker. “I don’t like guns,” he replies innocently.

Occasional detours into mucky-minded toilet humour sit comfortably next to the touching heart-to-hearts between characters. While Carell’s middle-aged loner might struggle in his quest to sample life’s carnal pleasures, The 40 Year Old Virgin scores highly.

Resolution 2: Take better care of your finances and invest wisely for the future

A fool and his hard-earned money are soon parted and in 2008, many of us turned out to be unwitting fools when the mortgage crisis in America catalysed the collapse of financial institutions.

Wall Street’s meltdown doesn’t sound like ripe fruit for a cocktail of potty-mouthed hilarity and heartbreaking drama but Adam McKay, director of the Anchorman films, begs to differ. Stepping away from the dim-witted Will Ferrell comedies that have made his name, McKay draws inspiration from Michael Lewis’s non-fiction account of the housing and credit bubble to dramatise the incredible true story of the men, who made a killing by wagering against the US economy.

The Big Short is a blisteringly funny and provocative portrait of irresponsibility, fraud and gaudy excess, brought vividly to life by a superb ensemble cast including Steve Carell, Christian Bale and Brad Pitt. We might not always keep up with McKay’s dazzling film and its rapid-fire, whipsmart dialogue but by the end credits, we’re not far behind.

Forget the sugar and spice and all things nice. The girls in Pitch Perfect screenwriter Kay Cannon’s filthy-minded directorial debut are full of sexually suggestive emojis, bold self-expression and a generous smattering of insecurities.

They are doyennes of social media, who talk openly about their feelings and have fewer sexual hang-ups than their emotionally bruised parents, whose vigour has been eroded by failed marriages, financial responsibility and the fear of growing old.

Blockers engineers a hilarious battle of wits between these two generations during one eventful prom night. Less raunchy and riotous than Girls Trip but aimed at a similar if slightly younger audience, Cannon’s potty-mouthed comedy tempers the bittersweet with the saltiness of some outrageous set pieces including a bout of full-frontal roleplay that leaves nothing to the imagination.

The film’s depiction of empowered, self-aware young women, who call the shots about when they will lose their virginity, is extremely timely. Naughtiness sexts niceness throughout Brian Kehoe and Jim Kehoe’s warm-hearted script, which is punctuated with poignant scenes of self-reflection and parental pride.

Resolution 4: Start a new exercise regime and feel healthier inside and out

Jillian Bell delivers a winning performance as a 20-something who needs to lose weight to avoid a medical emergency in Paul Downs Colaizzo’s feelgood comedy drama. Inspired by a real-life journey of self-improvement, Brittany Runs A Marathon has faint and flattering echoes of Trainwreck starring Amy Schumer in its initial set-up of a New York City singleton (Bell) drinking to excess without any consideration for the consequences.

Following a visit to her doctor, the eponymous heroine accepts an invitation from her seemingly perfect neighbour (Michaela Watkins) to join a local running group and avoid the prohibitively expensive fees of a gym. Threaded with earthy humour, Downs Colaizzo’s debut feature celebrates the power of change.

Bell shed 40 pounds filming the role and that marked physical transformation feeds into a heartfelt and sporadically hilarious performance that will strike a chord with anyone who has looked into a mirror and lamented the image staring back.

Resolution 5: Find more time for yourself in a world of distractions

Tom Hanks crash-lands in the ocean in the eye of a storm and washes up on a remote island with only the clothes on his back and several packages from his downed plane in Robert Zemeckis’s riveting Robinson Crusoe yarn.

The two-time Oscar winner’s physical transformation is startling. By the conclusion, he looks emaciated, eyes and cheeks sunken. On occasions, director Zemeckis has been guilty of pat sentimentality in his work. Here, he noticeably reins himself in, going out of his way to steer clear of a fairy-tale ending. In the first 30 minutes, he demonstrates mastery of action set-pieces, orchestrating a hair-raising airplane crash.

Cast Away is an unforgettable journey to paradise lost for its central character and viewers, exploring the endurance of the human spirit in the most trying circumstances. It celebrates our capacity to overcome all obstacles that life dares to throw in our path. Surviving is easy: it’s living that pushes us to the limit.

Resolution 6: Dip your toes back into the deep, shimmering waters of the dating pool

Single, love-starved characters in Hollywood romantic comedies should count their blessings. Despite all the misfortunes and humiliations that litter the path to enduring happiness, these desperate singletons invariably snag Mr or Ms Right by the end credits.

Dan In Real Life follows the well-worn template but sketches its quirky characters with affection and delivers each set-piece with such wit and panache, it’s hard to resist Peter Hedges’ tender and bittersweet confection.

The unlikely central pairing of Steve Carell and Juliette Binoche generates plentiful sparks of sexual chemistry that still smoulder after the film’s comic centerpiece: a delirious and farcical shower sequence that, refreshingly, doesn’t rely on nudity for a titter. Dan In Real Life has charm and snappy dialogue in abundance, and a winning central performance from Carell. By turns hysterical and deeply touching, Hedges’ film breathes fresh air into a familiar slice of dysfunctional life.

Resolution 7: Live your best, authentic life and don’t let anyone else control your destiny

It would take several hours to fully explain the intricate plotting of Peter Weir’s daring fantasy or to amply praise Andrew Niccol’s dazzling screenplay and the amazing ensemble cast led by a tour-de-force central performance from Jim Carrey, which was unfairly overlooked by Oscar voters back in 1998.

The rubber-faced funny man demonstrates his dramatic range as an insurance claims adjuster, who has been the unwitting star of a 24-hour a day soap opera since birth. Everyone in his life – family, friends, lovers, wife – are actors, and his sleepy hometown of Seahaven is a giant film stage.

Focusing on the day when Truman finally twigs that his reality is a carefully crafted illusion controlled by an I-am-God director (Ed Harris), Weir’s film is one of those rare instances when originality and intelligence intersect perfectly with technical and artistic virtuosity. A towering achievement in every respect.

Sailing through the turbulence

Naples is known for its pizza. We went for the meatballs.