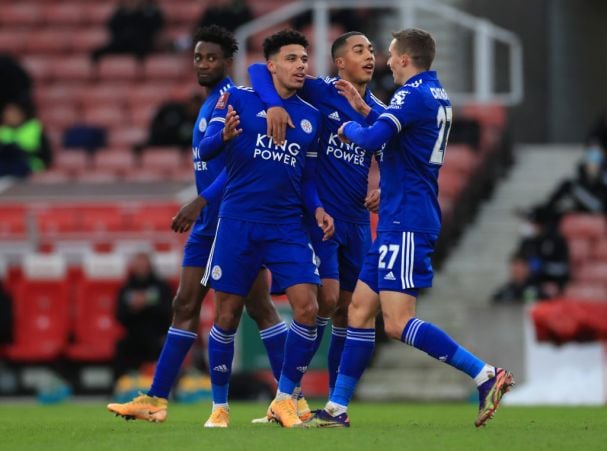 Leicester advanced into the FA Cup fourth round in comfortable fashion as the Premier League high-fliers beat Stoke 4-0 at the bet365 Stadium.

James Justin put the Foxes in front with a fine strike in the 34th minute, shortly after Sam Vokes had missed a good chance to give the Championship hosts the lead.

Marc Albrighton doubled the advantage with a 59th-minute finish, Ayoze Perez made it 3-0 with 11 minutes of normal time to go, and Harvey Barnes added a fourth two minutes later.

While Leicester were without Jamie Vardy and James Maddison, who had been nursing injuries, boss Brendan Rodgers named a strong team as that pair being replaced by Perez and Dennis Praet were the only changes from the 2-1 win at Newcastle.

Stoke manager Michael O’Neill made five alterations to his line-up from the 1-0 loss to Bournemouth, with skipper Ryan Shawcross being handed a first start of the season.

John Obi Mikel had the contest’s first attempt on goal when he sent a shot over the visitors’ bar in the fourth minute.

Five minutes later a Leicester break saw Barnes’ low strike bring a good save out of Joe Bursik, and Barnes then threatened again midway through the first half, firing a drive wide.

Vokes was presented with a great chance just before the half-hour mark, teed up by Shawcross’ header, but the Welshman could only send a hooked effort over.

And that miss was soon made to look even more glaring as Justin put Leicester ahead in superb style, collecting the ball from Praet on the left, dancing past two Stoke men as he cut inside, and hitting a delightful shot past Bursik and into the top corner from just outside the box.

Bursik then made another decent stop, keeping out a Barnes strike in the 38th minute.

Stoke’s James McClean miscued an effort early in the second half and Wilfred Ndidi struck wide at the other end before Leicester went 2-0 up through Albrighton.

McClean failed to cut out Youri Tielemans’ lofted pass and the ball found Albrighton, who cut inside Danny Batth and beat Bursik with a left-footed strike.

O’Neill made a treble substitution in the 65th minute, but the Potters were unable to muster little in the way of a fightback, and Leicester’s third subsequently arrived when the ball was worked from Praet to Timothy Castagne to Perez and the Spaniard side-footed past Bursik.

Rodgers’ men then swiftly added another when Justin crossed from the left, Shawcross intercepted and the loose ball was cracked in by Barnes.