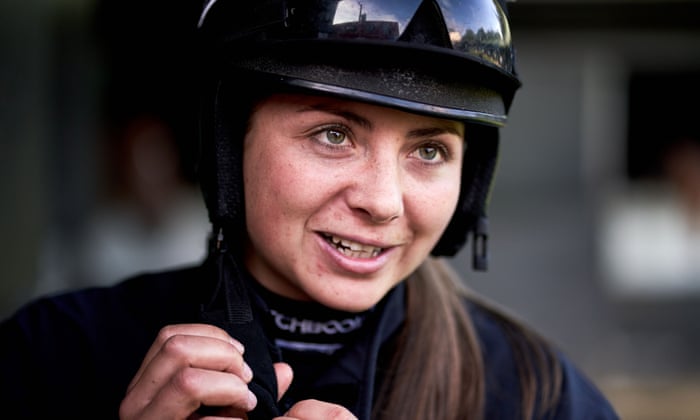 “I don’t get on with any character in my world as well as I do with him,” Bryony Frost says of Frodon, the horse she rode to a stunning victory in the King George VI Chase on Boxing Day. It was the most significant win for a female jockey in the history of British racing and Frost’s love of Frodon seems boundless as she considers if she will find a better partner than him on or off the track. “That’s 100%. I wonder if I ever will. He is a once-in-a-lifetime partner.”

Frost is the most charismatic jockey in jump racing and yet, while also becoming the most successful female National Hunt rider in British history after she recorded her 175th win, there is a tangled undertow to this story. We will soon skirt the unspoken jealousy and resentment that appears to stalk the 25-year-old Frost within racing. It might be because she is so ebullient, or simply because she is a young woman achieving so much in a sport that once belonged to hard men in the saddle, but Frost feels some hurt and disquiet amid the euphoria.

Her love of the sport has always been heard in the vivid way she talks about her most cherished horses. When she and Frodon won their first Grade One race together at the Cheltenham Festival in 2019, she plunged into a remarkable interview while still on his back and only minutes after their memorable victory in the Ryanair Chase.

“He is Pegasus, he has got wings,” Frost said of Frodon after a draining battle to win such an important race. “That minute where he got overtaken two out, most horses would quit,” she continued. “But no, he grabbed me by the hands and said: ‘Don’t you dare give up. I want this more than you, now come on! Where are you?’”

Frost patted Frodon on the neck in undisguised awe: “He’s unbelievable. I love you, mate!”

Twenty-two months later she laughs at the memory. “I got the mickey taken out of me for it,” she says of her gushing tribute before explaining her natural expressiveness. “It’s the way I’ve been brought up. The freedom I had as a kid, and my imagination, means I’m never scared to express my emotions. I wear them on my sleeve and no matter who has an opinion, I will battle very hard to make sure I stay that way because it’s me. I say it how I feel it.” 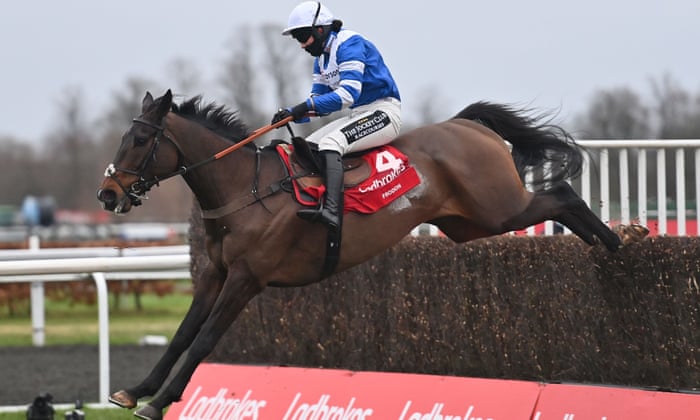 So how did winning the King George compare with those giddy moments at Cheltenham? “Good question,” Frost says. “You don’t think life can get much higher once you’ve won a Grade One at the Cheltenham Festival, but the King George is one of the three biggest races in racing: the Grand National, the Gold Cup and the King George. We ticked one of them off our list so it’s massive. I was astonished because I didn’t think I’d reach a highlight like the Ryanair [Chase], and then I was given an opportunity to go even higher.

“The world went mad afterwards. Even my uncle in Spain said we were on telly on their news that night. You’re mind-blown because you’re in your own little bubble. And then you take two steps back and see the rippling effect. It was pretty damn cool and it’s a good job I can go round in a circle a couple of times because I’m pretty hopeless at anything else.”

Frodon had been a 20-1 outsider but AP McCoy, the 20-times champion jockey, said afterwards it would not have mattered who rode him in the King George. Was Frost hurt by the comments of a racing giant? “Well, Ruby Walsh is a jockey I’ve followed since I was a little kid. Ruby is an inspiration and his balance upon a horse was incredible. He has that connection with [the trainer] Paul Nicholls’s yard and I’ve always watched Ruby and been lucky enough to have had a few conversations. To hear his comment about me getting the race tactically right was a massive feather in my cap because Ruby doesn’t miss a beat. So that was mega. I’ll take that instead of the other [McCoy comment].”

Frost is more troubled by the atmosphere within a small corner of racing. She alludes to the problems, with the implication that there is resentment towards her and young riders, while also saying it is not a subject she can discuss openly. “It’s a difficult topic at the minute, because there are ongoing things that need to be sorted out and there is protection that needs to be given to others. So at the moment I can’t go too much into it. But it’s something I’m going to be trying extremely hard to make better and move forward in a positive way. But at the minute my hands are tied as to how much I can go into such things.”

Is she wounded by such problems? “It’s OK,” she says with a small shrug. “There are always going to be a few people that frown. Opinions are opinions, not facts, and I think for our younger generation there are things that must be improved. It’s finding the support to become who you need to be. I will do my best to help everyone and give them all the time in the world I can. Other people give me time and I believe that should always be passed on.”

Despite our cryptic conversation is she confident such trouble will soon be resolved? “Yes. I’ll make sure that it does.”

When she is asked if the atmosphere in the weighing room, among her fellow jockeys, is difficult, Frost hesitates. “Yes. I struggle and I’ve got to make sure I don’t say anything too much. Sorry. I’m a bit stuck with this one.”

Does she try and block out the negativity and focus on improving as a jockey? “Yes. You just – it’s a growing curve, isn’t it? You have to keep working out how to get things right. I’m still in the process of that and always will be.” 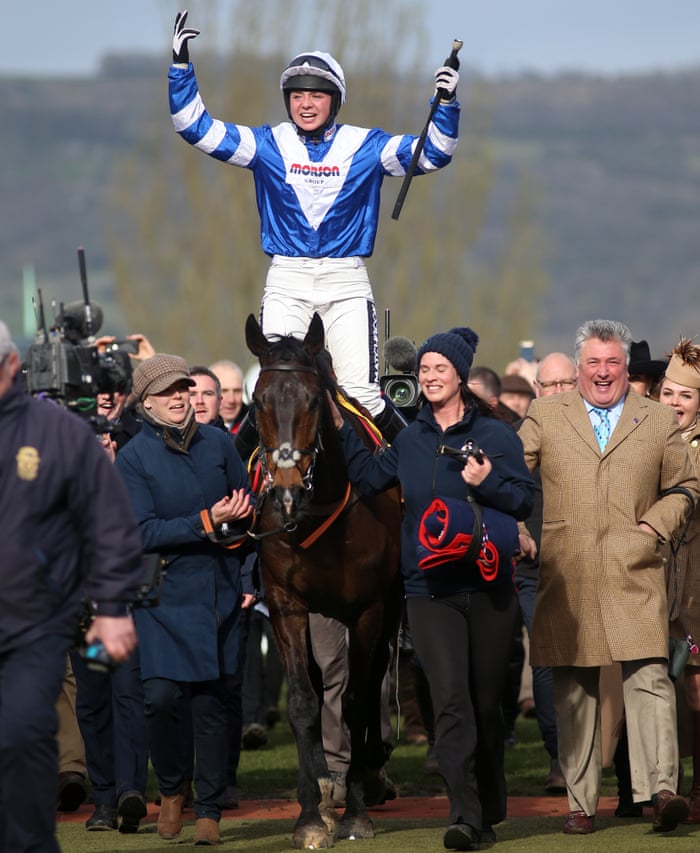 Frost is not circumspect for long. Even though we talk on a day when she is stuck at home rather than racing at Ludlow, where the meeting had been abandoned, Frost insists the elation of winning the King George has hardly subsided. “I’m undeterred by most things,” she says. “It’s my blissful ignorance probably. I did joke the other day that I got the map up to cloud nine when we won the King George and I refused to use it again. I lost myself up there and the longer I stay up there, the better. It’s probably always going to be sinking in for the rest of my life to realise such an achievement. It’s very hard to put into words.

“A lot of people say: ‘Being the first girl to win the King George is huge’ but, at the time, none of that goes through your head. There is a lot of disbelief and pride in your horse. What he’s done for my career, and where he’s taken me, is unbelievable. Doing it with Paul, [Nicholls] and being able to say your name is among those jockeys that have won the King George for the 12th time for him, is huge.”

Rather than just going round the track “in a circle a couple of times”, Frost shares a real empathy with her horses and an obvious aptitude for racing. She is also lit up by the joy she feels as a jockey. “Blissfulness is definitely a word I would use, being out there galloping, because in a frantic world it is the one place that allows me to slow my mind down and think nothing else than me and my partner. It’s bliss, it’s smooth, it’s effortless, especially with him. He is a timeless joy.

“His brain is so sharp that you have to concentrate 10 times harder than usual. The only thing I take charge of is giving him the breathers he needs to find his rhythm. Going down to the start, he was head down and playing up with me. I knew he was buzzing for it. The King George starts very close to the main stand so you could hear the music. He really is a character and his veins started coming up on his neck and he was ready to rock and roll. It was a brilliant feeling. Got to that first bend, you go through, and you’re in a position you love to be in. So let’s keep rolling, and we did.

“I needed to do a last breather for that final push up the home straight. That moment took a lot of nerve, trying to slow him down once again and hope that I don’t mess him up. We came to that apex, he’s so neat and perfect, and the kick and acceleration I felt going into the third last was there. That day there wasn’t anybody that could have beaten him.”

Frost stresses her debt to Nicholls, as well as Paul and Ruth Vogt, who own Frodon. But Nicholls himself has said it would be “a disadvantage – that’s the fact of it” if Frodon was not ridden by Frost. It should be remembered that jockeys as accomplished as Sam Twiston-Davies and Harry Cobden had regular opportunities on Frodon in the days before he blossomed under Frost. Frodon was also regarded as the third most fancied Nicholls horse in the King George, behind Clan Des Obeaux and Cyrname. But the dream partnership of Frost and Frodon looked utterly invincible.

Cheltenham suits Frodon far more, and so attention turns inevitably to the Gold Cup in March. If Frost could become the first female jockey to win the most prestigious of all races it would be one of the sporting stories of the year. Are they likely to take an almighty crack at the Gold Cup? “Yes. If I’m healthy, and he’s healthy, he goes straight to the Gold Cup. It’s always been on his radar even if he was a strong two-and-a-half mile horse. It’s not until now that he is starting to show that three miles isn’t stretching him like it used to. So we just need to get him in the best position to win the race. That’s our job. So the Gold Cup is calling. Cheltenham is calling.

“He loves Cheltenham and it’s a specialist course with the undulations and the turns and fences. I’ve never ridden in the Gold Cup, but I know it’s relentless. You need to be with a hardened warrior to go into battle in that race. I have that with him. And if you have a chance to have a crack at the best thing in life then, whatever anyone says, just go out there and give it a shot. I wouldn’t swap Frodon for anybody.”

FA Cup: Leicester ease into fourth round with victory over Stoke