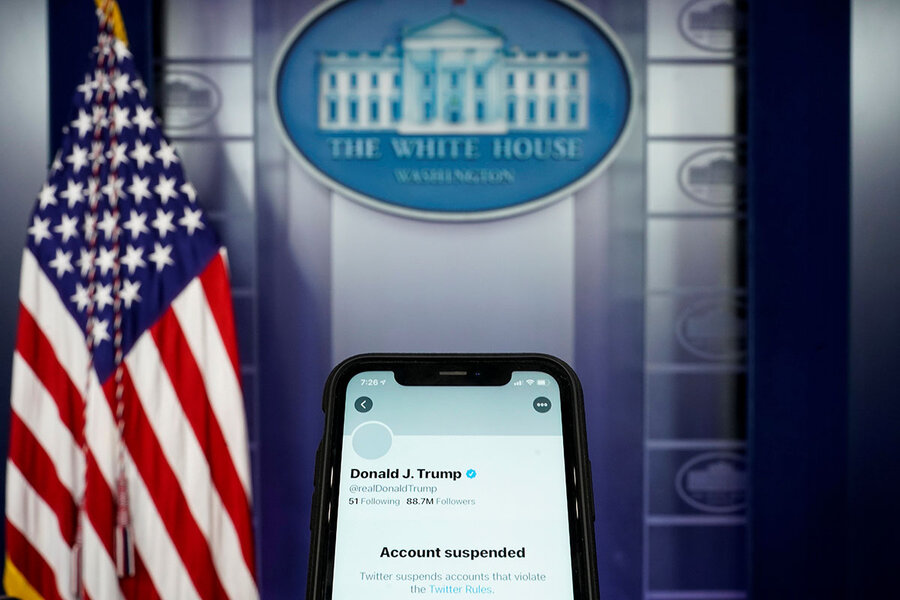 But aren’t they gagging the president by cutting him off from one of the world’s biggest social media platforms?

No. The president has unrivaled access to the media. Every broadcaster on the planet would leap at the chance to interview him. He has regularly called into programs on Fox News to chat live. And he has a White House press office with a press corps dedicated to reporting whatever he might say.

That’s not the same as Twitter. The press can filter him; on social media, Trump can say exactly what he wants.

That’s true. And the White House has a public website that could publish Mr. Trump’s words unfiltered. Mr. Trump has options – more than almost anyone else on the planet – to get his message out.

But what about all those other accounts being banned? They don’t have the same sort of options.

Let’s back up a moment to discuss what happened there. In addition to de-platforming Mr. Trump, multiple social media companies – Twitter being at the forefront – launched a campaign this weekend to ban users advocating misinformation and violence that led to the Jan. 6 riot, as well as users planning for a follow-up event on Jan. 17.

Twitter’s specific focus was on QAnon, the far-right conspiracy theory alleging a cabal of satanist pedophiles in government. Many accounts were banned, including several high-profile ones like that of former national security adviser Michael Flynn and Trump recount lawyer Sidney Powell. Many conservative figures complained that their follower numbers dropped by the thousands over the weekend, and accused Twitter of censoring conservatives broadly.

Again, not in any legal way. Twitter can kick out whomever it wants to. And all of these users already agreed that Twitter could kick them out. If you’re a Twitter user, you have to.

Part of signing up for Twitter includes agreeing to its terms of service, which lay out a range of allowed and barred behaviors. You almost certainly didn’t look at them; most people don’t. But in a court of law, they would be considered effectual (so long as they’re reasonable – a term that included a promise to pay Twitter a million dollars wouldn’t fly). So all those people being thrown off Twitter already consented to Twitter’s decision, under the law.

Yes, it is. Twitter, among others, has been very inconsistent in application of its rules, particularly regarding misinformation. Mr. Trump, for example, has had many tweets marked and/or hidden for misinformation, while it was only this weekend that Twitter deleted a Chinese embassy tweet that claimed Uyghur women were being “emancipated” by the ongoing internment of the Uyghur minority in Xinjiang.

Still, Mike Masnick, founder of the tech/legal blog Techdirt, writes that a couple of years ago, his team “took a room full of content moderation experts and asked them to make content moderation decisions on eight cases,” and they “couldn’t get these experts to agree on anything.” So while Twitter’s inconsistency is frustrating, it’s par for the course.

What about Parler? It has minimal moderation, and now Big Tech is shutting it down.

Let’s discuss what happened to Parler, as it’s caught up in a different set of issues, mostly dealings between corporations.

Posts on Parler have shown that it was a communications nexus for planning around the Capitol invasion on Jan. 6. Several users have also made what appear to be violent threats against members of the government, including House Speaker Nancy Pelosi and Vice President Mike Pence, who were both inside the Capitol during the siege.

On Jan. 8, Apple warned Parler that if it didn’t institute a moderation policy to deal with violent threats within 24 hours, the app would be banned from its App Store. Google suspended the Parler app from the Google Play store shortly thereafter. Though Parler did delete some posts by Trump-connected lawyer Lin Wood about Mr. Pence, Apple removed the app from its store on Jan. 9. That same day, Amazon Web Services announced it would stop hosting Parler, effectively shutting the social media service down until it finds a new host.

Why isn’t that censorship?

This is all about private entities severing contracts with one another. Parler and Apple had a contract that Apple chose to end – the same with Google, the same with Amazon. In fact, it’s only Amazon’s termination that has affected the inner workings of Parler. The two store bans did not reach the service itself – Parler could have offered other means to users to access its services, perhaps a web interface, as Twitter does.

But let’s put that aside for a moment and look at what Parler’s corporate partners were specifically criticizing. Amazon wrote to Parler that “we cannot provide services to a customer that is unable to effectively identify and remove content that encourages or incites violence against others.” Apple and Google’s complaints were similar, and for good reason. Incitement to violence is not protected speech under the First Amendment. Parler users who were engaged in such speech were not exercising their rights.

Admittedly, the line between hyperbole and incitement is blurry. Parler would need moderators to determine which side of the line users fall on. But that just goes to the point Apple raised with its initial 24-hour warning.

Yes. While everything that has happened is legally sound, the social media upheaval, particularly Parler’s deactivation, raises societal concerns.

There’s a reason that people have drawn the comparison between social media and the town square – it’s a 24-hour version of the “market place of ideas” coined by Justice William O. Douglas. The launch of Parler was the start of a major fracturing of that marketplace into ideological camps, and its involuntary shuttering threatens to deepen the fracture.

Parler’s CEO, John Matze, has said the service will relaunch once it finds new hosting services. And it will undoubtedly find ways to circumvent the bans by Google and Apple to reach its users once again. But the new Parler will likely end up more isolated from the rest of the social media ecosystem, with a more embittered user base. That may only exacerbate problems that social media companies cannot solve.

Before becoming Europe editor at the Monitor, Mr. Bright was the research attorney for the Digital Media Law Project at the Berkman Center for Internet and Society at Harvard Law School.

WhatsApp to stop working on millions of phones from 1 January

How to get the most out of your new Android phone

CES 2021: What to watch for at all-digital event