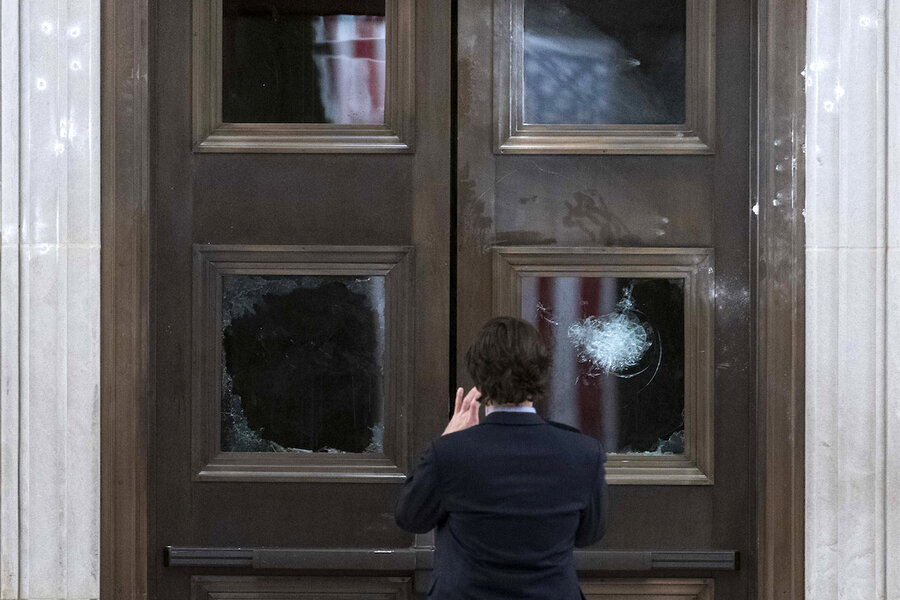 A fifth person, a police officer, has died from injuries incurred when President Donald Trump’s supporters stormed the United States Capitol, as the fallout from the violent siege forces hard questions about the defeated president’s remaining days in office.

Meanwhile, a steady stream of Trump administration officials are resigning in protest against the insurrection, as others wrestling with the stay-or-go question conclude that they owe it to the public to see things through to the end.

After initial denial, Mr. Trump finally acknowledged on Thursday the grim reality facing the nation after the orderly transition of presidential power was disrupted, releasing a video from the White House condemning the violence carried out in his name a day earlier. Then, for the first time on camera, he admitted his presidency would soon end – though he declined to mention President-elect Joe Biden by name or explicitly state he had lost.

“A new administration will be inaugurated on Jan. 20,” Mr. Trump said in the video. “My focus now turns to ensuring a smooth, orderly and seamless transition of power. This moment calls for healing and reconciliation.”

The Capitol Police said in a statement that Officer Brian D. Sicknick was injured “while physically engaging with protesters” during the Wednesday riot.

During the melee, Mr. Sicknick was hit in the head with a fire extinguisher, two law enforcement officials said. The officials could not discuss the ongoing investigation publicly and spoke to The Associated Press on condition of anonymity.

The rampage that has shocked the world and left the country on edge forced the resignations of three top Capitol security officials over the failure to stop the breach. It led lawmakers to demand a review of operations and an FBI briefing over what they called a “terrorist attack.” And it is prompting a broader reckoning over Mr. Trump’s tenure in office and what comes next for a torn nation.

Meanwhile, with less than two weeks left before Mr. Biden’s inauguration, Mr. Trump’s education and transportation secretaries, his acting chairman of the White House Council of Economic Advisers, and deputy national security adviser are among at least nine senior administration officials who have announced their resignations since Wednesday’s attack.

Serving under Mr. Trump has been a test for many aides who have abided some of the president’s most provocative actions, including his embrace of authoritarians, a habit of coarsely belittling political adversaries, and the ease and frequency with which he’s deployed falsehoods for personal benefit.

But Mr. Trump’s behavior in a few harrowing hours on Wednesday – first by egging on his supporters to demand Congress subvert the election and later declining to condemn the day’s violence – was a line too far for several high-profile officials serving the president.

Some of Mr. Trump’s critics don’t give those in the early-exit caucus much credit for walking away from their jobs with less than two weeks left in the administration, seeing it as little more than a face-saving effort.

“Nobody is fooled by these last-second, come-to-Jesus conversions,” said Rick Wilson, co-founder of the Lincoln Project, a group of Republicans fiercely critical of Mr. Trump.

The president’s video Thursday – which was released upon his return to Twitter after his account was restored – was a complete reversal from the one he put out just 24 hours earlier in which he said to the violent mob: “We love you. You’re very special.” His refusal to condemn the violence sparked a firestorm of criticism and, in the new video, he at last denounced the demonstrators’ “lawlessness and mayhem.”

Aides said the video was also meant to slow the mass exodus of staffers and ward off potential legal trouble for Mr. Trump once he leaves office; White House counsel Pat Cipollone has repeatedly warned the president that he could be deemed responsible for inciting Wednesday’s violence.

Lawmakers from both parties pledged to investigate and questioned whether a lack of preparedness by law enforcement allowed a mob to occupy and vandalize the building. The Pentagon and Justice Department had been rebuffed when they offered assistance.

Education Secretary Betsy DeVos and Transportation Secretary Elaine Chao on Thursday became the highest-ranking administration officials to resign over the pro-Trump insurrection. In a statement, Ms. Chao, who is married to Senate GOP leader Mitch McConnell, said the violent attack on the Capitol “has deeply troubled me in a way that I simply cannot set aside.”

Ms. DeVos, in her resignation letter, cast blame on the president for inciting the mob. “There is no mistaking the impact your rhetoric had on the situation, and it is the inflection point for me,” she wrote.

Mick Mulvaney, the U.S. special envoy to Northern Ireland and a former White House chief of staff, said there was a lot of “soul searching” going on at the White House as he announced his own resignation from the administration.

“A lot of folks are wondering if I do resign today, who’s going to take my place and will it make it better or will it make it worse,” Mulvaney said in a CNBC interview.

Lawmakers on both sides of the aisle said they hoped Trump would be surrounded by capable advisers in the final days of his time in office.

Sen. Joe Manchin, a West Virginia Democrat, on Thursday urged “the good men and women honorably serving at all levels of the federal government to please stay at their post for the protection of our democracy.”