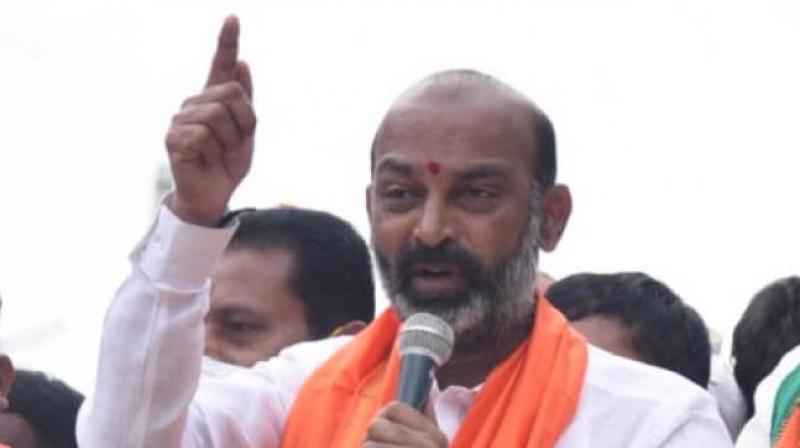 Sanjay charged that Puvvada Ajay has nothing to do with separate Telangana movement and became minister after spending crores of rupees. He sought to point out that Ajay was in YSRCP when Telangana movement was on. “So far, he has changed four parties like a chameleon,” he remarked, taking objection to Ajay’s criticism of the Bharatiya Janata Party.

The state BJP president accused the minister of encroaching on 3.5 acre Nagarjunasagar Project canal land in survey numbers of 93 and 94, valued Rs. 70 crore in the open market, and committing malpractices in the medical college that Ajay is running. He underlined that while roads in Khammam town are at most 60 feet, those along the minister’s Mamata Medical College are of 100 feet.
Sanjay claimed that all development works going on in Khammam district are being taken up with funds being received from the central government.

He maintained that the results of Dubbaka and GHMC polls will repeat in Khammam Municipal Corporation (KMC) too. “Saffron flag will be hoisted atop the KMC,” he declared.

The TS BJP chief had visited Khammam to ready his party activists for the ensuing Khammam civic body elections. He interacted with people from various sections of the society, including businessmen, academicians, teachers and professionals in the VVC complex. He also addressed a meeting of party activists on forming booth-level committees.