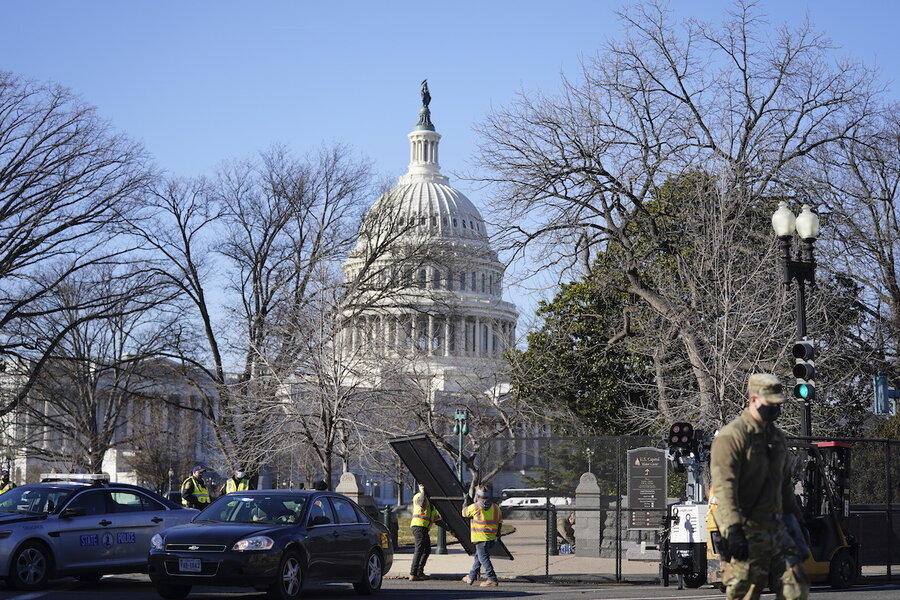 The violent insurrection at the United States Capitol is intensifying scrutiny over security at the upcoming inauguration ceremony for President-elect Joe Biden that already has been reshaped by the pandemic and the news that President Donald Trump will not attend.

Mr. Biden and Vice President-elect Kamala Harris will take the oath of office from the Capitol’s West Front, one of the locations where a violent mob overpowered police and stormed the building. They also scaled and occupied the scaffolding and bleachers in place for the ceremonies.

Plans for the Jan. 20 inauguration were already scaled back because of the coronavirus. But the brazen attack raises new questions about preparedness for the event that will welcome the new administration after a bitter election.

The congressional leaders responsible for coordinating the inauguration insisted Thursday night that events will move forward.

“Yesterday was a sad and solemn day for our country,” said Sens. Roy Blunt, R-Mo., and Amy Klobuchar, D-Minn. “The outrageous attack on the Capitol, however, will not stop us from affirming to Americans – and the world – that our democracy endures.”

Mr. Trump said Friday he won’t attend President-elect Joe Biden’s inauguration on Jan. 20, undercutting his message a day earlier that he would work to ensure a “smooth, orderly and seamless transition of power” to his successor.

Mr. Trump offered no clues for how he would spent his final hours in office, and will be the first incumbent president in 152 years to skip his successor’s swearing-in. The outgoing president has skipped the incoming president’s swearing-in only three times in U.S. history, the last being Andrew Johnson. Traditionally, the incoming and outgoing presidents ride to the U.S. Capitol together for the ceremony, as a symbol of the nation’s peaceful transition. Vice President Mike Pence plans to attend the ceremony.

Roughly 6,200 members of the National Guard from six states – Virginia, Pennsylvania, New York, New Jersey, Delaware, and Maryland – will help support the Capitol Police and other law enforcement in Washington for the next 30 days. Inauguration Day road closures may be altered.

Crews also erected on the Capitol grounds tall, black metal fences designed to be impossible to climb. Similar structures have previously been used around the White House and in other cities that faced prolonged demonstrations.

Such barriers would have gone up in anyway in coming days, however, because the inauguration is a National Special Security Event overseen by the Secret Service and scores of other federal agencies, including the Defense Department, which helps lead counterterrorism efforts associated with the event. That’s the same level of security provided during political party conventions or when a dignitary lies in state at the Capitol – but not during a normal congressional session like when rioters breached the building.

“The safety and security of all those participating in the 59th Presidential Inauguration is of the utmost importance,” the Secret Service said in a statement Thursday. “For well over a year, the U.S. Secret Service, along with our NSSE partners, has been working tirelessly to anticipate and prepare for all possible contingencies at every level to ensure a safe and secure Inauguration Day.”

Authorities will have the same military and civilian footprint to handle a crowd of more than a million people for an event expected to draw a fraction of that because of restrictions to combat the coronavirus, according to a person familiar with the security planning.

Those who have worked on previous inaugurations said that while this year’s events will look different, the tradition of passing power from one administration to another will continue.

“Is it as impactful? You don’t have a photo of a million people lined up, so you don’t have that sort of powerful image. But I think you will still have the feel there,” said Bill Daley, a former commerce secretary and White House chief of staff who helped organize President Barack Obama’s first inauguration in 2009. “The aura of change will be there.”

Mr. Trump hasn’t made that easy. He has falsely argued that the election was stolen, a claim that has been rejected by fellow Republicans in critical swing states and his recently departed attorney general. His many legal challenges were roundly dismissed as meritless, including by conservative judges he appointed.

A Trump rally in front of the White House on Wednesday helped rile up the mob that later stormed the Capitol.

Former President Jimmy Carter has announced he wouldn’t be there, the first inauguration the 96-year-old will miss since he himself was sworn into office in 1977. He has mostly stayed home amid the pandemic. Former Presidents George W. Bush and Bill Clinton will be on hand.

Inauguration organizers had already urged supporters not to come to Washington in person because of the pandemic. Viewing stands built to hold crowds of onlookers in front of the White House were recently dismantled.

There also won’t be the traditional inauguration luncheon and the parade will be virtual, similar to what the Democratic Party did during its all-online convention in August.

The inaugural committee has announced that Mr. Biden would receive an official escort, with representatives from every military branch, for a block before arriving to the White House from the Capitol.

The presidential motorcade usually rolls the mile-plus journey with the new president and first lady walking part of the way and thousands of cheering supporters lining the streets. While final details are still being worked out, it’s unclear any of that will occur this time.

Whatever happens, it’ll be a far cry from Obama’s 2009 inauguration, when organizers opened the full length of the National Mall – which extends all the way to the Lincoln Memorial – to accommodate massive crowds. Security was also a concern then.

The night before, Michael Chertoff, President George W. Bush’s secretary of homeland security, informed Mr. Obama’s team of credible intelligence indicating that four still-at-large Somali men who were thought to be coming over the U.S.-Canada border might be planning a terrorist attack on the inauguration ceremony.

In his book, “A Promised Land,” Mr. Obama writes that “to be safe, we ran through various contingencies with Chertoff and his team.” Mr. Obama had an adviser “draft evacuation instructions that I’d give the crowd if an attack took place while I was onstage.” He later noted that he kept those instructions in his breast pocket while giving his speech and that he was “relieved” that nothing happened and he didn’t have to use them.

Jim Bendat, an inaugural historian and author of the book, “Democracy’s Big Day,” noted that the outgoing and the incoming presidents usually meet at the White House and chat before joining a procession to the Capitol for the swearing-in ceremonies. Mr. Trump may not invite Mr. Biden to the White House and if he skips the inauguration as announced, Mr. Bendat said those actions would amount to “an assault on our Democracy” akin to Wednesday’s unrest.

“Those are very symbolic moments that really open our eyes,” Mr. Bendat said of the two presidents meeting cordially. “The world watches those moments because it’s something that doesn’t occur in most countries.”

Still, Mr. Daley said Mr. Biden, who first ran for president in 1988, may be uniquely qualified for an inauguration that’s mostly void of traditional pomp and circumstance.

“I think it’s less needed for someone who’s been around as long as he’s been. And his whole thrust has been, ‘I can hit the ground running because I’ve been there, I know this stuff,’” Mr. Daley said. “I don’t think he needs to stand there on the podium celebrating himself very long.”

What Mike Pence should learn from Judas