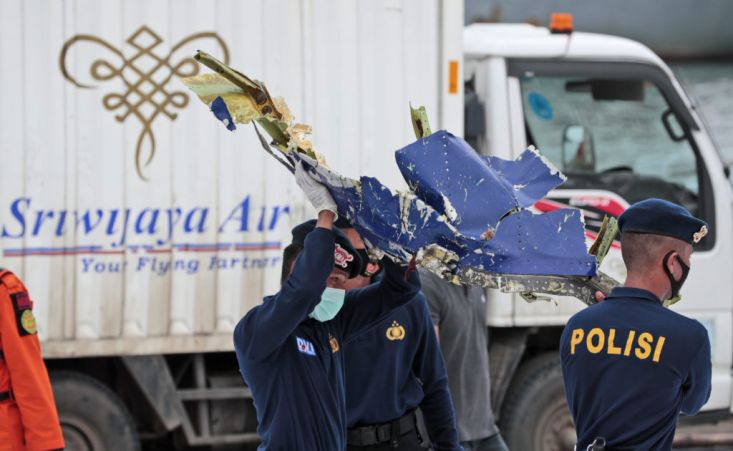 Indonesian navy divers are still searching through plane debris and seabed mud looking for the black boxes of a Sriwijaya Air jet that nosedived into the Java Sea over the weekend with 62 people aboard.

A navy ship earlier picked up intense pings being emitted from the boxes containing the cockpit voice and flight data recorders of the Boeing 737-500 that went down on Saturday minutes after taking off from the capital, Jakarta, in heavy rain.

The divers were using high-tech “ping locator” equipment to further narrow their hunt beneath 20 metres (65 feet) of seabed mud but the black boxes are buried under a bulk of sharp objects in the wreckage, Navy chief admiral Yudo Margono said.

He said removing those obstacles was slowing efforts to reach the devices. A remote-operated vehicle was sent to the black box location, and Mr Margono said at least 160 divers will be deployed on Tuesday to boost the search for the black boxes.

More than 3,600 rescue personnel, 13 helicopters, 54 large ships and 20 small boats have joined the search that already has found parts of the plane and human remains in the water at a depth of 23 metres (75 feet).

So far, searchers have sent 74 body bags containing human remains to police identification experts who on Monday said they had identified their first victim, a 29-year-old man, Okky Bisma, a flight attendant.

Anguished family members have been providing samples for DNA tests and police say results are expected within four to eight days.

National Police spokesman Rusdi Hartono said about 53 samples for DNA testing have been collected but more are still needed, especially from parents and children of victims.

The information contained in the black boxes will be key to learning what downed Flight 182.

The devices detached from the tail of the aircraft when it crashed, and the search for them is concentrated between Lancang and Laki islands in the Thousand Island chain just north of Jakarta.

When found, the devices will be handed to the National Transportation Safety Committee (NTSC) overseeing the crash investigation.

Indonesia’s NTSC said Singapore’s Transport Safety Investigation Bureau will help in searching for the black boxes and the United States’ National Transportation Safety Board will join in investigating the crash.

The NTSC chairman, Soerjanto Tjahjono, ruled out a possible midair breakup after seeing the condition of the wreckage found by searchers.

He said the jet was intact until it struck the water, concentrating the debris field, rather than spreading it out over a large area as would be seen with a midair event.