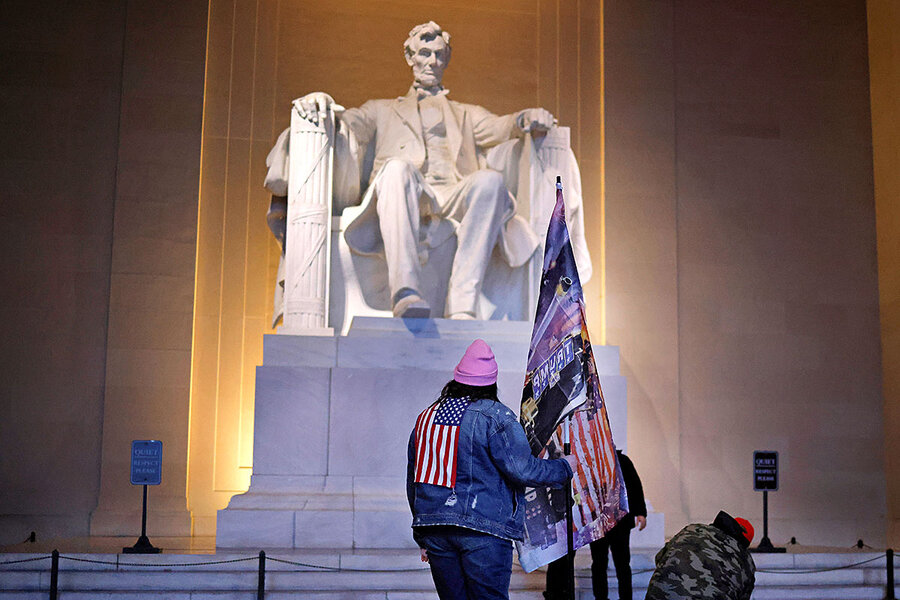 The Republican Party of Abraham Lincoln, Dwight Eisenhower, and Ronald Reagan is no more. In its place, a new GOP is emerging.

But the journey has only just begun, following the extraordinary events of this week – and the preceding weeks that set the stage – which have cleaved the party in ways rarely seen in its 167-year history.

In retrospect, the violent mob that overtook the Capitol on Wednesday can be seen as the logical climax of President Donald Trump’s two-month campaign to sow grievance among his followers, after repeated claims the election was stolen and a refusal to concede his Nov. 3 election defeat.

What’s more, the Republicans’ loss of both Georgia Senate seats in Tuesday’s runoff, effectively handing Democrats the chamber’s majority – and therefore control of both the legislative and executive branches – has dealt yet another blow to party fortunes. Senate Republicans fear that Mr. Trump’s claims of election fraud on Nov. 3 may have depressed turnout on Jan. 5. Party strategists say they were out-organized by the Democrats.

But the Republican Party is far from dead; it’s evolving, as parties do. And while President Trump’s departure from office in 12 days will resolve nothing for the GOP’s future, it represents the next step in that evolution.

In recent days, major party figures – including Vice President Mike Pence and Senate Majority Leader Mitch McConnell – have defied Mr. Trump’s wishes and accepted Joe Biden’s presidential victory. But the fact remains that among many in the party, perhaps even a majority, Mr. Trump and his brand remain compelling.

“There’s obviously been, for now, a backlash against Donald Trump for inspiring the mob that attacked Congress,” says Terry Moe, a political scientist at Stanford University in California. “But the fact of the matter is, long term, Trump’s populist base is still there. It’s still angry. It’s big. And it’s politically powerful within the Republican Party.”

An analysis by Amy Walter of the nonpartisan Cook Political Report shows just how large that segment of the party has become. For years, she writes, the GOP was a “three-legged stool consisting of religious conservatives, small-government types, and military hawks.” Now, Ms. Walter says, add a fourth: the Trump wing.

Poll data, in fact, suggest the Trump wing represents a majority of the party. The final NBC-Wall Street Journal poll before Election Day showed 54% of Republicans identifying with Mr. Trump versus 38% identifying as a supporter of the GOP.

That was before the Jan. 6 melee in the Capitol, which interrupted the certification of Mr. Biden’s victory and left five people dead, shaking the nation to its core. Some Republicans have since abandoned Mr. Trump, and are calling on him to resign. On Friday, he tweeted that he would not attend the inauguration of President-elect Biden.

His former chief of staff and Homeland Security secretary, John Kelly, said Thursday that the Cabinet should meet to discuss removing the president via the 25th Amendment to the Constitution. If he were still in the Cabinet, he said, he would vote for removal.

But within Congress, even after the attack on the Capitol, 147 GOP lawmakers still objected to the election results. On Thursday, in a phone call to the Republican National Committee’s winter meeting in Florida, Mr. Trump was greeted with applause. Trump loyalist Ronna McDaniel won reelection Friday as party chair without opposition.

Democrats, meanwhile, have urged use of the 25th Amendment and threatened a second impeachment. On Friday, Speaker Nancy Pelosi said the House will move to introduce articles of impeachment against Mr. Trump on Monday, if he doesn’t resign “immediately.”

In response, House Republican leader Kevin McCarthy, who voted to object to the election results on Wednesday, called for national unity. “Impeaching the President with just 12 days left in his term will only divide our country more,” he said in a statement.

Earlier, Ms. Pelosi asked the nation’s top military officer to deprive the president of access to the nuclear codes, calling him “unhinged.”

“The future of the party lies in something Donald Trump put his finger on, and that is to be a working-class, blue-collar-focused outsider party that stands up to China and stands for religious freedom and individual freedom, without a hint of violence,” Mr. Fleischer says.

He doesn’t think that’s a hard formula to follow. If they do, “Republicans can regain much of what they lost in the suburbs and among college-educated voters.”

Even on his way out the door, Mr. Trump is still pushing his immigration message, reportedly planning a trip to the U.S.-Mexico border before leaving office Jan. 20.

In the post-Trump era, GOP talking points will also focus on “freedom, cancel culture, and the undermining of American exceptionalism and capitalism,” the Republican strategist says.

Still, the shocking images from the Capitol on Wednesday – broadcast globally, in an embarrassing blow to America’s identity as a beacon of peaceful democratic rule – will not fade from memory anytime soon.

To many mainstream Republicans, who stuck with Mr. Trump as best they could despite his stylistic excesses, Wednesday may have been a bridge too far. This casts doubt on his potential for a comeback in 2024, if he attempts one.

“But no Republican I know would say, ‘We can put up with a little insurrection.’ People did put up with certain things. They put up with crassness, rudeness. But until [Wednesday], I don’t think he went so out of bounds as it relates to our constitutional norms that it fully tripped the wires of ‘this isn’t right.’”

What ‘Blue Lives Matter’ was always about