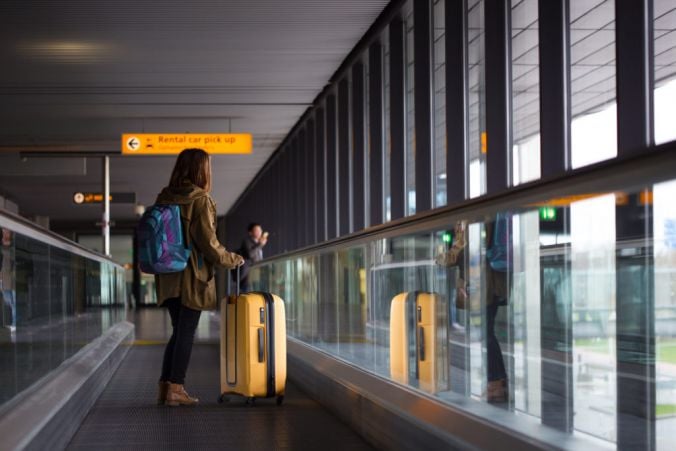 woman with suitcase and backpack on airport travelator

As if we needed another reminder of how many holidays were cancelled last year, Heathrow has revealed it lost 58.8 million passengers in 2020 – a huge 72.7% drop, compared to the previous year.

Air travel – and airports in particular – used to be something we grumbled about as we set off on holiday, but that was pre-Covid. Now even the thought of facing a flight delay or negotiating crowds of suitcase-wielding tourists fills us with longing for the day we can do all that again.

For nervous travellers, arriving two hours before take-off is not enough. You’ve got to leave plenty of buffer time in case of traffic, transport delays or any other unforeseen emergencies.

You always ended up with way too much time on your hands at the airport – now you’d love to while away the hours staring out at all those planes on the runway and getting excited about your impending vacation.

2. The price of food and drink

‘Whaaaat?!’ you often found yourself exclaiming when you clapped eyes on the prices of crisps, sweets, sandwiches and water. But you bought it all anyway.

Normal societal rules about meal times do not apply at airports. Want Wagamama for breakfast? Go for it.

That massive bag of sweets was absolutely necessary to help with ear-popping on the plane, and that giant burger with chips was nothing to feel guilt about because it’s a well-known fact that calories do not count when you’re in an airport.

Eco warrior (and money-saver) that you are, you always brought an empty water bottle so you could take it safely through security then fill it up at a water fountain.

Most of the time you wished you’d brought a divining rod instead, because locating a water fountain often involved a Challenge Anneka-level hunt through the terminal. And that, you now realise, was actually fun.

You used to despise the noisy stag and hen parties that littered the departure lounge throughout summer, the families with screeching children who wouldn’t sit still and the haughty businesspeople who yapped non-stop on their mobiles.

What you wouldn’t give for a couple of hours of quality airport people-watching now.

7. Shopping for the one thing you forgot

There was always something. A phone charger, a neck pillow, sunscreen…every time you jetted off on holiday you forgot one essential item and were forced to scour the airport for in search of said item, with the niggling worry you would miss your plane adding a spike of adrenaline.

8. The long walk to the gate

Like Ikea, but with perfume and chocolate instead of furniture, duty free shops in airports are designed to make you walk the longest route past as many shelves as possible in the hope you’ll succumb to their charms before you get to your gate.

Previously, the product placement would drive you mad. Now you can’t wait to peruse the Toblerones and spritz yourself with 20 different fragrances.

9. Shenanigans at the gate

It was always a toss-up: should you wait until just about everyone else has boarded before sauntering to the gate, or competitively queue to ensure you’re first on the plane?

Somehow you never made the right decision and ended up with a dud seat or, worse, being called over the PA and almost missing your flight.

Picking up newspapers and magazines you would never normally read just because they were free was a much-loved pre-boarding ritual.

Glancing up at the departures board to see that your flight has been delayed was always a groan-inducing moment. But now, when your holiday has been delayed by months, a few hours would seem like nothing – and there’s so much more to do when you’re hanging around an airport, compared to your living room.

Sex And The City is coming back: The style lessons we learned from the original series

5 reasons to finally give up make-up wipes