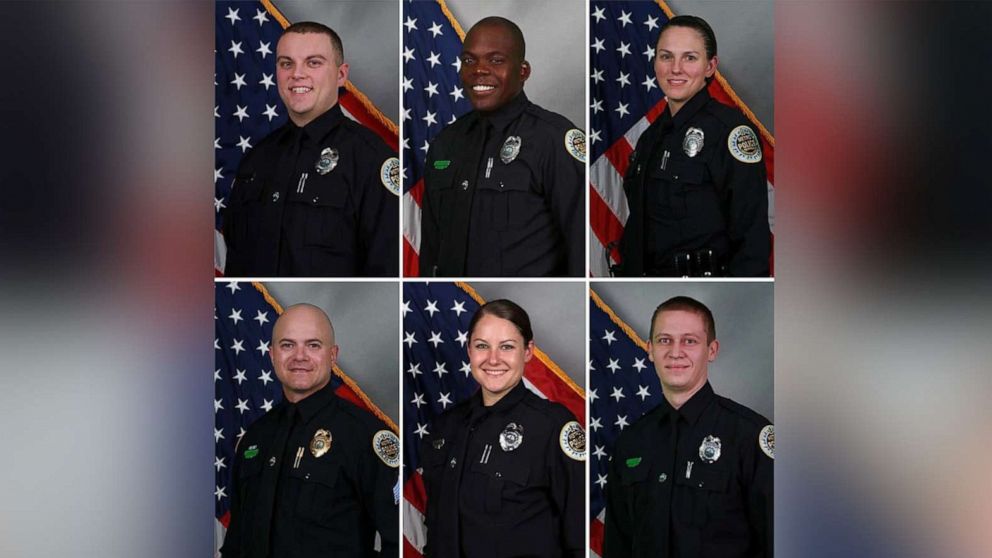 The Tennessee Titans honored the six first responders responsible for safely evacuating residents in downtown Nashville prior to the Christmas Day bombing.

Officers Brenna Hosey, Tyler Luellen, Michael Sipos, Amanda Topping, James Wells and Sergeant Timothy Miller were in attendance at Sunday’s NFL playoff game against the Baltimore Ravens and plunged the Titans Sword of Honor to mark the countdown to kickoff and were recognized as the game’s honorary 12th Titans, according to the Tennessee Titans.

“While we can never thank these officers enough for their heroic acts, it is an absolute privilege to have the opportunity to honor them at the game on Sunday,” said Titans president and CEO Burke Nihill. “We are grateful for their service to our community and appreciate that we’ll have them on site to support the team.”

Nashville police officers were called to downtown Nashville early on Christmas morning when they discovered an RV playing a recording saying a potential bomb would detonate within 15 minutes.

The officers immediately began working to evacuate nearby buildings when the RV exploded at approximately 6:30 a.m, blowing out windows of nearby buildings and causing extensive and structural damage to dozens of buildings in the surrounding area.

Authorities found human remains among the debris of the explosion and investigators eventually determined that they belonged to the RV owner who was later identified as 63-year-old Anthony Quinn Warner of Antioch, Tennessee, a suburb of Nashville.

The Nashville police officers were hailed as heroes at a press conference a couple of days later.

On Sunday, however, the officers will be lauded on the national stage.

“To be able to stand at the stadium with [my fellow officers] and receive this honor together is amazing,” said Officer Wells. “[Our response on Christmas Day] was a total team effort. It was not what one individual did or said, it was about all of us coming together to protect our community, and keep our community safe and keep each other safe.”

The Tennessee Titans said that their players will continue to wear the “615 Strong” helmet decal in this weekend’s game, honoring Nashville’s resilience and the six officers involved.

The Tennessee Titans (11-5) are the fourth seed in the AFC and will take on the fifth seeded Baltimore Ravens (11-5) for the right to move onto the divisional round of the 2021 NFL playoffs.

Why calls grow for President Trump’s resignation or impeachment