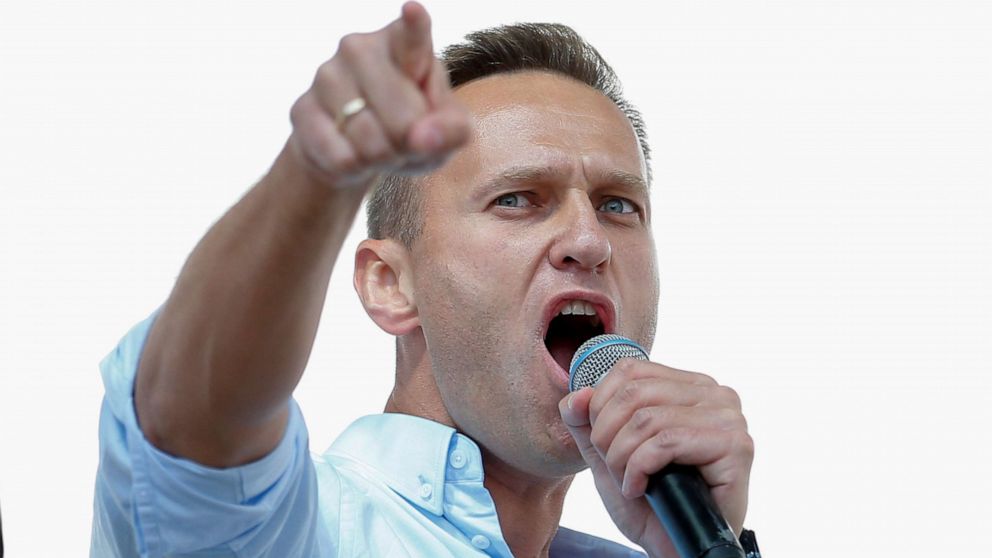 The Russian opposition leader Alexey Navalny has said he will return to Russia this week for what could be a dramatic homecoming following his poisoning with a nerve agent this summer.

Navalny has been in Germany since August where he was treated for the poisoning and had pledged to return home despite the attempt to kill him and recent threats from Russian authorities to jail him.

In a social media post on Wednesday he wrote he has a bought a plane ticket to arrive in Moscow this Sunday.

“The question ‘to return or not’ never stood before me. Sunday, January 17, I will return home on the Pobeda flight. Come meet me,” Navalny wrote on Twitter Wednesday, referring to a flight with a budget Russian airline.

Navalny spent weeks recovering in a Berlin hospital where he was airlifted after suddenly falling critically ill on a flight in Siberia in August.

A German military lab later found he had been poisoned with a Novichok nerve agent, a chemical weapon developed by the Soviet Union and used in a 2018 assassination attempt against the Russian former double agent Sergey Skripal in the U.K.

Navalny’s poisoning has since been linked to a hit squad from Russia’s domestic intelligence agency, the Federal Security Service or FSB.

Navalny is Russia’s most prominent opposition leader and has long been a thorn in the Kremlin’s side, publishing high-profile investigations into alleged corruption among powerful officials and building a grass-roots protest movement.

Almost since the moment he emerged from a coma caused by the poisoning, Navalny pledged the assassination attempt would not dissuade him from going back to Russia, prompting speculation on whether the Kremlin might seek to stop him.

In recent weeks, Russian authorities have abruptly moved to change a previous suspended jail sentence against Navalny to real prison time and opened a new criminal case against him that carries a maximum ten year prison sentence.

Navalny has said the cases are politically motivated and are intended to deter him from returning to Russia and to force him into exile now that the effort to kill him has failed.

On Tuesday, it emerged Russia’s prison service has requested a Russian judge to jail Navalny in absentia for allegedly violating the terms of a suspended sentence handed to him years earlier.

Navalny was given the suspended sentence in 2014 in a trial for fraud that he said was politically motivated and that the European Court of Human Rights later ruled had been unjust. The ruling at the time was widely interpreted by independent observers as an attempt to block Navalny’s political activities and prevent him from running for office.

Russian prosecutors last month also announced they were bringing “large-scale fraud” charges against Navalny and some of his colleagues for allegedly embezzling donations from their activist organizations.

The moves raise the prospect that Navalny could face arrest once he returns to Russia.

The Kremlin’s spokesman Dmitry Peskov has said there are no obstacles to Navalny returning to Russia and told reporters to address questions about his sentencing to the penitentiary service.

Navalny has faced a campaign of physical and legal harassment over the years, targeted by police as well as pro-Kremlin activists. He has blamed his poisoning directly on president Vladimir Putin.

Putin and Russian officials have denied any involvement.

But an investigation by the independent group Bellingcat last month presented evidence identifying several members of an alleged FSB hit squad that had followed Navalny since at least 2017 and were present in the city of Tomsk when he was poisoned.

Navalny himself later called one of the alleged agents and recorded him apparently unwittingly admitting to the plot to kill him.

Speaking to an audience last month Putin did not dispute the FSB had followed Navalny but denied they would have poisoned him, saying if they had “they would have finished the job.”

Check Also
Close
Live COVID-19 statistics for
World
Confirmed
91,589,923
Recovered
50,617,591
Deaths
1,962,229
Popular Posts
Facebook Twitter WhatsApp Telegram Viber
Back to top button
Close
Popular Posts
Most Commented
x
More Information
We and our partners use technology such as cookies on our site to personalise content and ads, provide social media features, and analyse our traffic. Click below to consent to the use of this technology across the web. You can change your mind and change your consent choices at anytime by returning to this site. Read more
I accept
Cookies Settings
Cookie Box Settings
Cookie Box Settings