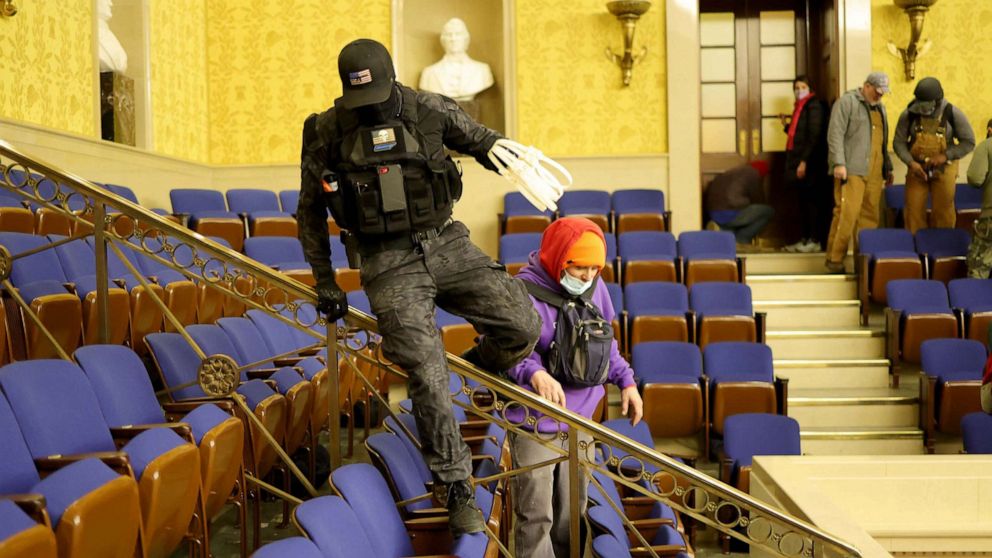 Federal authorities have arrested two men suspected in last week’s siege of the Capitol who were allegedly seen in tactical gear and carrying plastic restraints.

The U.S. Attorney’s Office for the District of Columbia announced Sunday evening that Eric Gavelek Munchel was arrested in Tennessee for his alleged role in the incident as well as Larry Rendell Brock in Texas.

According to federal prosecutors, Munchel appears to be one of the men seen and photographed in the Senate chambers wearing black tactical gear and carrying plastic restraints, an item in a holster on his right hip, and a cell phone mounted on his chest with the camera facing outward, which was used to record the day’s events.

He appears to be the man seen and photographed in the Senate chambers wearing black tactical gear and carrying plastic restraints, an item in a holster on his right hip, and a cell phone mounted on his chest with the camera facing outward, which was used to record the incident, the U.S. Attorney’s office said.

Munchel has been charged with “one count of knowingly entering or remaining in any restricted building or grounds without lawful authority and one count of violent entry and disorderly conduct on Capitol grounds,” according to the U.S. Attorney.

An affidavit released Monday for Munchel’s arrest includes multiple photos purporting to show him inside the Capitol during Wednesday’s siege, as well as a screenshot of his Facebook and a photo that shows him standing with a shotgun and flag in front of a TV on which President Trump was shown speaking.

An FBI agent said on the day of the Capitol attack, law enforcement actually encountered Munchel at a hotel in Washington and asked him about what appeared to be a gun he was wearing in a holster in his side. They instead found he was carrying a black and yellow taser, which he told agents he was possessing merely for self protection.

While in photos from the Capitol it appears Munchel was wearing that same taser, he has not yet been charged with unlawful possession of a weapon inside the Capitol. Officials have said many of the charges being filed early against Capitol suspects are in many cases “placeholders” so they can get suspects into custody and thus escalate their investigative efforts.

The authorities also arrested Larry Rendell Brock in Texas, the U.S. Attorney’s office said. He appears to be the man who was photographed and seen entering the building wearing “a green helmet, green tactical vest with patches, black and camo jacket, and beige pants holding a white flex cuff, which is used by law enforcement to restrain and/or detain subjects,” the U.S. Attorney’s office said.

Brock was charged with “one count of knowingly entering or remaining in any restricted building or grounds without lawful authority and one count of violent entry and disorderly conduct on Capitol grounds,” according to the U.S. Attorney’s office.

Attorney information for both suspects was not immediately available.

Brock spoke with the New Yorker after Wednesday’s riot, which left Capitol Police Officer Brian Sicknick and four others dead and massive destruction to the building, and admitted he participated in the rally.

“The president asked for his supporters to be there to attend, and I felt like it was important, because of how much I love this country, to actually be there,” he said in the interview that was published Jan. 9.

An affidavit submitted to the D.C. District Court cited the New Yorker interview as well as other news coverage that allegedly showed him inside the building. The affidavit said that Brock’s ex-wife recognized him in photos showing him participating in the attack on the Capitol and contacted the FBI.

“I just know that when I saw this was happening I was afraid he would be there,” the witness, who claimed she was married to Brock for 18 years, told investigators. “I think you already know he was there. It is such a good picture of him and I recognize his patch.”

A separate witness later contacted the FBI to report Brock’s appearance in photos in the Capitol.

“It looks like him and he has pilot wings on his chest in this picture,” the witness said. “He was an A-lO pilot.”

While both of the affidavits against Brock and Munchel point out they were carrying plastic restraints, neither have been accused yet of seeking to kidnap or detain lawmakers or other staff at the Capitol last week, though officials tell ABC News that determining whether such plots existed remains a top priority in their investigations.

The FBI said it is still searching for more suspects in Wednesday’s incident. Anyone with information can contact the FBI tip line at 1-800-CALL-FBI.