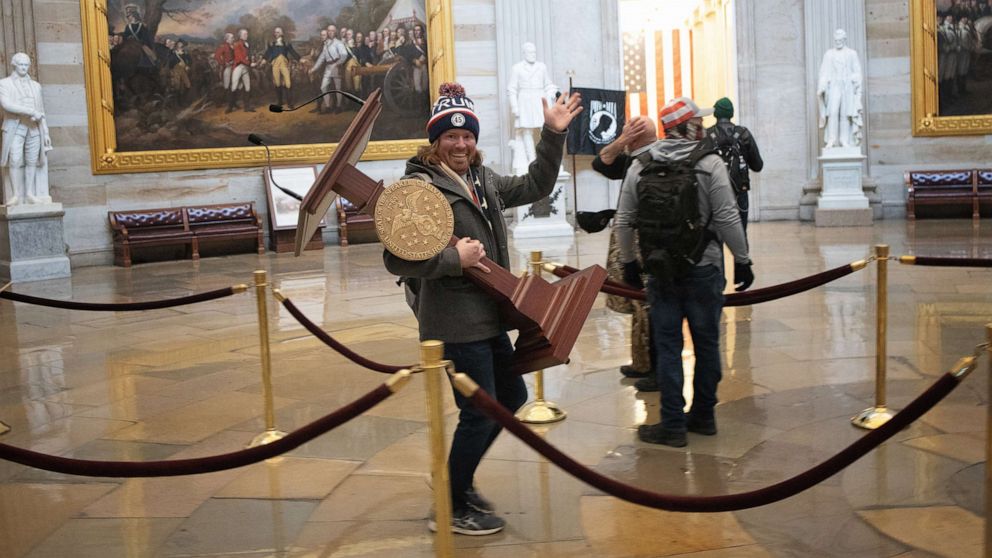 The Capitol riot suspect accused of stealing Nancy Pelosi’s lectern was released from jail Monday afternoon on a $25,000 bond.

Adam Johnson, 36, of Parrish, Florida, did not answer reporters’ questions following his federal court appearance in Tampa. Federal investigators arrested Johnson on Friday and say he was the man seen in a viral photo taken during Wednesday’s siege smiling as he carried the lectern through the halls of the building.

He has been charged with “one count of knowingly entering or remaining in any restricted building or grounds without lawful authority; one count of theft of government property; and one count of violent entry and disorderly conduct on Capitol grounds,” according to the U.S. Attorney’s office.

David Bigney, one of Johnson’s attorneys, said his client would not be making any statements.

“Obviously if he could turn back the clock, I would suspect he would,” Bigney told reporters.

Federal investigators said the lectern, which has a value of more than $1,000, was found by a Senate staff member a day after the riots in the Red corridor of the Senate wing off the rotunda in the Capitol building.

Johnson was ordered to appear in federal court in Washington D.C. on Jan. 19, and his attorney told reporters he will make the appearance. He is barred from traveling anywhere but D.C. for his court appearance, according to prosecutors.

Johnson was also ordered to surrender any weapons and his passport and must comply with a home curfew between 9 p.m. and 6 a.m. Johnson will have a monitoring system, but not an ankle monitor, according to prosecutors.