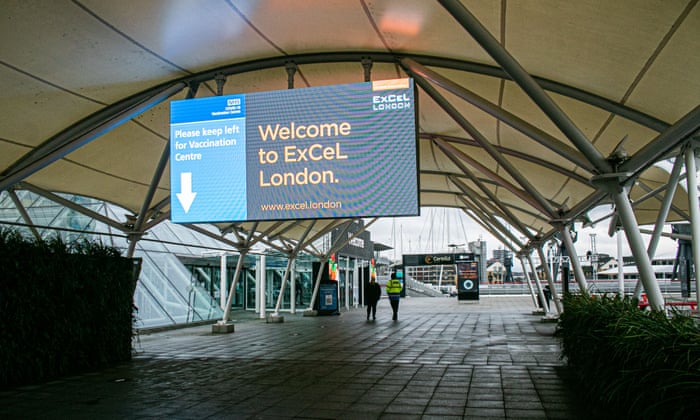 London and the East of England regions have vaccinated the lowest proportion of people aged over 80, amounting to a little under the third of their total population in that age group, according to the first regional figures published by the NHS in England.

An analysis of the newly released data by the Guardian highlights marked regional discrepancies with the two areas well behind the NHS region North East and Yorkshire, where nearly 50% of the over 80s have received at least one dose.

A total of 29% of the over-80s in the East of England region and 31% in London have received a first dose of either the Pfizer/BioNTech or
Oxford/AstraZeneca vaccine. By contrast, the proportion in North East and Yorkshire is more than 46%.

The reasons for the discrepancies are not immediately clear, although GPs and MPs have complained that there is not enough consistent supply of the two vaccines across England, making it difficult to plan ahead.

Some of the discrepancy could be due to differing population levels among the 80-plus age category, one of the highest-priority groups: 3.4% of Londoners are aged 80 or more, compared with 5.2% in the north-east and Yorkshire.

Doctors’ surgeries offering vaccinations have had to cancel appointments, restrict bookings and plead for more supplies, as the NHS manages supply of the potentially life-saving vaccinations around the country.

Some GPs have reported that they have been told they cannot start vaccinations of the next target group of people (those between 75 and 80 years) until other parts of the country have caught up – prompting complaints that some areas are being “levelled down”.

The four remaining English regions have been vaccinating the over-80s at a roughly similar rate, with the Midlands achieving 36%, the South East and South West each on 37%, and the North West 38%.

A total of 2.49m people in England received a first dose of either vaccine by 13 January, an increase of 239,815 on the previous 24 hoursThis amounts to 1.68m a week if maintained over seven days.

On Wednesday, Boris Johnson acknowledged that the vaccine distribution was uneven while giving evidence to the Commons liaison committee. Reflecting more up-to-date data, the prime minister said the over-80s vaccination rate was “more than 50%, well over 50% now in the north-east and Yorkshire”. But he added it was “less good in some other parts of the country”.

The UK needs to reach 2m doses a week in order to reach the 15m most vulnerable people by mid-February. The government aims to offer a first dose to all people in the four most vulnerable categories by 15 February.

The four categories include the over-70s, people who live in care homes, NHS and care workers, and those with serious underlying health conditions.

As Covid-19 runs riot across the world, China controls the pandemic