The earthquake also hit 34 km south-southeast of Mamuju, which is home to around 15,000 people.

The depth of 10km may seem small but shallow earthquakes are felt more strongly than deeper ones as they are closer to the surface.

The VolcanoDiscovery website has reported that vbaased on the preliminary seismic data, the quake should have been widely felt by almost everyone in the area of the epicenter.

The outlet reported the earthquake “might have caused light to moderate damage”.

VolcanoDiscovery added “moderate shaking” likely occured in Mamuju, as well as in Polewali 58km away from the epicentre, and 62km away in Majene. 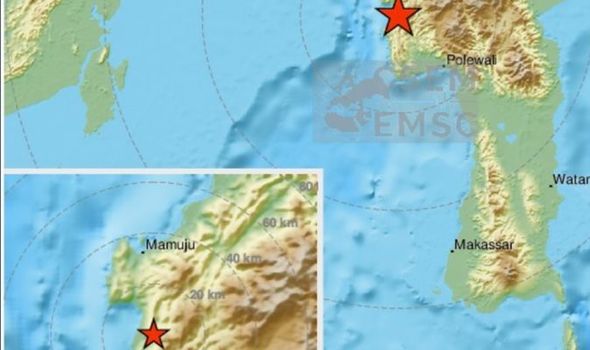 Indonesia, which experiences regular seismic and volcanic activity because of the country’s location on the Pacific Ocean’s “Ring of Fire”, where tectonic plates collide, has been hit by a number of earthquakes over recent days.

The quake, which also had a depth of 10km, hit at 1.35pm local timem with the epicentre located 4km from northwest Majene district.

Ten days earlier on January 4, a 5.0 magnitude earthquake, again with a depth of 10km, struck an area 137km north-northwest of Kendari.

Two years ago in 2018, Indonesia was rocked by a massive 7.5-megnitude earthquake that subsequently triggered a tsunami.

The disaster left more than 4,300 people dead or missing.

In 2004, a devastating 9.1-magnitude quake struck off the coast of Sumatra.

This also triggered a tsunami, killing 220,000 throughout the region, including around 170,000 alone in Indonesia.

Covid vaccinations: London and East of England lag behind other NHS regions