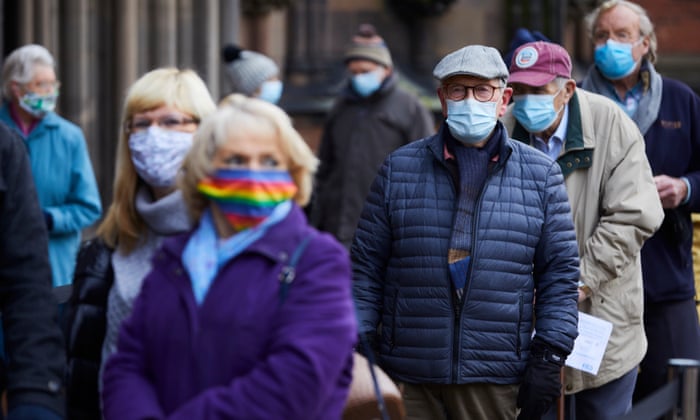 Ministers are awaiting evidence on whether the Covid-19 vaccines prevent transmission of the virus before they can even consider laying out a timetable for lifting lockdown restrictions, government sources say.

With early data suggesting the tide may be beginning to turn in some parts of the country, Boris Johnson has come under pressure from lockdown sceptics on his own backbenches to say how and when the “stay at home” order can be loosened.

But a Downing Street source insisted: “It’s just too soon. We’re nowhere near even looking at what the process would be.” Johnson issued a video message on Friday, urging the public to “think twice before leaving the house this weekend”.

As well as analysing the latest data on case numbers and hospitalisations, it is understood ministers are waiting to see Public Health England (PHE) research on the impact the vaccines may have on limiting the spread of the disease. “That’s very important,” one government insider said.

Clinical trials demonstrated the overwhelming efficacy of the vaccines in preventing patients from becoming ill and dying with Covid but did not make clear whether those people could still be vectors for the virus.

Johnson has been notably cautious about promising an end to the lockdown, warning that he cannot yet say whether schools will be able to reopen after the February half-term.

He is unlikely to follow Scotland and Wales in tightening restrictions, focusing instead on compliance. The new business secretary, Kwazi Kwarteng, urged employers earlier this week to take “every possible step” to enable their staff to work from home.

Data published by the government’s Scientific Advisory Group for Emergencies (Sage) on Friday offered some early signs that infections appear to be levelling off.

The latest R number for the UK is 1.2 to 1.3, and 1.1 to 1.3 in England, with the number of new infections in the UK growing by between 2% and 5% every day, according to Sage. The week before, the R value for the UK was 1.0 to 1.4. The R value indicates the average number of people to whom an infected person passes the virus.

The number of people testing positive for the virus showed an increase on Friday, however, to 55,761, up from 48,682 on Thursday.

While overall the R number suggests the outbreak is continuing to grow, there are regional differences, with London, the south-east and the east of England showing signs that infections could be levelling off or even potentially falling.

In the capital, the R number is between 0.9 and 1.2, with the number of new infections somewhere between shrinking by 2% and growing by 3% a day. But experts warn the figures do not reflect the present moment in time.

“These estimates represent the transmission of Covid-19 over the past few weeks due to the time delay between someone being infected, having symptoms and needing healthcare,” the team behind the government’s R number data said.

The Sage estimate is based on R values calculated from a number of teams, including the MRC Biostatistics Unit at Cambridge University, whose own analysis is more upbeat – potentially because its number is calculated from different types of data to some other groups, including from mobility trends.

Lockdown-sceptic Tory backbenchers have seized on early signs that the second wave may have peaked to press the case for the government to loosen restrictions.

The Covid recovery group chair, Mark Harper, has set 8 March as a deadline for starting to reopen some aspects of the economy – three weeks on from the government’s 15 February deadline for vaccinating the most vulnerable groups.

The Conservative MP Steve Baker wrote to colleagues earlier this week to say Johnson’s leadership would “inevitably be on the table” if he failed to set out “a clear plan for when our full freedoms will be restored” – though when the letter leaked to the Sun he quickly tweeted his support for the prime minister.

Only 14 Conservative MPs voted against the latest lockdown rules, which expire at the end of March – but many others supported the government while calling for restrictions to be eased as soon as is practicable.

However, ministers are focused on the fact that cases remain at an extremely high level, and the lag between infection and hospitalisation means the situation in hospitals will get worse before it gets better.

Experts say it is too soon to asses whether cases have peaked. Dr Michael Tildesley, of the University of Warwick, who is part of the Scientific Pandemic Influenza Group on Modelling (SPI-M) that feeds into Sage, said more time was needed before it became clear how case numbers were changing.

“There are early signals in the south-east and London that spread may be slowing, but there is still a lot of uncertainty around this,” he said.