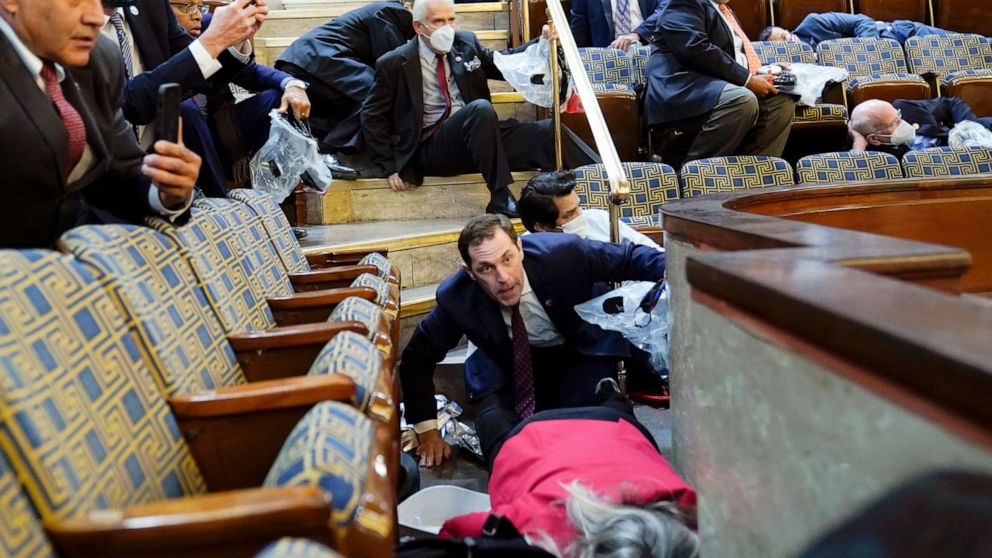 A week after rioters stormed the U.S. Capitol building, investigators are trying to determine whether one of the biggest threats to lawmakers that day emanated from within Congress itself.

As Americans grapple with the fallout from the deadly insurrection, Democrats have leveled increasingly serious accusations against their colleagues across the aisle, framing some Republican members as “accomplices” and “co-conspirators” in the assault. Allegations range from inciting rioters with inflammatory rhetoric to actively assisting the throngs of Trump supporters who laid siege to the Capitol complex.

Until Wednesday, when President Donald Trump was impeached for the second time, Democratic leaders sought to downplay any immediate reprisals for Republican colleagues whom they allege to have incited or assisted rioters. But several rank-and-file members have already plowed ahead with calls for investigations.

Sherrill, a former U.S. Navy helicopter pilot and former federal prosecutor, led a coalition of more than 30 Democrats who signed on to a letter requesting an immediate investigation into “suspicious behavior and access” for some visitors the day before the Capitol assault, alleging that unnamed lawmakers led “an extremely high number of outside groups” through the building on what they say could have been reconnaissance tours.

“Members of the group that attacked the Capitol seemed to have an unusually detailed knowledge of the layout of the Capitol Complex,” Sherrill and her co-signers wrote to the House and Senate Sergeants-at-Arms and the U.S. Capitol Police.

The Capitol has been closed to the public since March due to the coronavirus pandemic. The complex has been open to only members, staff, and “official business visitors” escorted by members or staff, according to a notice the House Sergeant at Arms sent to congressional offices on Jan. 4, which was obtained by ABC News.

On Thursday, at least one Republican lawmaker confirmed what Democrats said they witnessed the day before, but urged caution before assigning blame to one party.

“I definitely saw folks in the hallways — who were not members — that were clearly here as guests” on Tuesday, said Rep. Peter Meijer, R-Mich. “I think it’s important we not jump to conclusions before there is a full investigation.”

Democrats have not explicitly accused any members or even made a specific reference to Republicans, nor have they made any specific allegation that members leading the tours were privy to any plans to attack the Capitol the next day.

Three senior GOP leadership aides and a public information officer for the U.S. Capitol Police did not respond to a request for comment from ABC News.

While no specific allegations have been made regarding lawmakers’ actions prior to the attack, Democrats have raised concern with the actions of at least one Republican lawmaker during the riot.

As protesters stormed the grounds, Rep. Lauren Boebert, R-Colo., an outspoken gun rights advocate who had previously boasted about carrying her firearm onto Capitol grounds, tweeted about Pelosi’s removal from the House chambers by security. Democrats expressed alarm at her apparent disregard for officials’ instructions not to disclose information about members’ whereabouts.

“@laurenboebert was told by the Sergeant of Arms in the chamber to not make any social media posts,” Rep. Eric Swalwell, D-Calif., tweeted in response. “It was said repeatedly. She defied it because she is more closely aligned with the terrorists than the patriots.”

Boebert, in a statement, denied wrongdoing and decried Democrats’ “false accusations of inciting the type of violence they have so frequently and transparently supported in the past.”

Other Democrats have called for investigations into the inflammatory language some members used in the days and weeks leading up to Jan. 6, and what role that might have played in inciting the riots.

Rep. Cori Bush, D-Missouri, issued a resolution on Monday to “initiate investigations for removal of the members who attempted to overturn the results of the election and incited a white supremacist attempted coup.” Rep. Jason Crow, D-Colorado, also penned a letter requesting that the Government Accountability Office examine the “impact of rhetoric by government and elected officials that contributed to or led to the insurrection.”

In December, Rep. Madison Cawthorn, R-N.C., encouraged supporters to “call your congressman” and “lightly threaten them” if they did not support blocking President-elect Joe Biden’s election certification. On the eve of the Jan. 6 rally, Rep. Marjorie Taylor Greene, R-Ga., declared, “This is our 1776 moment.” And addressing protesters just hours before they laid siege to the Capitol, Rep. Mo Brooks, R-Ala., said, “Today is the day American patriots start taking down names and kicking ass” — though he later claimed “the bulk” of his remarks were pulled from “often-used” prior speeches.

Some of those who appeared eager to rev up supporters in the days leading up the riots, including Brooks, have sought to distance themselves from the violence.

“Our message was hijacked by people whose illegal breach of the Capitol did a great disservice to our cause and America,” Brooks said in a statement following the attack. “Those who engaged in illegal conduct should be ashamed of themselves because their attack on the U.S. Capitol destroyed two months of debate and work.”

Despite growing calls from caucus members, Democratic leaders have so far played down expectations for immediate action against Republican lawmakers, arguing that the focus should remain on removing Trump from office.

“We will bring the rioters to justice. Their accomplices in this House will be held responsible,” Rep. Jerry Nadler, D-N.Y., the chairman of the House Judiciary Committee, said Wednesday. “But today, we must focus on the gravest threat first: President Trump,”

Rep. Steny Hoyer, D-Md., the second-ranking Democrat in the House, told reporters Wednesday that “there will be time to deal with” potential action against Republicans who may have incited rioters.

“Right now, we’re dealing with the president of the United States,” Hoyer said.