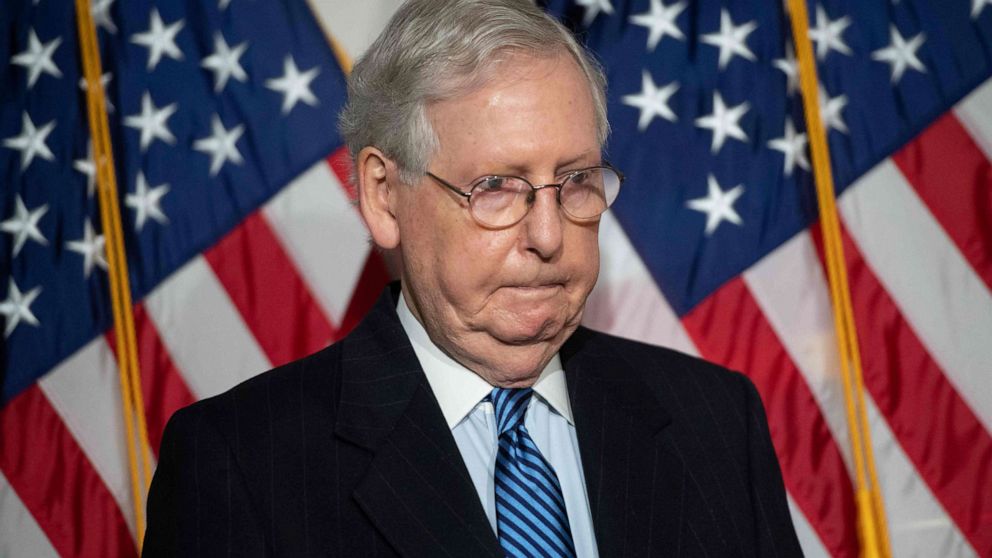 Senate Majority Leader Mitch McConnell signaled in a letter to his colleagues Wednesday that he has not ruled out voting to convict President Donald Trump in an upcoming Senate impeachment trial, even as he made it clear he thinks that no trial should start until after Trump leaves office.

“While the press has been full of speculation, I have not made a final decision on how I will vote and I intend to listen to the legal arguments when they are presented to the Senate,” McConnell wrote in the message to his members.

McConnell’s statement came after The New York Times reported Tuesday, and ABC News confirmed, that McConnell has told those close to him that he is pleased with the House’s impeachment efforts.

The House passed an article of impeachment charging him with “incitement of insurrection” for a speech he gave last Wednesday just before his supporters stormed the Capitol.

McConnell’s statement marks a significant change in posture for the majority leader, who disavowed the first impeachment effort of Trump as a “political exercise” and a “charade.”

ABC News has confirmed reports that in the days since the assault, McConnell has expressed that he is furious with President Trump, and has suggested that impeachment might make it easier to purge the Republican party of Trump.

It’s not yet clear when the just-passed article of impeachment will be sent to the Senate, triggering the start of another trial.

In a statement released just after the House passed the article of impeachment Wednesday evening, McConnell signaled that he believes it would be best for the country to wait on holding a Senate trial until after President-elect Joe Biden is sworn into office next week.

“Even if the Senate process were to begin this week and move promptly, no final verdict would be reached until after President Trump had left office. This is not a decision I am making; it is a fact. The President-elect himself stated last week that his inauguration on January 20 is the ‘quickest’ path for any change in the occupant of the presidency,” McConnell said. “In light of this reality, I believe it will best serve our nation if Congress and the executive branch spend the next seven days completely focused on facilitating a safe inauguration and an orderly transfer of power to the incoming Biden Administration.”

The Senate is expected to reconvene for regular session on Jan. 19, the day before the inauguration. That is the earliest date that action related to a trial could occur.

If Pelosi were to transmit the articles on the 19th, the first day of the trial, which is largely ceremonial and will include the exhibition of the article, the swearing-in of the chief justice to preside, and the taking of the oath of senators could occur on Inauguration Day.

Impeachment rules require the trial to begin at 1 p.m. in the Senate each day, six days a week, until a verdict is reached, unless senators unanimously agree to change the rules. Federal law requires inaugurations to occur at noon. It’s unclear what would happen if the two events were to coincide.

Transmission before Inauguration Day is something McConnell is seeking to avoid and his statement Wednesday afternoon seems aimed at urging House Speaker Nancy Pelosi to hold on transmitting the articles until after Jan. 20. Once the House managers bring the articles to the Senate floor, a trial begins. McConnell has no control of the schedule after that point.

Democrats, including Senate Minority Leader Chuck Schumer, have urged McConnell to call the Senate back early for an emergency session to begin the trial.

“The bottom line is that Leader McConnell has the ability to call us back into session and we can then move to convict Donald Trump in an impeachment trial and try him,” Schumer said Tuesday.

But McConnell’s statement makes clear he has no intention of altering the schedule. His office confirmed Wednesday that McConnell told Schumer he would not call the Senate back early.

Once the trial tees off, it will take the vote of two thirds of the Senators serving the in chamber to convict the President.

At this point, it’s unclear whether there will be the necessary Republican support.

No GOP senator has explicitly stated their intention to vote to convict Trump, but several have gone on the record saying they support Trump’s removal from office.

Sen. Lisa Murkowski, R-Alaska, told a local news outlet that she wants Trump “out” but hasn’t explicitly stated if she will support impeachment efforts.

The growing GOP support for removal marks a change from last year’s impeachment, where Sen. Mitt Romney, R-Utah, was the sole GOP senator to vote to convict.

Still, many Republicans have said they will not support the impeachment effort. One Democratic senator, Joe Manchin of West Virginia, called an impeachment effort at the start of the Biden presidency “ill-advised.”

Manchin’s concern comes, in part, as Democrats weigh the delays that a trial might cause to Biden’s legislative agenda in the early days of his presidency.

It will take agreement between Democrats and Republicans to allow for the Senate to consider “other business” while the trial is ongoing. That could potentially include slating of some of Biden’s top Cabinet nominees.

Biden has spoken with McConnell about the possibility of agreement that would allow the Senate to continue work on his key priorities while a trial is underway.

Biden said Tuesday he had spoken with lawmakers about the whether it was possible to “go half-day on dealing with the impeachment, and half a day getting my people nominated and confirmed in the Senate, as well as moving on the package?”

“That’s my hope and expectation,” he said.

If an agreement on this could be reached, the Senate could spend the earliest days of the Biden administration hearing trial evidence in the afternoon and working on Biden legislative priorities in the evening.

Lawsuit accuses Donald Trump, Giuliani and others of conspiring to incite Capitol riot