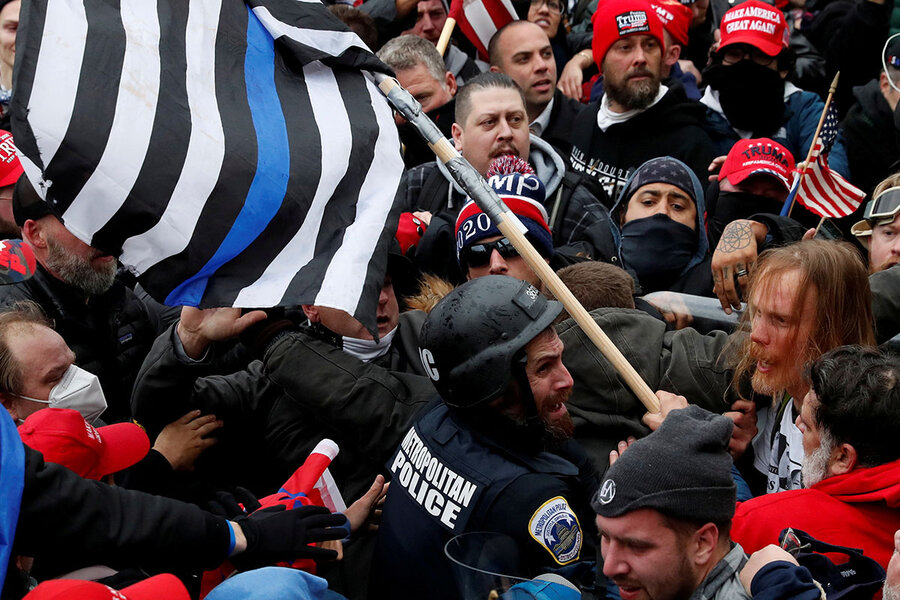 In 40 years as an Appalachian cop, George Erwin Jr. came to this conclusion: Only “a thin blue line separates good from evil.”

But Mr. Erwin, the former sheriff of North Carolina’s Henderson County says he saw those lines blur at the U.S. Capitol on Jan. 6.

“My whole thing is, that when you’ve got people who are going out here and saying they back the blue … and the next thing you know you’ve got people carrying ‘back the blue’ flags dragging officers down steps and beating them with a flagpole and his own nightstick, you don’t go there with me,” says Mr. Erwin.

The vast majority of officers fought valiantly to protect lawmakers from harm. One officer died, 60 were injured, and the department lost another to suicide. But Capitol Police has opened as many as a dozen investigations into reports that officers aided the mob, and at least two have been suspended. Sworn officers were also on the other side, joining the rioters, a fact that has Mr. Erwin shaking his head. More than two dozen officers are under investigation for their participation in Jan. 6 events.

“If officers went up there and did that, that’s a criminal act, and you ought to be held accountable like everybody else.”

As the FBI braces the country for more trouble ahead of President-elect Joe Biden’s inauguration, the attack on the Capitol revealed a troubling national blind spot: the political radicalization of police that predates the presidency of Donald Trump.

Many Americans are struggling to understand the dynamics of right-wing terrorism, including the role of law enforcement officers and military personnel, and how rhetoric and mass psychology help to answer a fundamental question: Who do police protect and who do they protect them from?

“So often we tend to look at far-right militancy as something on the fringes of our society, tantamount to Al Qaeda and ISIS, without realizing that, no, these are members of state legislatures, police officers, military personnel,” says former FBI agent Michael German, who infiltrated and prosecuted neo-Nazi groups in the 1990s.

He argues that the potential threat to public safety from the far right is much greater, given the cloak of authority under which these extremists can operate. “Their capabilities are actually on par with any foreign terrorist group, if not greater. They don’t just have the passion of their beliefs. What they have is government sanction.”

A failure of imagination?

Since 2000, more than two dozen states have unmasked police officers with connections to white supremacist groups. Hundreds of federal, state, and local law enforcement officials have been caught expressing racist, nativist, and sexist views on social media, according to a September 2020 report by the Brennan Center for Justice in New York.

Those facts provide an uneasy backdrop to the Jan. 6 attack, where police leaders seemingly underestimated the threat, leaving the crucible of democracy vulnerable to a mob. The former chief of U.S. Capitol Police, who resigned in the aftermath, has said that security officials at the House and Senate declined to call in the National Guard in advance of a rally, which included remarks by President Trump, that had been hyped as a final showdown.

Larger failures of imagination, added to biases of individual police officers, are part of what analysts say makes police reform so difficult – and makes radicalization among officers possible. Making the issue harder for Americans to see is institutional discomfort at the FBI, in particular, to confront the problem publicly. The FBI tells its agents, for instance, to not discuss white supremacy cases around local police for fear of tipoffs, says Mr. German.

Meanwhile, Congress has struggled to get data to compare the agency’s response to Black Lives Matter protests against right-wing extremist activities last year, which killed dozens of Americans, including officers. In 2019, the FBI established the Domestic Terrorism-Hate Crimes Fusion Cell. But in its reporting to Congress it has lumped in antifa, an anti-fascist movement, with right-wing extremists like Boogaloos, an equivalency that critics say muddies the threat that should be prioritized.

Brian Corr, a past president of the National Association for Civilian Oversight of Law Enforcement, says the history of U.S. slave patrols has cast a long shadow in Black communities. This contrasts with the story that cops tell themselves that “the public are the police and the police are the public,” he says.

“Both of these are historically true. But part of what’s happening in our society is that people are unable to hold competing truths. For many, there is only one truth: Either police are corrupt and violent and racist or they’re heroes that run toward gunfire when we run away from it,” says Mr. Corr.

That divide has only sharpened under President Trump, who has at times attempted to blur the line between politics and policing. He invoked “law and order” when he sent federal police to quell protests in Portland, Oregon, against the wishes of local authorities and used them last June to clear peaceful protests from Washington’s Lafayette Square so he could be photographed holding a Bible outside a church. His militaristic rhetoric on the border has also energized Border Patrol members.

According to the Center for Strategic and International Studies, right-wing groups were responsible for 41 politically motivated attacks and plots last year, including attacks that killed police officers in Santa Cruz and Oakland, California; Kimberly, Alabama; and Ely, Nevada. There were 12 left-wing attacks and plots in the same period. Police officers were also hurt and some seriously injured, at times by gunfire, during last summer’s social justice protests. Still, lethal threats to law enforcement have primarily come from right-wing extremists.

“That is what is hard to understand about the apparent affinity in law enforcement for far-right militants at riots,” says Mr. German.

Analysts say the policing of Black Lives Matters protests and of protests by white and armed participants reflects that affinity. Last August, when pro-police groups rallied in Kenosha, Wisconsin, to face down racial justice protesters, police handed out water bottles to militiamen, including Kyle Rittenhouse, an armed white teen who allegedly shot dead two men and injured a third.

To many analysts, the preparation for pro-Trump protests at the Capitol was perhaps the ultimate expression of that bias in terms of which groups pose a threat to public safety.

Meanwhile, pandemic malaise, social unrest, and on-the-job traumas endured by police officers, particularly military veterans, have likely boosted radicalization in the ranks. While veterans make up around 6% of the population, nearly 1 in 5 police officers previously served in the military, according to a 2017 analysis of U.S. census data.

“Folks go into these dangerous places and come back disillusioned with their own government and come back with a counterinsurgency mindset and techniques,” says Boston University law professor Robert Tsai, author of “Practical Equality: Forging Justice in a Divided Nation.” “One of the potential consequences … is that more [right-wing officeholders] demand that police join their political efforts, their political aims. And when law enforcement becomes politicized, it becomes radicalized.”

But he points to how law enforcement, a naturally conservative institution that is often the target of progressive critiques, actually performed in the hourslong siege at the Capitol.

“Yeah, there are racists in police departments, but that’s not the problem we’re facing now,” says Mr. Moskos, now a criminologist at John Jay College of Criminal Justice in New York. “At some level they failed miserably, but, that said, one of them got killed and they literally fought, died, and saved our democracy. Those words aren’t often said.”

Still, professionalism is key for police to maintain a public trust that has been battered over the last year, in part because of the anger stirred by the killing last May of George Floyd and the police response to months of protests across the country.

The FBI on Wednesday arrested two Rocky Mount, Virginia, police officers – both military veterans, including one who was injured in an improvised explosive device attack in Iraq – after they posted pictures of themselves inside the Capitol. The men said they were welcomed in, but also said in social media posts that they “attacked” the building. They face charges of trespassing, disorderly conduct, and using threatening or abusive language inside the Capitol.

The Seattle Police Department is investigating two officers for their role in the insurrection at the Capitol.

Oath Keepers, an anti-government militia that boasts of having military and police among its members, were also on hand last week. According to the Anti-Defamation League, Oath Keepers aim much of their propaganda at military and police, reminding them that their oath to the Constitution includes defending it “from all enemies, foreign and domestic.” Their propaganda is of a global order that must be resisted by patriots, lest they are disarmed and sent to concentration camps.

Among those who didn’t go to Washington last week was former Sheriff Richard Mack of Arizona’s Graham County, the founder of the Constitutional Sheriffs and Peace Officers Association.

“I was browbeat for not going, but I just had a bad feeling about it,” says Mr. Mack. “The bottom line is, a lot of people are frustrated in this country, and I understand that frustration, and that frustration comes from both Republicans and Democrats making a mockery of our Constitution. But I will never support violence. And my message remains the same to all police and all military: Keep your oath to uphold and defend the Constitution. That’s how we will fix this problem and restore the peace.”

Still, some point to Mr. Mack’s organization as a possible nexus for police operating outside the bounds of the Constitution. Constitutional sheriffs contend that they have the power to rebuff federal laws that they – not judges – deem unconstitutional. And they have vowed to not enforce gun restrictions and mask mandates.

“You see a lot of these self-described constitutional sheriffs also active in the militia movement,” says Mr. Tsai, who sees a slippery path to radicalization in sheriff activism. “They are now engaged in anti-mask, anti-pandemic actions, and they proudly say, ‘We’re not going to enforce these things.’ They are part of this broader right-wing politicization of law enforcement.”