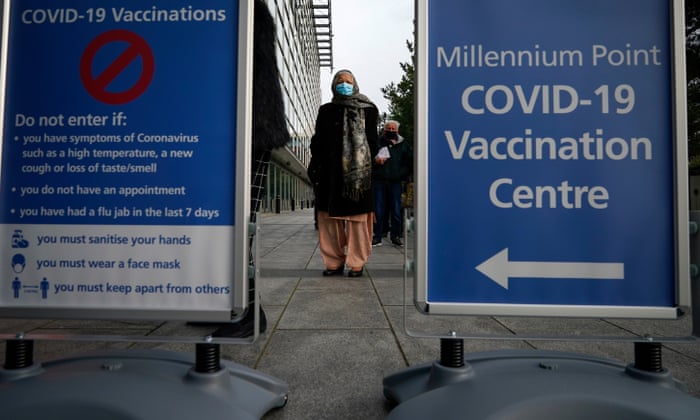 Advisers from the Scientific Advisory Group for Emergencies (Sage) have raised fresh concerns over Covid vaccine uptake among black, Asian and minority ethnic communities (BAME) as research showed up to 72% of black people said they were unlikely to have the jab.

Historical issues of unethical healthcare research, and structural and institutional racism and discrimination, are key reasons for lower levels of trust in the vaccination programme, a report from Sage said.

The figures come from the UK Household Longitudinal Study, which conducts annual interviews to gain a long-term perspective on British people’s lives.

In late November, the researchers contacted 12,035 participants to investigate the prevalence of coronavirus vaccine hesitancy in the UK, and whether certain subgroups were more likely to be affected by it.

Overall, the study found high levels of willingness to be vaccinated, with 82% of people saying they were likely or very likely to have the jab – rising to 96% among people over the age of 75.

Women, younger people and those with lower levels of education were less willing, but hesitancy was particularly high among people from black groups, where 72% said they were unlikely or very unlikely to be vaccinated. Among Pakistani and Bangladeshi groups this figure was 42%. Eastern European groups were also less willing.

These figures are higher than previous estimates by the Royal Society for Public Health. Its poll of 2,076 UK adults found 57% of respondents from BAME backgrounds would take a Covid jab if advised by their GP or another health professional, compared with 79% of white respondents.

“Trust is particularly important for black communities that have low trust in healthcare organisations and research findings due to historical issues of unethical healthcare research,” said the Sage experts.

“Trust is also undermined by structural and institutional racism and discrimination. Minority ethnic groups have historically been underrepresented within health research, including vaccines trials, which can influence trust in a particular vaccine being perceived as appropriate and safe, and concerns that immunisation research is not ethnically heterogenous.”

The report emphasised the need for engagement with trusted sources such as GPs, and scientists from within BAME communities to respond to concerns about vaccine safety and efficacy.

“Approaches should acknowledge the historical issues in healthcare research to address mistrust towards government and healthcare services experienced in black communities in relation to vaccination,” it said.