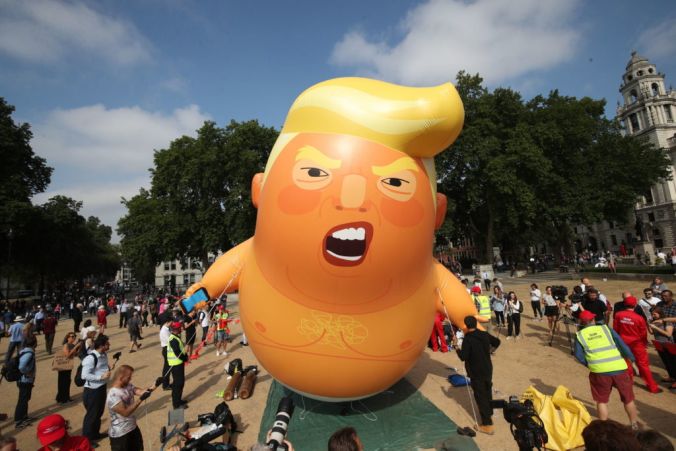 The Donald Trump baby blimp has been “consigned to history” – at a museum.

The huge inflatable depicts the US president in a nappy and clutching a mobile phone.

It took to the skies, above Parliament Square in London, during protests over Mr Trump’s state visit to the UK.

The Museum of London announced in 2019 that it was in talks to acquire the 20ft orange effigy, for its protest collection.

Now, following its global tour, the Trump Baby blimp is “heading to its final resting place,” at the Museum.

It will be conserved and potentially displayed in future years.

The creators of the famous effigy said they hoped it served as a reminder of the fight against the “politics of hate”.

“While we’re pleased that the Trump Baby can now be consigned to history along with the man himself, we’re under no illusions that this is the end of the story,” they said in a statement.

“We hope the baby’s place in the museum will stand as a reminder of when London stood against Mr Trump – but will prompt those who see it to examine how they can continue the fight against the politics of hate.

“Most of all we hope the Trump Baby serves as a reminder of the politics of resistance that took place during Trump’s time in office.”

Sharon Ament, the museum’s director, said it became “determined” to acquire the object in 2018.

“We did not know then what would transpire,” she told PA.

“Of course the museum is not political and does not have any view about the state of politics in the States.”

But the blimp touches on a typical British response, satire, she added.

“We use humour a lot. And we poke fun at politicians. This is a big – literally – example of that….

The balloon-like object has just arrived at the Museum, “squashed” in a suitcase.

“The most ironic and fitting thing now is it’s currently in quarantine in the museum,” Ms Ament said.

“All objects have to be put into quarantine before they go into the collection because they could have insects or with something like clothing…  moths.”

The conservation team will work to make sure the object lasts for future generations.

“This is seven metres tall, there is nothing like it in our collections at all. It’s a massive challenge,” she said.

The Museum is a fitting home as the effigy is “a response from Londoners,” she said.

“It was born in London…  It was an extraordinary and imaginative idea.”

The makers of the blimp said: “This large inflatable was just a tiny part of a global movement – a movement that was led by the marginalised people whose Trump’s politics most endangered – and whose role in this moment should never be underestimated.”

Mr Trump, whose supporters stormed the Capitol, became the first US president to become impeached for a second time.