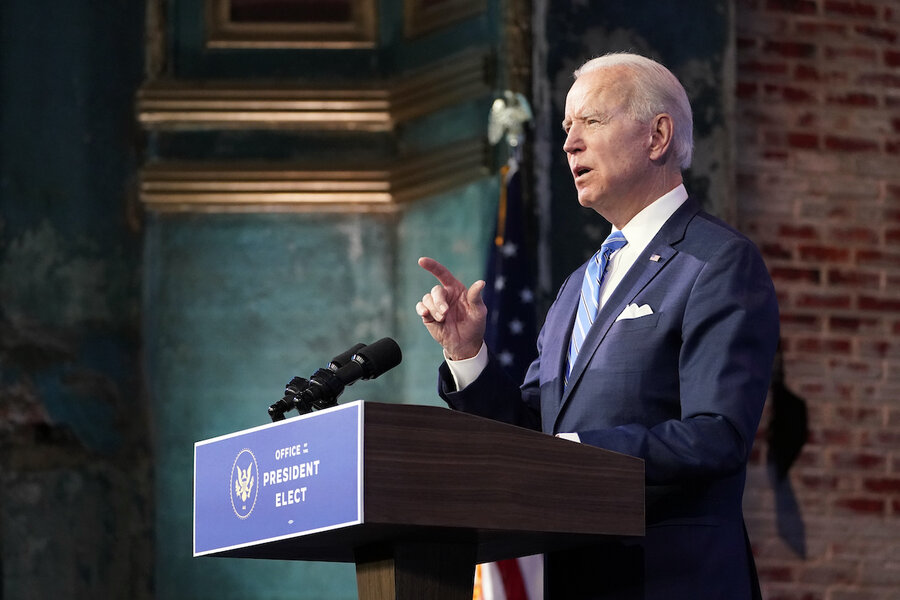 United States President-elect Joe Biden has unveiled a $1.9 trillion coronavirus plan to end “a crisis of deep human suffering” by speeding up the vaccine rollout and pumping out financial help to those struggling with the pandemic’s prolonged economic fallout.

Called the “American Rescue Plan,” the legislative proposal would meet Mr. Biden’s goal of administering 100 million vaccines by the 100th day of his administration, and advance his objective of reopening most schools by the spring. On a parallel track, it delivers another round of aid to stabilize the economy while the public health effort seeks the upper hand on the pandemic.

“We not only have an economic imperative to act now – I believe we have a moral obligation,” Mr. Biden said in a nationwide address Thursday. At the same time, he acknowledged that his plan “does not come cheaply.”

Mr. Biden proposed $1,400 checks for most Americans, which on top of $600 provided in the most recent COVID-19 bill would bring the total to the $2,000 that Mr. Biden has called for. It would also extend a temporary boost in unemployment benefits and a moratorium on evictions and foreclosures through September.

And it shoehorns in long-term Democratic policy aims such as increasing the minimum wage to $15 an hour, expanding paid leave for workers, and increasing tax credits for families with children. The last item would make it easier for women to go back to work, which in turn would help the economy recover.

The political outlook for the legislation remained unclear. In a joint statement, House Speaker Nancy Pelosi and Senate Democratic leader Chuck Schumer praised Mr. Biden for including liberal priorities, saying they would move quickly to pass it after Mr. Biden takes office next Wednesday. But Democrats have narrow margins in both chambers of Congress, and Republicans will push back on issues that range from increasing the minimum wage to providing more money for states, while demanding inclusion of their priorities, such as liability protection for businesses.

“Remember that a bipartisan $900 billion #COVID19 relief bill became law just 18 days ago,” tweeted Sen. John Cornyn, R-Texas. But Mr. Biden says that was only a down payment, and he promised more major legislation next month, focused on rebuilding the economy.

“The crisis of deep human suffering is in plain sight, and there’s not time to waste,” Mr. Biden said. “We have to act and we have to act now.”

Still, he sought to manage expectations. “We’re better equipped to do this than any nation in the world,” he said. “But even with all these small steps, it’s going to take time.”

His relief bill would be paid for with borrowed money, adding to trillions in debt the government has already incurred to confront the pandemic. Aides said Mr. Biden will make the case that the additional spending and borrowing is necessary to prevent the economy from sliding into an even deeper hole. Interest rates are low, making debt more manageable.

Mr. Biden has long held that economic recovery is inextricably linked with controlling the coronavirus.

That squares with the judgment of the U.S. Chamber of Commerce, the most powerful business lobbying group and traditionally an adversary of Democrats. “We must defeat COVID before we can restore our economy and that requires turbocharging our vaccination efforts,” the Chamber said in a statement Thursday night that welcomed Mr. Biden’s plan but stopped short of endorsing it.

The plan comes as a divided nation grapples with the pandemic’s most dangerous wave yet. So far, more than 385,000 people have died of COVID-19 in the U.S. And government numbers released on Thursday reported a jump in weekly unemployment claims, to 965,000, a sign that rising infections are forcing businesses to cut back and lay off workers.

Under Mr. Biden’s multi-pronged strategy, about $400 billion would go directly to combating the pandemic, while the rest is focused on economic relief and aid to states and localities.

About $20 billion would be allocated for a more disciplined focus on vaccination, on top of some $8 billion already approved by Congress. Mr. Biden has called for setting up mass vaccination centers and sending mobile units to hard-to-reach areas.

To that end, Mr. Biden on Friday announced former FDA chief David Kessler as his chief science officer for the vaccine drive. Mr. Kessler has been advising Mr. Biden as a co-chair of his advisory board on the coronavirus pandemic. A pediatrician and attorney, he has emphasized the need to ease public concerns about the safety of the coronavirus vaccines. Confidence in the FDA’s review process is critical to ramping up the effort to vaccinate millions of Americans.

With the backing of Congress and the expertise of private and government scientists, the Trump administration delivered two highly effective vaccines and more are on the way. Yet a month after the first shots were given, the nation’s vaccination campaign is off to a slow start with about 11 million people getting the first of two shots, although more than 30 million doses have been delivered.

Mr. Biden called the vaccine rollout “a dismal failure so far” and said he would provide more details about his vaccination campaign on Friday.

The plan also provides $50 billion to expand testing, which is seen as key to reopening most schools by the end of the new administration’s first 100 days. About $130 billion would be allocated to help schools reopen without risking further contagion.

The plan would fund the hiring of 100,000 public health workers, to focus on encouraging people to get vaccinated and on tracing the contacts of those infected with the coronavirus.

There’s also a proposal to boost investment in genetic sequencing, to help track new virus strains including the more contagious variants identified in the United Kingdom and South Africa.

Throughout the plan, there’s a focus on ensuring that minority communities that have borne the brunt of the pandemic are not shortchanged on vaccines and treatments, aides said.

With the new proposals comes a call to redouble efforts on the basics.

Mr. Biden is asking Americans to override their sense of pandemic fatigue and recommit to wearing masks, practicing social distancing and avoiding indoor gatherings, particularly larger ones. It’s still the surest way to slow the COVID-19 wave, with more than 4,400 deaths reported just on Tuesday.

Mr. Biden’s biggest challenge will be to “win the hearts and minds of the American people to follow his lead,” said Dr. Leana Wen, a public health expert and emergency physician.

The pace of vaccination in the U.S. is approaching 1 million shots a day, but 1.8 million a day would be needed to reach widespread or “herd” immunity by the summer, according to a recent estimate by the American Hospital Association. Dr. Wen says the pace should be even higher – closer to 3 million a day.

Mr. Biden believes the key to speeding that up lies not only in delivering more vaccine but also in working closely with states and local communities to get shots into the arms of more people. The Trump administration provided the vaccine to states and set guidelines for who should get priority for shots, but largely left it up to state and local officials to organize their vaccination campaigns.

It’s still unclear how the new administration will address the issue of vaccine hesitancy, the doubts and suspicions that keep many people from getting a shot. Polls show it’s particularly a problem among Black Americans.

“We will have to move heaven and earth to get more people vaccinated,” Mr. Biden said.

Next Wednesday, when Mr. Biden is sworn in as president, marks the anniversary of the first confirmed case of COVID-19 in the United States.