In this article, the wizard will tell you how he assembled a cluster using eight single-board computers Raspberry Pi 4. A distinctive feature of the assembly is the water cooling of the device.
Water cooling a single Pi doesn't make much sense, but it's a pretty effective solution for a cluster. One big fan means less noise and less cost.
For those who don't know what a Pi cluster is, it is essentially a collection of two or more Pis that are connected together over a network and work together to perform computational tasks, distributing the load.
Tools and materials: -Raspberry Pi 4B (2 GB model is used) – 8 pcs.; – 16-port network switch TL-SG116; – USB charging hub; – HD touch monitor; – Water cooling kit; -Cooling radiator 8 × 30 mm; -Network cable – 8 pcs; -USB C cable – 8 pcs; -LED strip – 3 meters; -Nylon stands; -Set of screws M3;
-MDF 600 × 600 mm; < br> – Thermal paste; Step one: making brackets for radiators
The master began by making 8 acrylic brackets that fix the radiators. He laser cut the brackets from 3 mm thick translucent red acrylic.
Then I cut out an aluminum spacer that fits between the heatsink and the Raspberry Pi. It is needed to slightly raise the heatsink, as the heatsink fittings rest against the connector on the board. To improve thermal conductivity during assembly, I applied thermal paste between the spacer and the radiator. 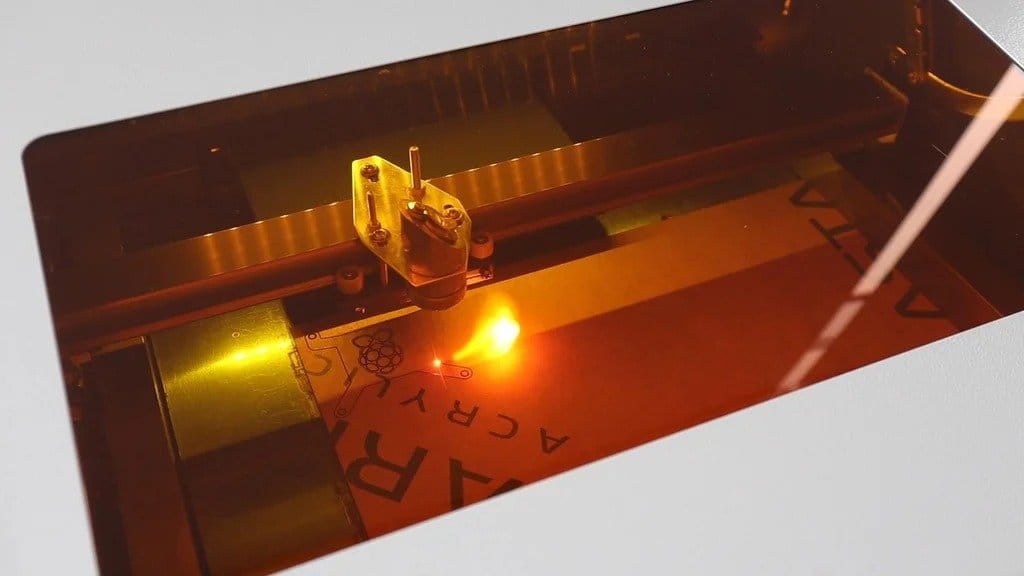 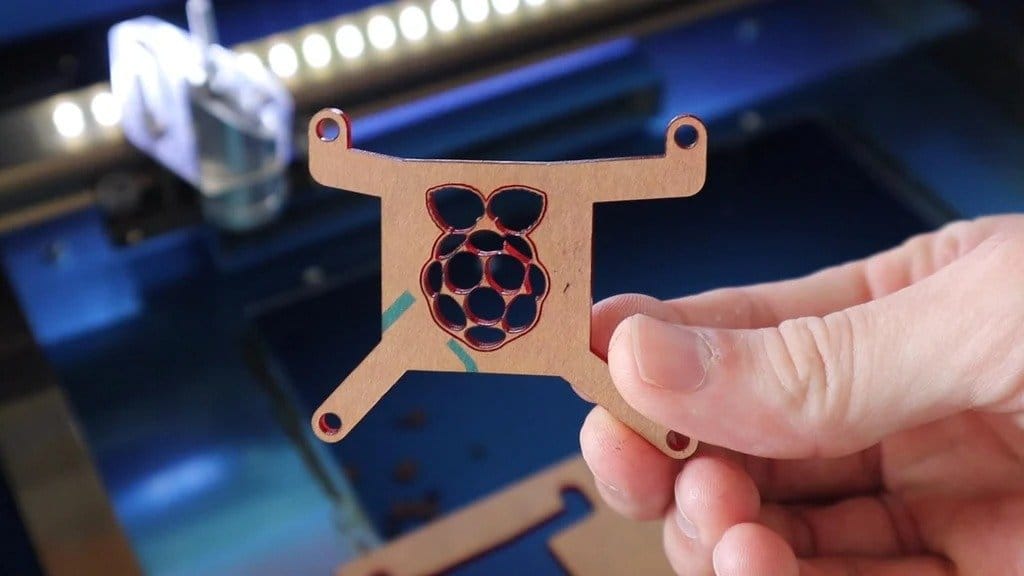 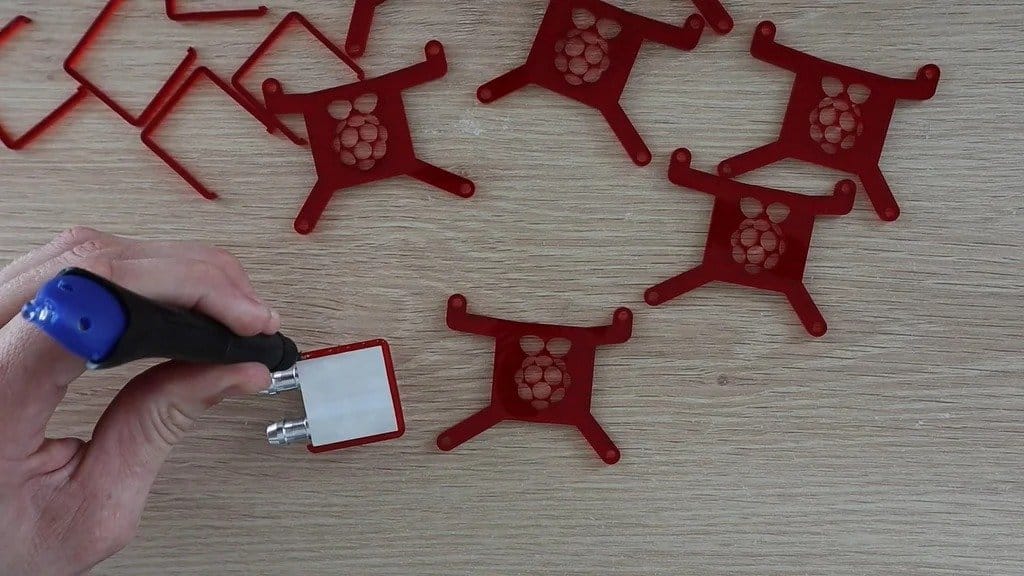 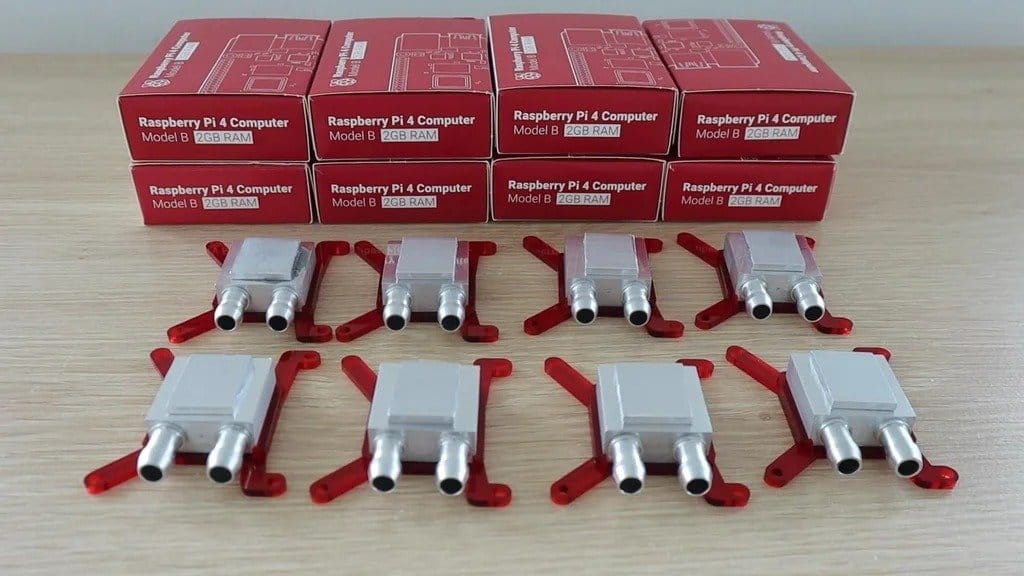 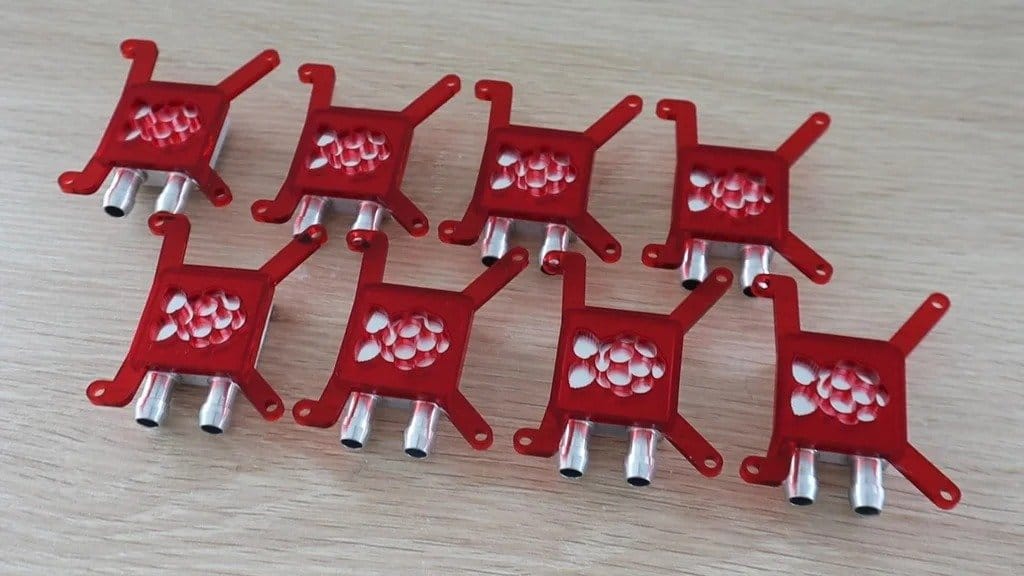 Step two: installing radiators
Then he installed heatsinks on the Raspberry Pis. Also applies thermal grease before assembly. As you can see in the photo, spacers are screwed to the board, with which it will then be attached to the base. 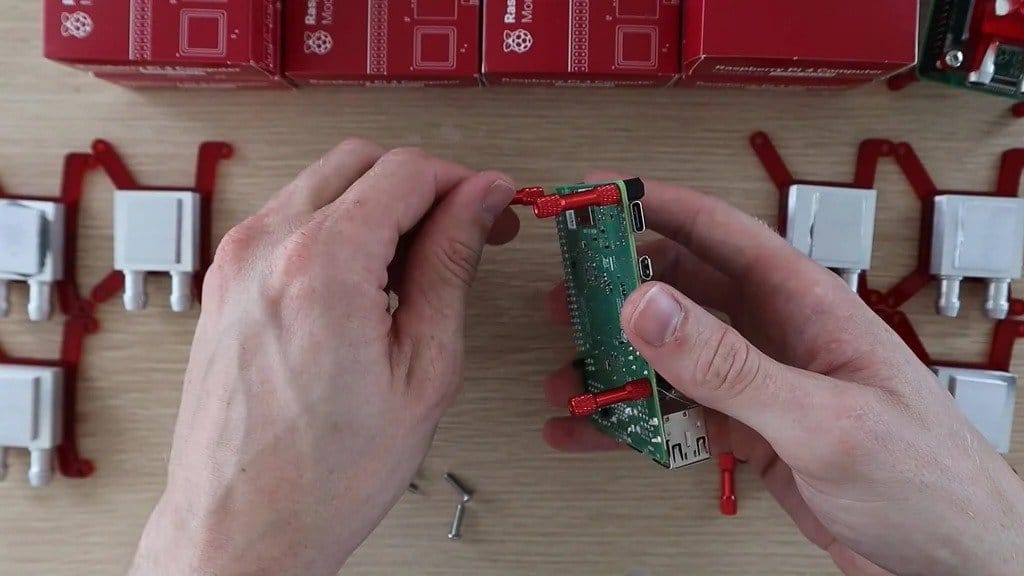 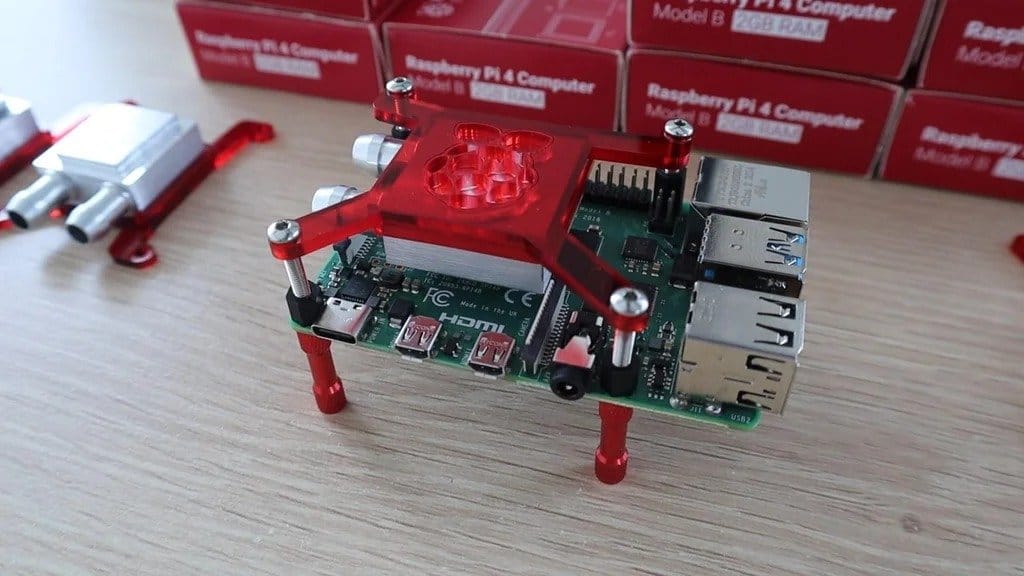 Step third: planning and layout of the cluster layout
Raspberry Pi clusters are traditionally built on top of each other with some clearance. This arrangement is not entirely suitable in this case and is not particularly striking. He wanted to try to build something a little different, something that would distinguish the device from others and could be fixed on the wall.
After going through several layout options, he eventually settled on a heatsink and fan in the center, with four Pi's on each side. The coolant reservoir and pump will be at the bottom of the cluster, and the Ethernet switch will be at the top. 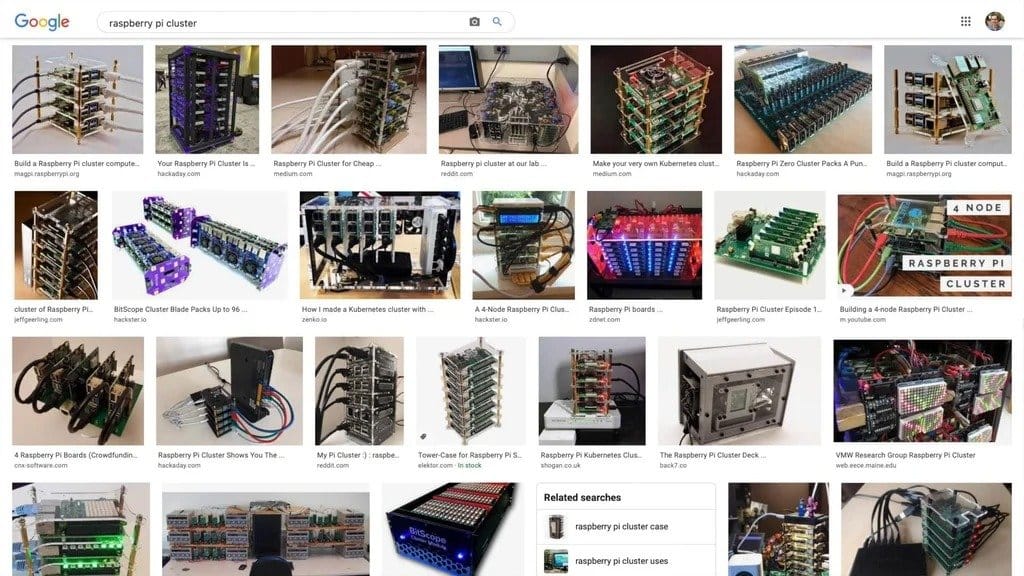 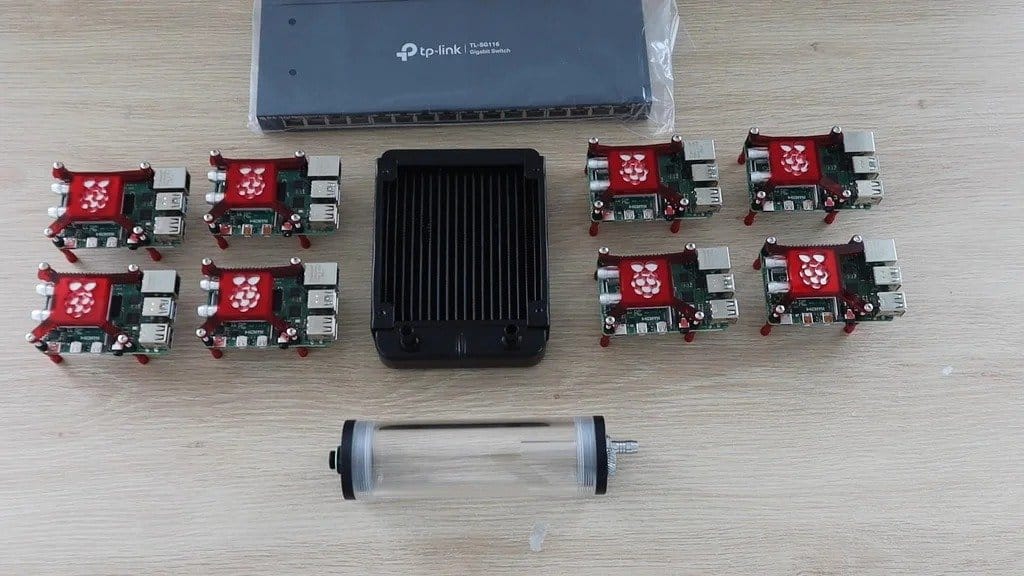 As soon as the layout was planned, it began to mark the location of the components on the MDF. Sheet size approximately 600 X 600 mm.
He plugged an Ethernet cable and a USB power cable into one of the Pi to make sure there was enough space between them to route cables.
There was a clear gap in the middle of the cluster above the heatsink. The old touchscreen he used in a previous project fits perfectly into that gap. This display can be useful for showing statistics or performance metrics for a cluster, or even running basic scripts from one of the Pi's USB ports.
Step four: base
He then designed an acrylic base for each block.
Each base consists of two layers of acrylic, a red bottom and a black top. The bases have holes for four attachment points, and a larger hole in the middle for routing the power cable from the Pi to the back of the board.
HE cut two pieces from translucent red acrylic and opaque black acrylic, then glued them together with acrylic glue.
Additionally, he designed and cut out some cable and tube holders to make it easier to attach them.
At first he tried to tie the Ethernet cables together, but it looked messy.
Also designed a bracket for holding the coolant tube. 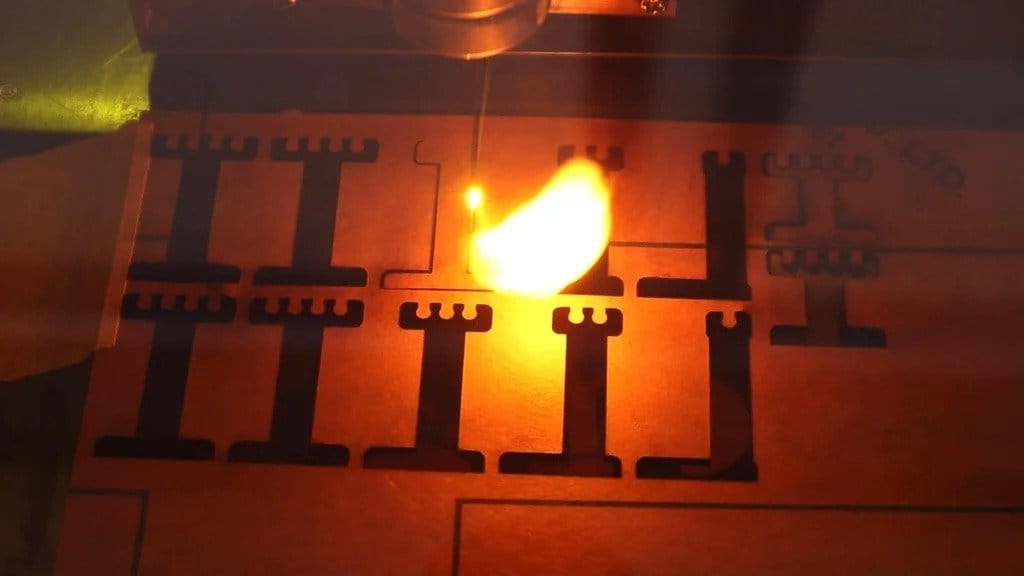 Step five: panel
Then the master proceeds to make a panel or a case on which all the components will be located.
He cut out a square, and then cut four corners under the diagonals. Using an engraver with a circular saw, he cuts two holes in the middle, one for the fan and the other for routing the cable to the display.
Then he drilled all the mounting holes. I glued three 20×40 mm wooden blocks to the back of the MDF with wood glue, this will stiffen the panels and move them away from the wall.
Cut out the holes for the Rusbury cables with a hole saw. Then I painted the panel with black paint. 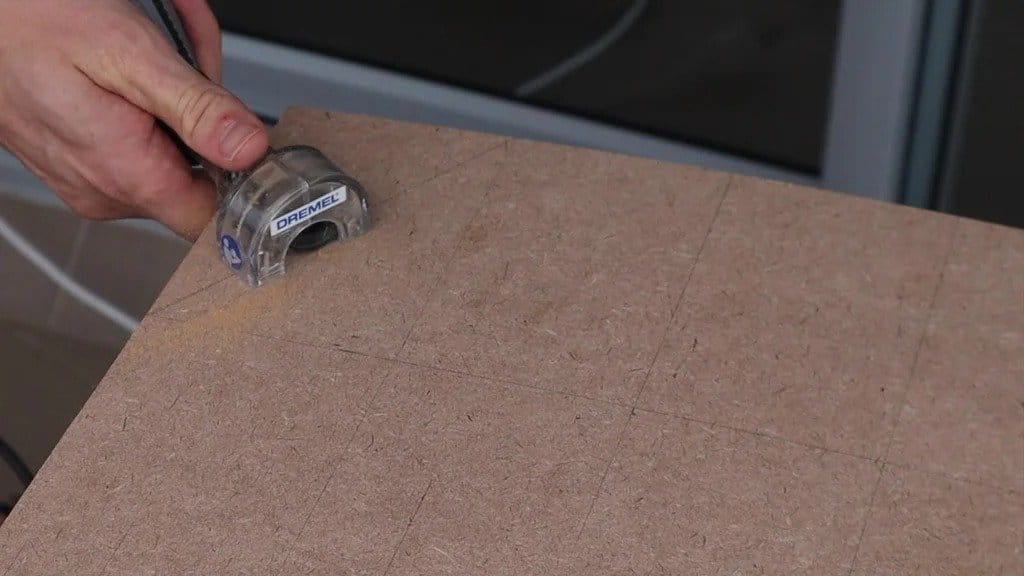 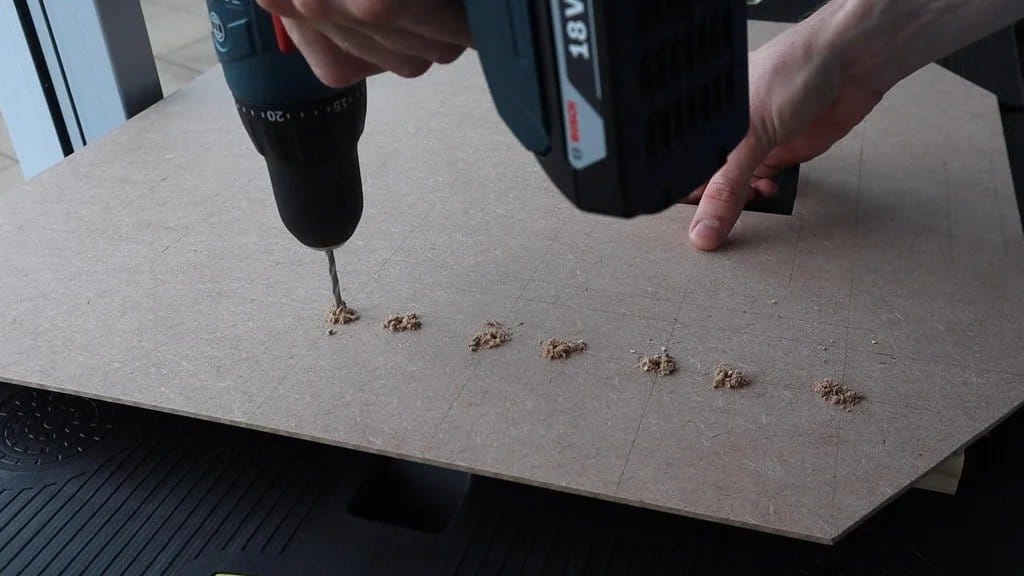 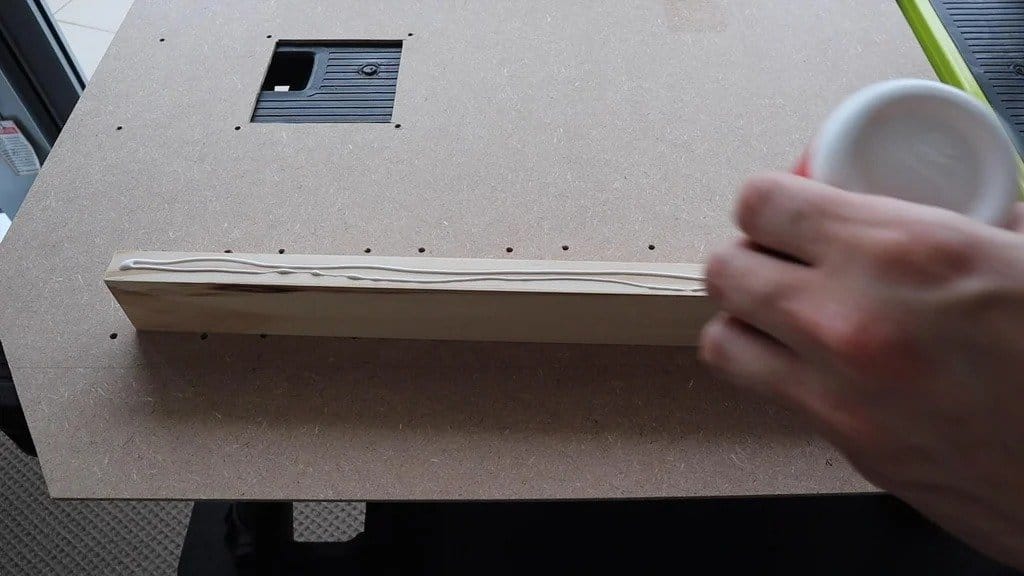 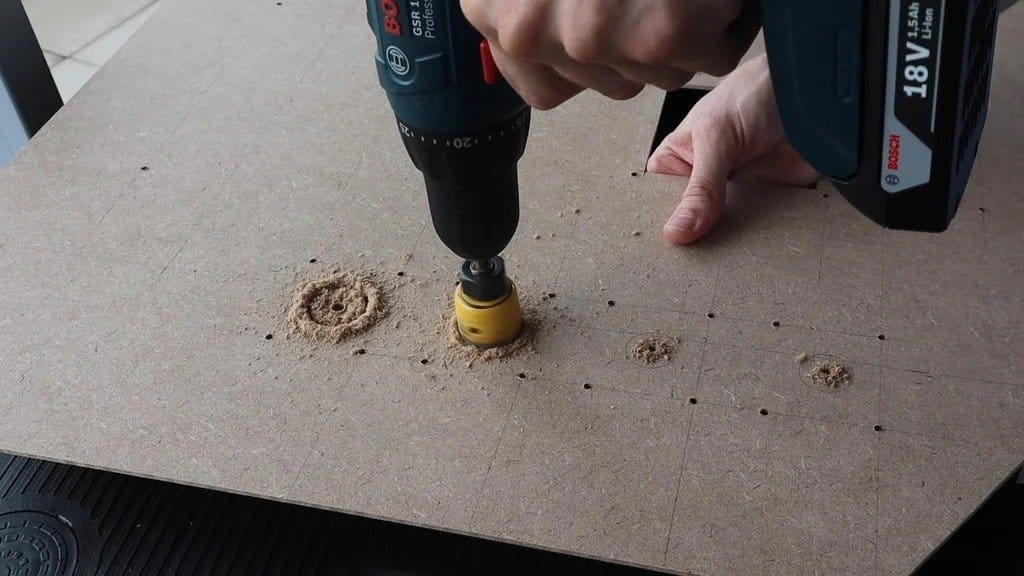 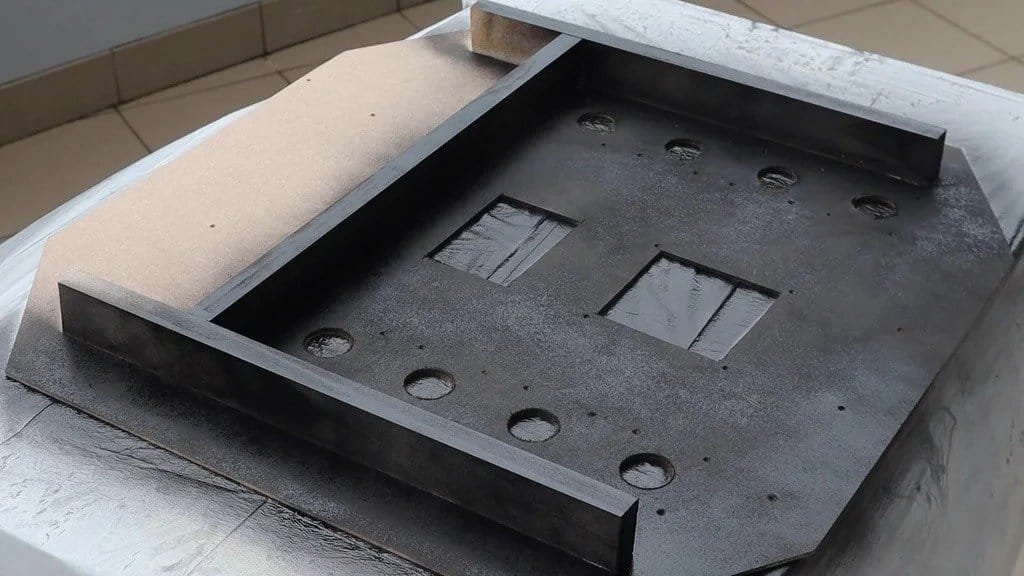 Step six: assembly
When the paint has dried, the master started assembling.
As previously mentioned, he used M3x8mm screws to secure each Pi cluster to the panel.
I installed the 8 Pi, then the cooling components and the switch. Installed an RGB LED strip to light up the wall behind the cluster. The ribbon comes with a remote control with different display colors and dimming options, the wizard has set a red tint. 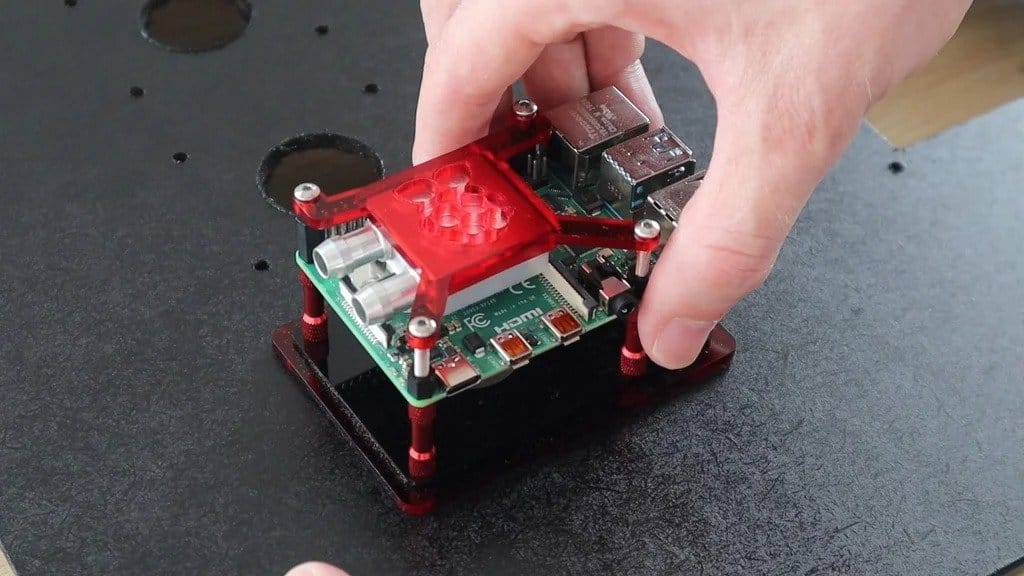 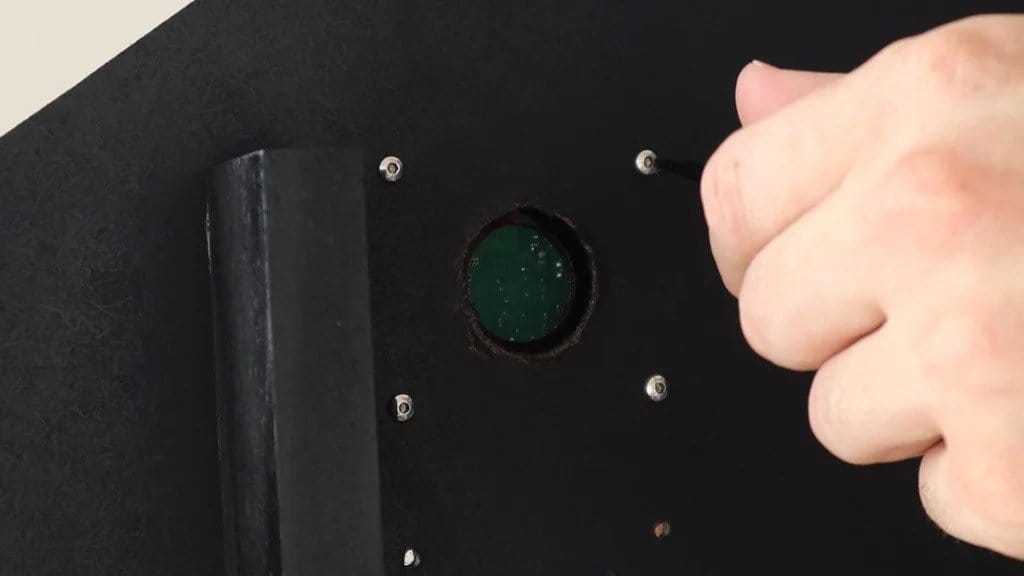 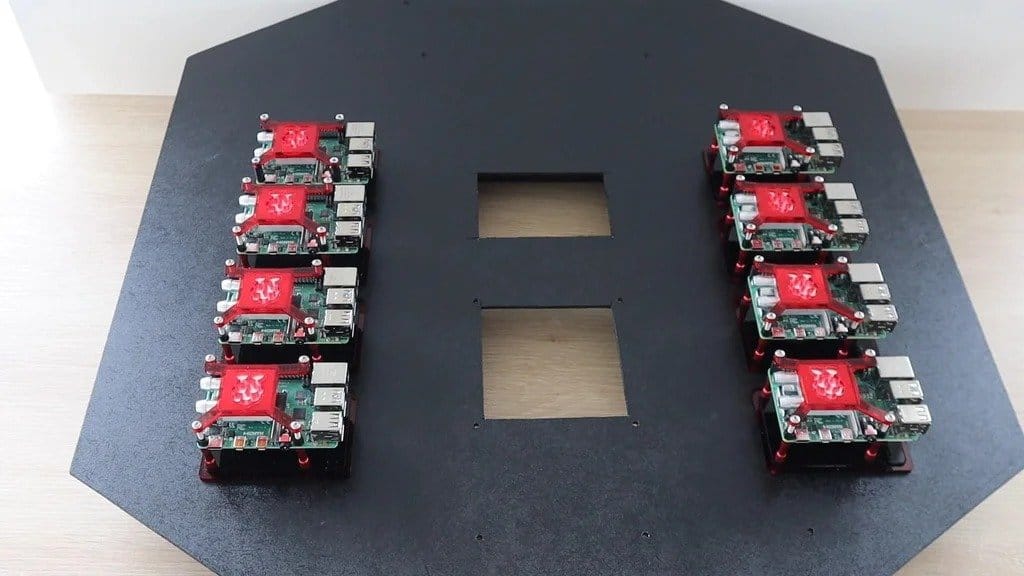 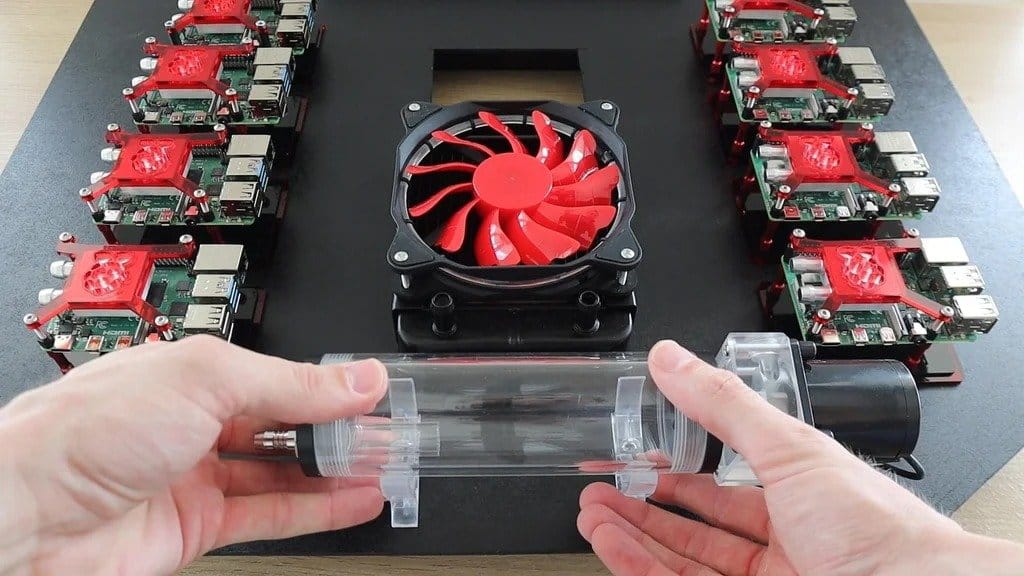 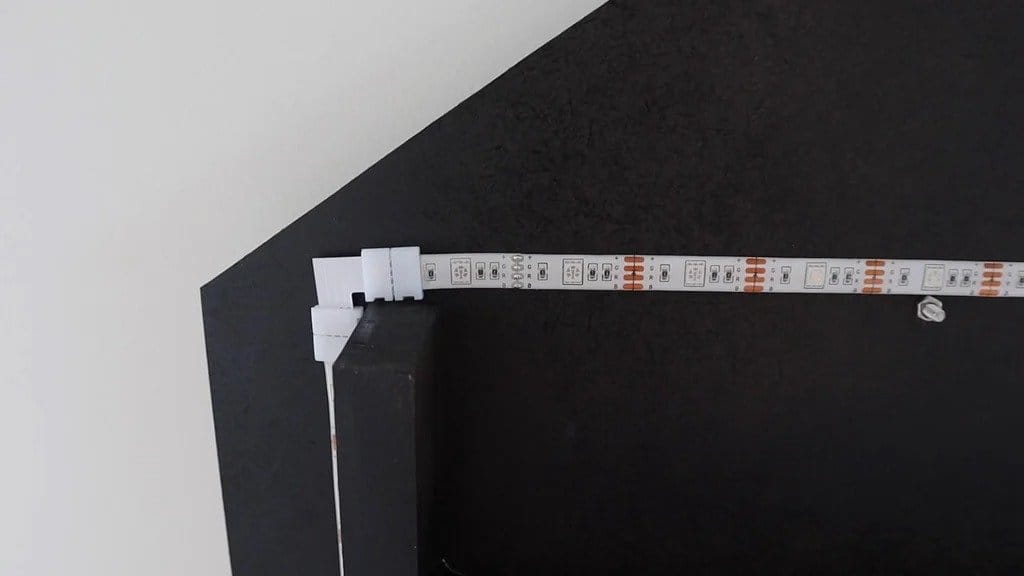 Then I connected a USB C cable to each Pi and passed them through the holes in the base and to the back of the board. I installed a USB hub and then plugged the Pi into the available ports. He had to use a splitter for the last two connectors as the hub only had 6 ports.
He is not sure if the hub has enough power to run all 8 Pi. The official power supply for the Pi 4 is a 3 amp power supply. But from experience, he hasn't seen the Pi run at more than 1 A. If necessary, you can always add a second hub later.
Then he connected an Ethernet cable to each Pi, routed them to the sides, pulled them through the hole behind display, and inserted it into the switch. 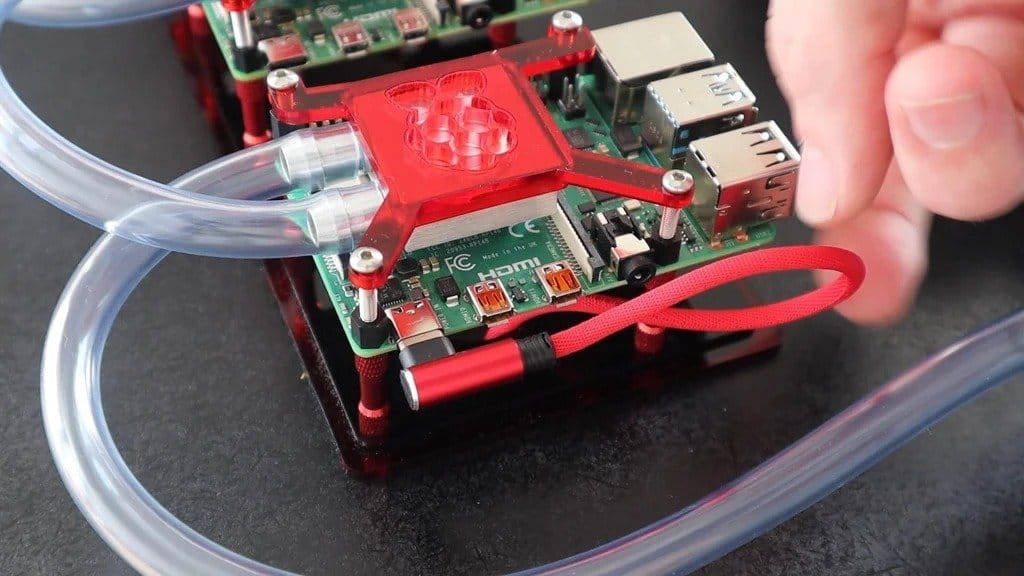 Then he cut the tube to the required length and installed them on the fittings.
The coolant (water) circuit is a sequential circuit, which means that water flows from one Pi to another before returning to the reservoir. This design has one major drawback, which is that the Pi is cooled at different temperatures. The first radiator receives the coldest water, and the water gets warmer as it passes through each radiator, with the warmest water flowing through the latter.
Another option is to place them all in parallel. But in this case, a valve would have to be added to each radiator in order for the flow rate to be balanced. Otherwise, it is likely that the Pi farthest from the pump will receive little or no water flow.
Once the piping was ready, the wizard installed the display. 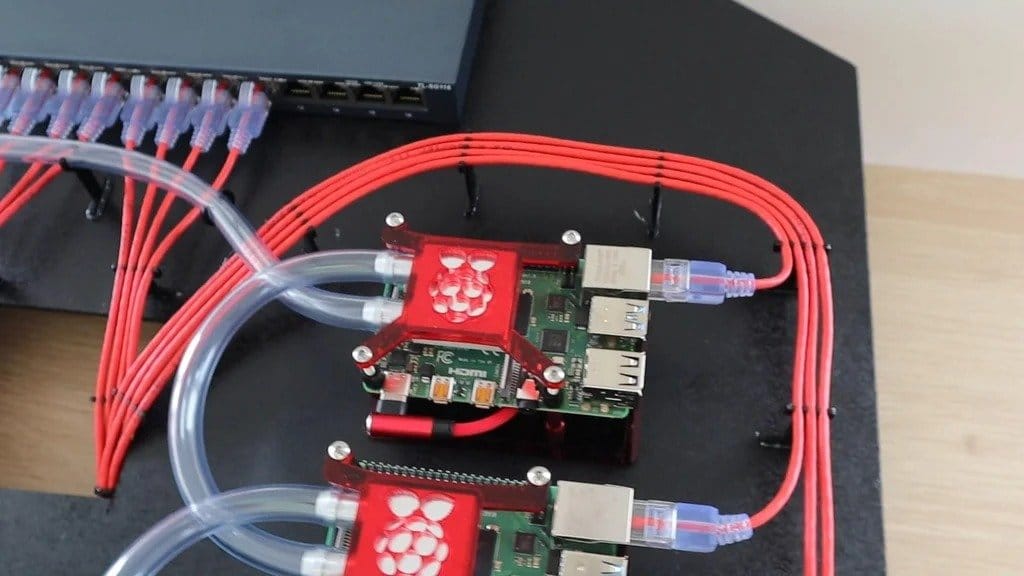 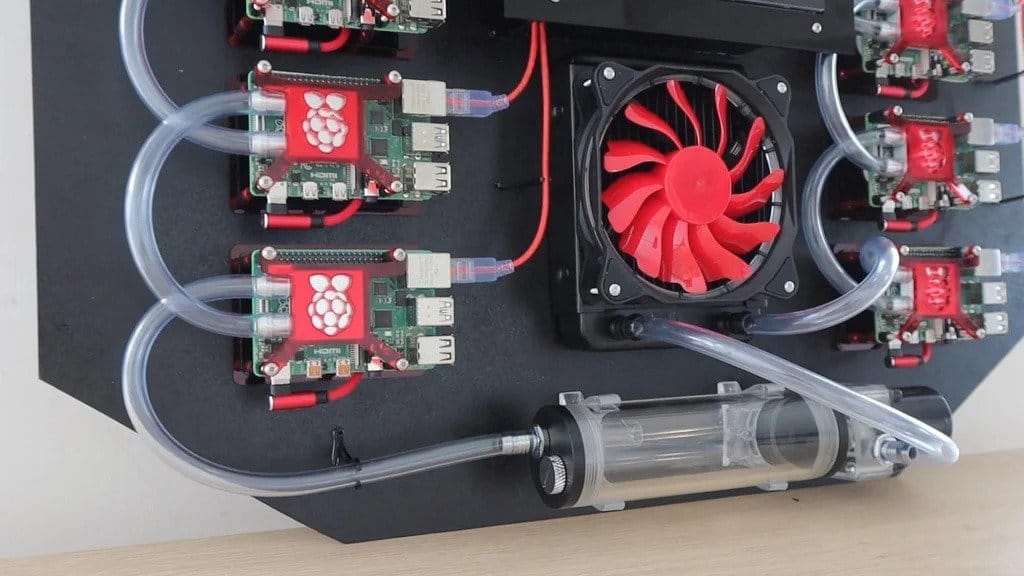 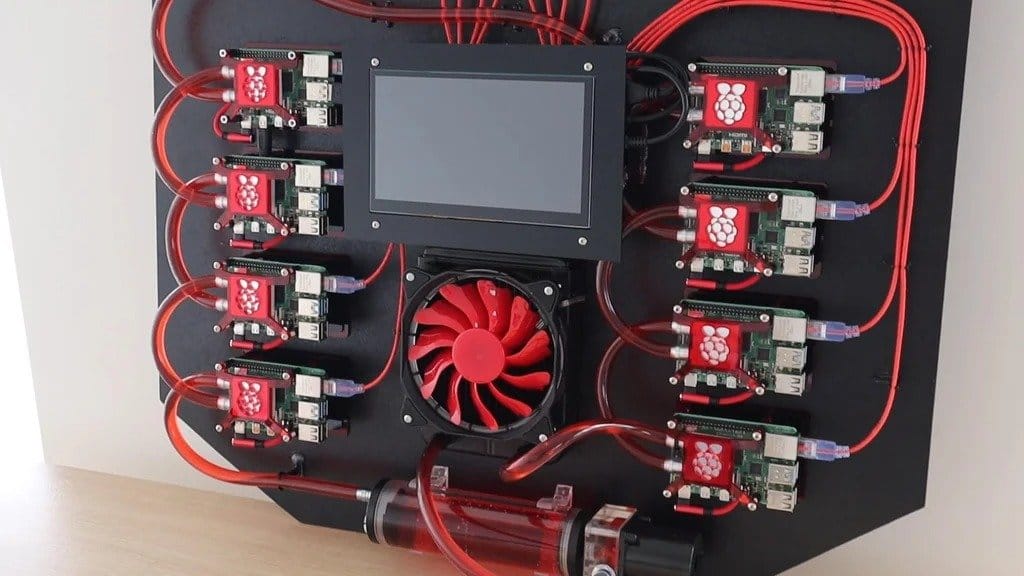 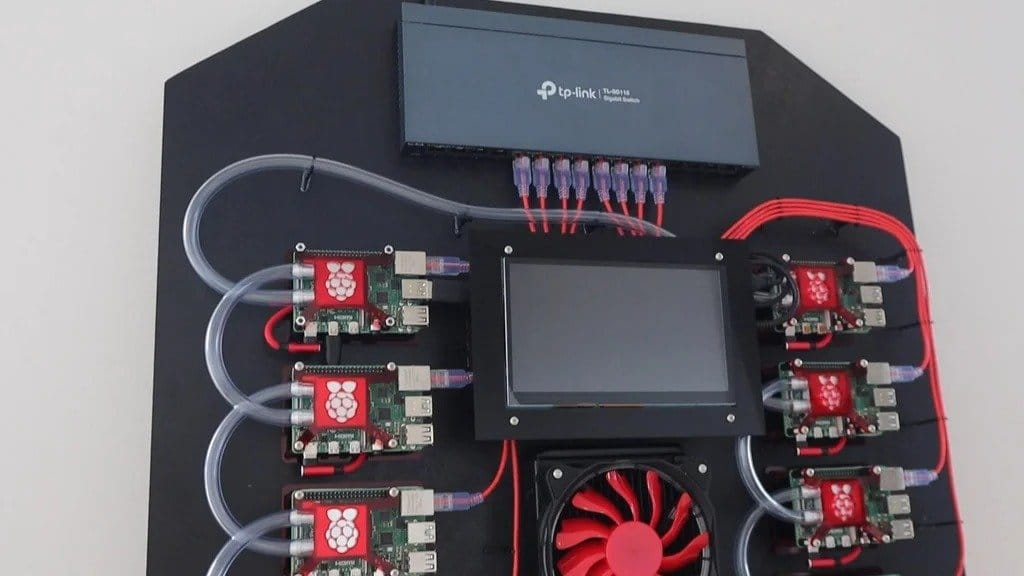 All cables were routed through the back of the panel, where they were then coiled and tied.
Step seven: filling the circuit with water and painting
Now you need to fill the system with water.
He put the cluster on its side so that the tank stood upright and then filled it. The Pi was powered off while filling, but had to turn on the pump and fan a couple of times to get water into the radiator and pipes.
When filling, there was one small leak at the inlet to the first block of cooling water, presumably due to a sharp turn towards the radiator. He repaired the leak by using a cable tie as a clamp.
Finally, he added a little red color to the water to accentuate the cooling pipes. 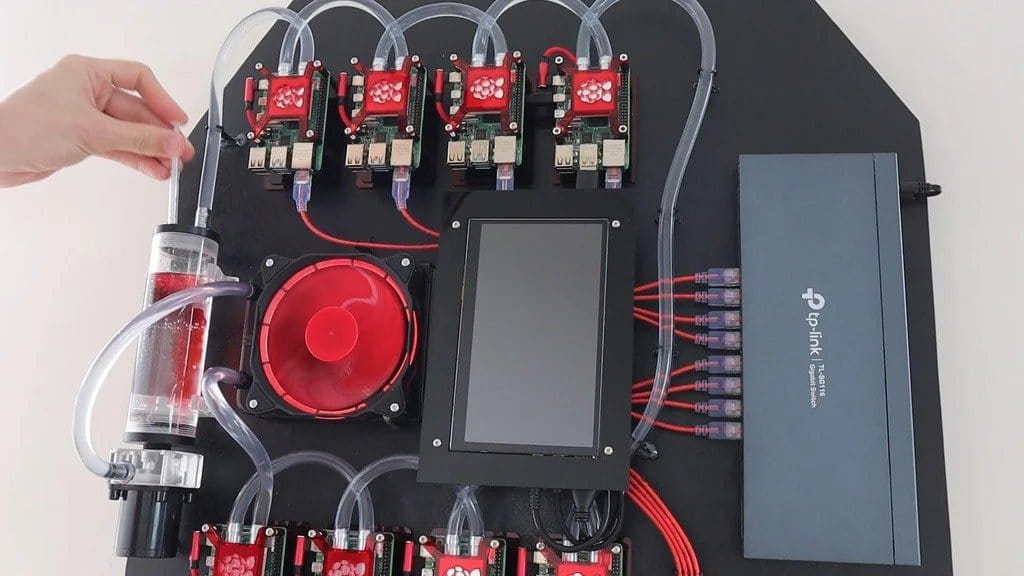 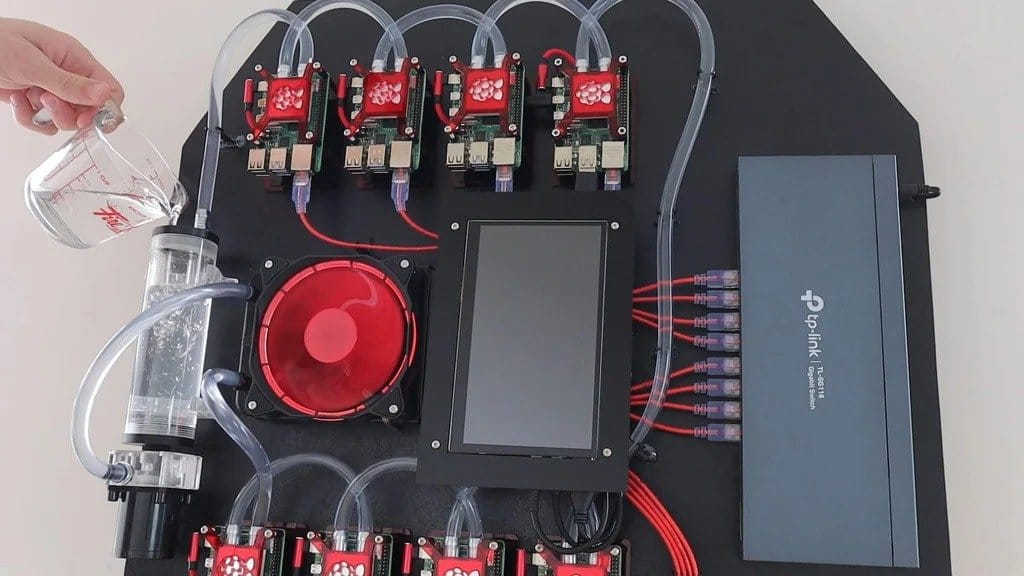 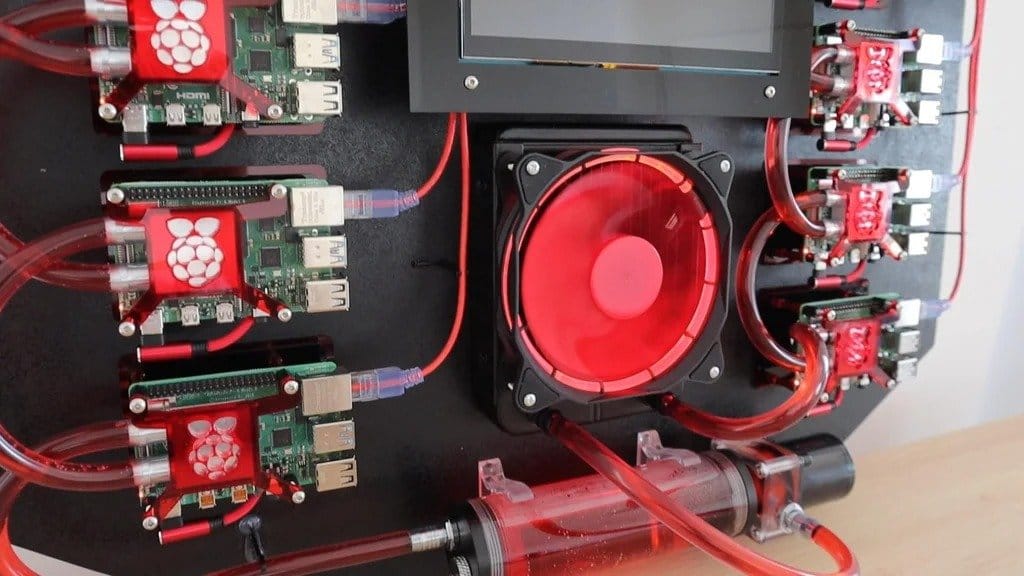 Step eighth: testing
The wizard installed the OS one of the cards for the Raspberry Pi of the main cluster, which was connected to the display, and then 7 copies of the Raspberry Pi OS Lite for other devices.
He does not go into details of the software part of the cluster in this build , since it largely depends on what the user is going to do with the cluster, what tasks to perform.
The preparation of SD cards was carried out mainly to check the operation of the device, whether Pis is loading correctly, whether they have enough power, how it works on the network.
It's time to turn on the device and wait for the operating system to load. All 8 Rassberi booted up normally the first time and immediately connected to the network.
The touchscreen also worked well. It's a little small for day-to-day use, but you can use it to launch applications, execute scripts, and display basic data. As an example, the wizard ran a script for monitoring processor temperature. 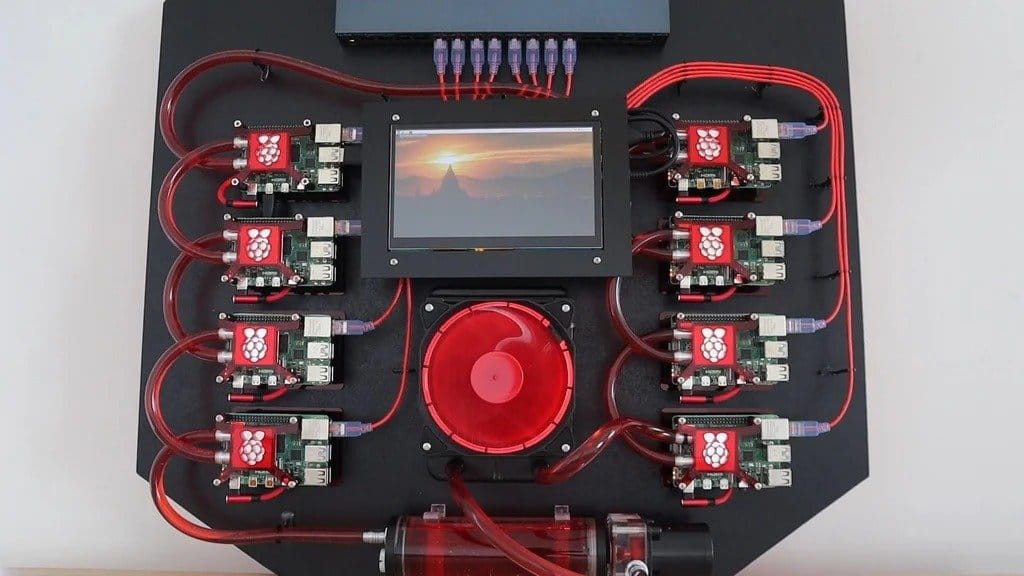 Everything is ready, and in the video below you can watch the entire assembly process of this device.

Carousel on a frozen lake