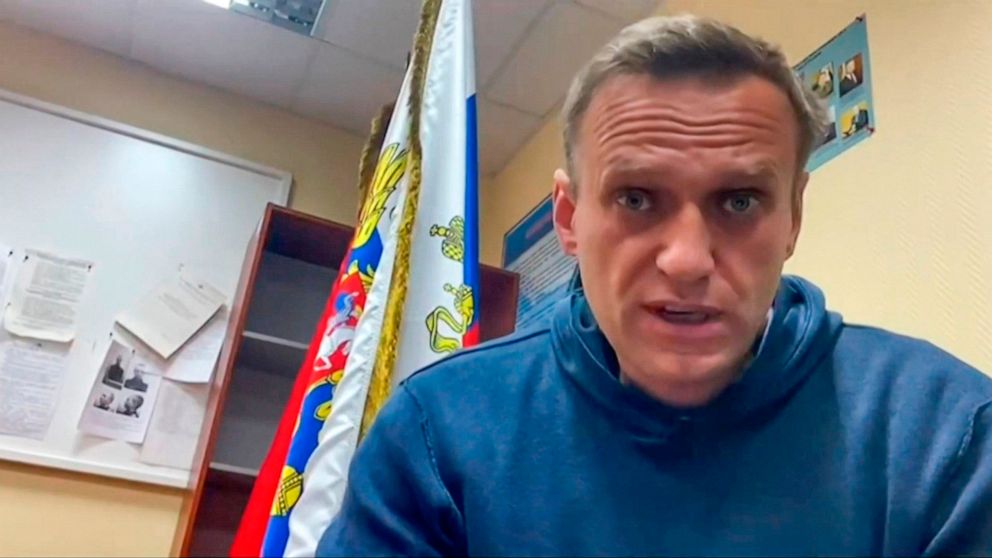 Russian authorities have extended the detention of opposition leader Alexey Navalny in a hastily organized court hearing on Monday despite growing international condemnation over his arrest a day earlier at a Russian airport.

Navalny was detained by police at passport control at Moscow’s Sheremetyevo airport as he landed in the country for the first time since his poisoning with a nerve agent last summer.

Navalny appeared in a court hearing organized inside a police station on the outskirts of Moscow. It was filmed and then posted online by his lawyers. The lawyers said they were informed about it just minutes before it began.

The judge ruled to satisfy a request by police to extend Navalny’s detention until Feb. 15, Navalny’s lawyer, Vadim Kobzev, wrote on Twitter.

Navalny and his colleagues denounced the hearing as a “mockery of justice” and called for his supporters to begin street protests. His team announced plans for a nationwide demonstration to start next Saturday.

“What’s happening here doesn’t have the smallest thing to do with the law of the Russian Federation,” Navalny said during the court hearing. What scared the authorities most were the protests, he noted.

“And so don’t be afraid — go out onto the streets. Don’t do it for me, do it for yourself and for your future,” Navalny said.

A small crowd of a few dozen supporters of Navalny were outside the police station, chanting for his release, in temperatures around -11 degrees Fahrenheit. No reporters were allowed into the court hearing, except for a few journalists from pro-Kremlin channels who were already inside when the hearing began.

Russia’s prison service has said it has detained Navalny for allegedly violating the terms of a suspended sentence from a 2014 trial where he was found guilty of embezzlement. The European Court of Human Rights has previously ruled that conviction was politically motivated.

Before Navalny returned, the prison service requested that his nearly four-year suspended sentence be converted into real prison time. A hearing is scheduled for Jan. 29.

Monday’s ruling means that Navalny will remain behind bars until the end of the month.

Navalny’s arrest has triggered a growing outcry from western countries, with some European countries calling for sanctions against Russia if he is not released. Ursula von der Leyen, the president of the European Union’s Commission, issued a statement condemning Navalny’s detention by Russian authorities.

“They must immediately release him and ensure his safety,” she said, adding that the EU would be monitoring the situation closely.

France, Britain, Germany as well as many other European countries also made calls for Navalny’s release.

Russia’s foreign minister, Sergey Lavrov, on Monday dismissed the demands, claiming that Western countries wanted to use Navalny’s arrest to distract attention away from problems at home. He accused Germany of inventing evidence that Navalny had been poisoned and said he was unconcerned by the criticism.

“We should probably think about our image, but we’re not young ladies going to a ball,” Lavrov told reporters.

Navalny had been recuperating in Germany following his poisoning with a Novichok nerve agent, a Soviet-developed chemical weapon used in the poisoning of the former Russian double agent Sergey Skripal in Britain in 2018.

Russian authorities took extensive measures ahead of Navalny’s arrival on Sunday. Moscow’s Vnukovo airport abruptly changed its rules restricting entry and a heavy police presence was deployed to prevent hundreds of Navalny’s supporters and journalists from meeting him. Police detained at least 40 people.

Navalny’s commercial flight was abruptly diverted to Sheremetyevo, a different Moscow airport, away from the waiting crowd.

Navalny said the manner of his detention and the court hearing showed that the Kremlin was afraid of him and his supporters.

“Why is everything so fast, why did no one know about this hearing? Because their approval ratings are high? Because they’re strong? No, of course not!” Navalny told his supporters in his video. “They’re afraid. And they’re afraid of you!”

Navalny is Russia’s best-known opposition activist and has a grassroots following thanks to his investigations into alleged corruption by powerful Russians officials and business people around President Vladimir Putin.

In recent years he has succeeded in organising unusually large street protests in Russia, sometimes gathering several thousand people in Moscow despite tough efforts by police to block them.

The Kremlin has denied any involvement Navalny’s poisoning, which he has accused Putin of ordering.

But last month, the independent group Bellingcat published an investigation identifying members of an alleged FSB hit squad who were present in the Siberian city of Tomsk when Navalny was poisoned. Navalny also published audio where one of the alleged agents unwittingly admitted to the plot in a call with Navalny himself, who posed as a senior Russian official.