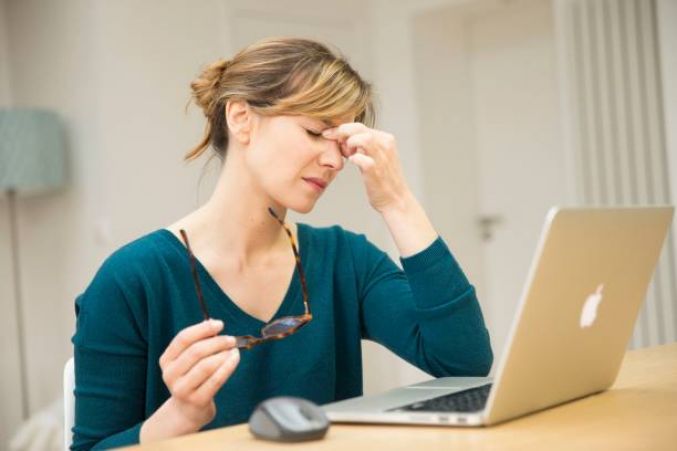 Even before the global Covid-19 pandemic began, people started to experience more issues around eye strain and headaches from being glued to their computers screens and phones so often.

Since it started though, there has been an explosion of people experiencing Computer Vision Syndrome (CVS). It is a condition where the eye’s muscles are unable to recover from the constant tension required to maintain focus on a close object.

The symptoms include headaches, tired, dry or gritty eyes. With people working from home so much, it can be hard to break the cycle of going from one screen to the next.

Speaking to BreakingNews.ie, Arthur Cummings, ophthalmologist at the Wellington Eye Clinic, spoke about what they have had to deal with since the pandemic.

One of the biggest changes he has seen since Covid-19 struck is the reason people give for seeking laser eye surgery. “It is very common now for people to come in and say they want eye surgery because their glasses keep fogging up,

“I have been doing this for 26 years and I have never had someone saying they want surgery because of that.”

For clarification, an ophthalmologist is a medical doctor who can perform medical and surgical interventions, while an optician is a professional who can help fit eyeglasses, contact lenses, and other vision-correcting devices. Some professionals train as both.

Speaking about the main issues, Dr Cummings said: “People are complaining about their glasses fogging up from wearing masks. Another thing is that more people are getting infections, and they are getting styes and eyelid infections.”

He said this is because people are breathing in bacteria that is usually out in front of them, and they are now breathing over their eyes.

People also have to be very careful after laser eye surgery because they can get a post-operative infection. Dr Cummings said people should tape down their mask after surgery to avoid any infection.

A new syndrome has also arisen since the beginning of the pandemic called MADE (Mask Associated Dry Eye). According to Dr Cummings: “One of the ways you lose tears on the surface is from evaporation. Because your mask warms up our face, your tears are evaporating more frequently.”

While masks are having a huge effect on people’s eyes, by far the most common complaint has been CVS.

One of the most striking things is that you are six times less inclined to get up from your desk while working from home, he said. With some people having to spend all day on Zoom meetings, it is having a very real effect on our eyes.

“We used to blink with enough force that the upper and lower lid would touch. When they touch they release oil which covers the surface of the eye and stops them from drying up.

“When looking at a computer screen, 87 per cent of people’s eyelids do not touch when they blink. If they blink now they are not releasing oil any more.”

As he said not only have been people got CVS, over the past number of years there has been a huge increase in people becoming short-sightedness (also called myopia) as well.

Dr Cummings said “It can normally start at six or seven because of too much screen time, holding devices too close and overexposure to blue light.

Another key thing is that people are not getting enough outdoor activity with actual sunlight.

It helps refocus your eyes away from the screen and to stop you from looking at something that is right in front of you all the time.

He said the one thing that those who are looking for laser eye surgery, those who are thinking about cataract surgery and those with dry eyes, all have in common is that they have some form of CVS.

So while it can be hard to switch off and pull ourselves away from our screens, making sure we look after our eyes and giving them a break is so important when so many of us are stuck working from home.